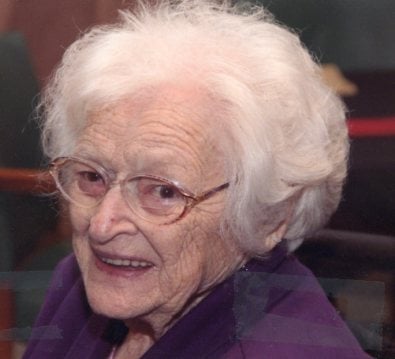 Wilma L. Brown, age 95, formerly of Globe Street in East Liverpool passed away at the Ravenswood Care Center in Ravenswood, WV on Tuesday, September 25, 2012 following a lengthy illness. The daughter of the late William and Elizabeth Freeman Miller, Mrs. Brown was born in Wick, WV on November 8, 1916 and lived most of her life in this area prior to moving to Ravenswood.
Mrs. Brown had been employed as a finisher at the former TS & T Pottery for 25 years, retiring in 1978. She was a member of the First Church of Christ Disciples, where she served as a Deaconess, a member of the Sigma Alpha Class, The Christian Women Fellowship, and the Ladies League of the Church and it’s quilting circle. Mrs. Brown was also a member of the Odd Fellows Lodge # 286.
She was preceded in death by her husband, Robert LeRoy Brown who she married on February 2, 1937.
Survivors include her son: Donald P. Brown, Sr. of Nashua, N.H.; three grandchildren, Beth Ann Reeder and her husband, Keith, Melaine Dawn O’Brian and her husband, James and Donald Brown, Jr.; six great-grandchildren, Cameron Reeder, Vanessa Reeder, Kyle Reeder, Joshua Reeder, Ian Brennan and Collin Brennan; three special nephews, William Allison, Earl Smith, Jr. and John R. Myers as well as several other nieces and nephews.
In addition to her parents and husband, she was preceded in death by four brothers, Russell Miller, William Charles Miller, Harold Miller and Melvin Miller; two sisters, Merle McPherson and Zelma Allison.
Services will be held at 11:00AM on Friday, September 28, 2012 at the Calcutta Chapel of the Martin MacLean Altmeyer Funeral Homes with Rev. Charles Adkins of the church officiating. Burial will follow in Spring Grove Cemetery.
Friends may visit with the family today from 5:00 to 7:00PM and up until the time of the service on Friday at the funeral home in Calcutta.

I am sorry to see the loss of Wilma. She was a sweetheart with a great sense of humor. My late husband and myself were in her 500 card club and I always enjoyed the time we spent together. God bless you at this time.