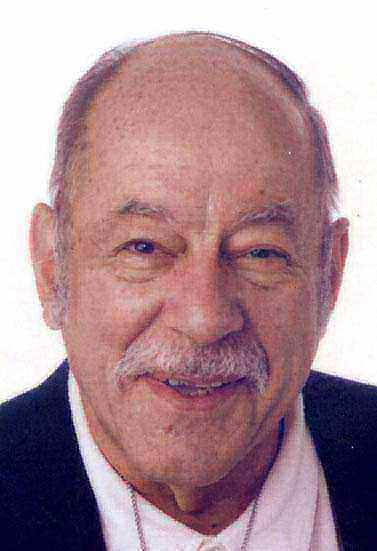 ROSE, William L., 78, of Elm Grove,WV, was called home on Monday, July 3, 2006, surrounded by his loving family at the Washington Hospital, Washington PA, after an extended illness.
Born in Wheeling WV, on February 20, 1928, William was the son of the late William L. and Gertrude Leithe Rose. William was the beloved husband of Jean Stefani Rose, to whom he was married for 56 years. In addition to his wife, he is survived by his children: David and Susan Rose of Pelham NY; Scott and Suzanne Rose of Wheeling; and Janet “GiGi” Rose of Nashville, TN; grandchildren: Lila and Will Gerald, Katelyn Rose, Barbara Robbins, Mark Robbins, and Nicholas Harrison; his brother, Benjamin L. Rose of Wheeling; and sisters, Helen Roberts of Fairmont WV; and Jean Rose of Dumont NJ. He is also survived by his sister in law, Ann Dittrich of Wheeling; nieces and nephews: Tom and Stephanie LaFlam and Charles Dittrich; and many other nieces, nephews, grandnieces and grandnephews.
In addition to his parents, William was preceded in death by his brother Moss Rose, his sister, Alice L. Thompson, and two infant sisters.
He was a 1946 graduate of Linsly Military Institute of Wheeling and a 1949 graduate of the General Motors Institute, Detroit, Michigan. An avid supporter of the Boy Scouts of America, William was recently honored for over 50 years of service to the organization. As a leader on the BSA, he received the District Award of Merit, Silver Beaver and Distinguished Commissioner Award, and was the Vigil Member of the Order of the Arrow and Program Head for Commissioner’s College, Ripley WV. Proud of his German heritage, William was also a member of the Black Eagle Lodge, Munich, Germany. He was a member of St. John’s United Church of Christ, Masonic Lodge Nelson #30, Elm Grove Lions Club, North American Vexillological Society, US Naval Institute (Annapolis MD), Wilderness Rangers of WV, the Audubon Society, and the National Wildlife Organization. He was honored to receive the Great Seal of West Virginia from A.J. Manchin.
William was the retired owner of A-1 Appraisal Service, Wheeling. After his retirement, he was also employed by Christopher’s Cafeteria and as a tour guide for the Kruger Street Toy and Train Museum in Elm Grove. Also known as Wheeling’s own “Benjamin Franklin”, he often dressed in costume to delight local youngsters, scouts, and visitors to the museum. His large collection of flags was often displayed at Scouting events and at the museum. William was fondly remembered by his family as the designer of the “Chambers Avenue Bottleneck”. He also enjoyed bird watching and collecting stamps and coins.
Friends will be received at the Altmeyer Funeral Home, 154 Kruger Street, Elm Grove on Wednesday from 2-4 and 7-9 pm where services will be held on Thursday at 1:30 pm with Rev. Ed Thurmond officiating. Entombment will follow at Mt Calvary Cemetery Mausoleum, Wheeling WV. Memorial contributions may be sent to the American Diabetes Association, 1221A Ohio Ave., Dunbar WV 25064. Online condolences may be expressed to the family at altmeyer.com.

Bill always lifted our spirits at the Boy Scout’s Commissioner College with his enthusiasm and his stories. Yet, he also was one of our best teachers because he was knowledgeable and able to keep the students interested. I fondly remember both his fun songs “Top Notcher” and patriotic closings.

Dear Mrs Rose,Scott,David and Janice, I am saddened by your loss,

I greatly admired Mr. Rose and have thought of him often when I find myself hiking in the mountains, or trying to capture a bird on film. Of the times he took us camping as a boy scout leader. The countless days and evening spent at your house. The places he took me and the kindness that he showed.

I was asking my dad about him, as I was wanting to talk and visit with him on my next trip back. I regret that I didn’t get a chance to make that vist.

I do not know the words to consol or comfort you but Mr. Rose was a good and honorable man. I do believe that the following verse from Micah did pertain to Mr. Rose,

And what does the Lord require of you? To act justly, to love mercy and to walk humbly with your God. Micah 6:8

I will pray that God will give you strength and courage over the coming days and months. That God will provide you with comfort and peace. And as time passes may the pleasant memories never fade but grow stronger.

Mr. Rose was well liked and admired. I am sorry but I’m unable to call him Bill respect for my elders or something like that.

On behalf of Troop 111, Bellaire, OH, we offer our deepest sympathies at the loss of your loved one.

We are gathering around now at Camp Stigwandish in Madison, OH at summer camp.

We remember when he came to visit us in 1993 here at Camp Stigwandish, where we were taking Wood Badge training.

When we got back home Mr. Rose served as our Wood Badge counciler.

We have had many fond memories of Mr. Rose and his dedication to scouting.

May the Lord be with you in this time of sadness.

Sorry to hear about your loss. Our thoughts are with you and your family.

Mr. Rose will be sadly missed by this Eagle scout and his parents. On June 5, 2005, Mr. Rose kindly came to my Eagle ceremony in New Martinsville. We last spoke this winter at the Follansbee scout dinner. He was a wonderful man.

I am sorry to hear about Mr. Rose. I have not seen any of you in many years, I still think about everyone back in Wheeling. I will keep you in my thoughts and prayers.

Patty and I share your grief. Jesus told us in the bible to share one another’s joys and sorrows and we follow that teaching. We love you and you and your family are in our prayers.

You and your family have may deepest sympathy. For the years that I knew Bill while working for UAC and seeing him occasionaly at the mall, he was always ready with a smile. I enjoyed working with him and will remember him fondly.