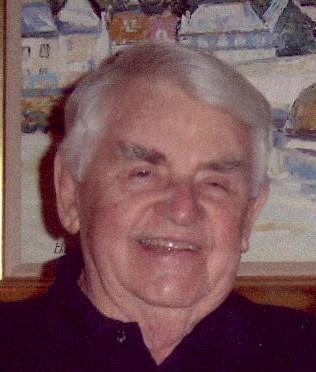 William John Schewe, M.D. died on August 8, 2009 at Atlantic Shores in Virginia Beach, Virginia. He was born on February 24, 1919 in Vandalia, Missouri to the late William Henry Schewe and Ella Mae Langhauser Schewe. Dr. Schewe graduated from Vandalia High School, the University of Missouri with a B.S. Degree and graduated from George Washington Medical School in 1943.

He joined the Navy in 1943, serving for four years. Part of his service was in the Pacific on the destroyer, USS Thatcher, as the ship’s doctor. The ship was crippled by Kamikazes. He resigned his commission in 1947 after becoming a flight surgeon.

Mary Lou and Bill Schewe retired to Virginia Beach in 1984, living mostly at the north end. They moved to Atlantic Shores in 2003.

The funeral service will be held at Arlington National Cemetery on Tuesday, October 6th at 10:00AM.

Condolences may be shared with the family at altmeyer.com

I am very sorry to hear of Dr. Schewe’s death and send sincere condolences to you all.

Dr. Schewe brought much joy to the Carroll family. Laughter filled our home when he was there! I have many fond memories of those years when the Schewes and Carrolls were together.

He will always hold a special place in my heart for all the years of loving medical care and friendship he gave to me and my family. He was a doctor like few others, and has been sorely missed since he retired. My deepest sympathies to his family.

You are in our hearts and minds. Our deepest sympathy to you and your family.

Please accept my sincere condolences regarding Dr. Schewe’s death. I really enjoyed the times in the past where he and I could speak about a variety of subjects. He was a great man and I know his sons and grandchildren loved and admired him. I have had many conversations with your son Bill over the years. He has wonderful memories of his childhood with you both. I also know that my former law partner’s wife, Marie Kilcarr, loved him and almost spoke of him in the highest terms. Don McIlvaine considered him a second father.

I often tell Bill that living long lives is the best gift our parents can give us. Children only really appreciate their parents after we become parents ourselves and understand the concerns and struggles you had raising us. And, being a grandfather myself to two beautiful girls, I know how loved we are by our grandchildren and how we live on through them.

I look forward to celebrating his life with you in September.

Please accept my deepest sympathy on the loss of Dr. Schewe. I had the pleasure of working with him for several years at Northern Virginia Doctor’s Hospital. He was always a ray of sunshine in my day as well as his patient’s.

My husband Bill who was a barber cut Bill Jr’s hair for many years.

May he rest in peace.

I want to send my deepest sympathy to you all. My grandfather had the great opportunity to practice medicine with Dr. Schewe. Our families have been close ever since. Dr. Schewe will be missed greatly by his family, friends, and those he served!

To the Schewe Family:

Please accept our condolences at the passing of Dr. Schewe. For many years until his retirement, Dr. Schewe was the family physician for my parents, Bob, Sr. and Dorothe Willey. He was also my physician during my high school and college years. Dr. Schewe took great care of my parents and was highly respected by our entire family. We need more doctors today like Bill Schewe. May your memories of Dr. Schewe provide you with comfort at this time.