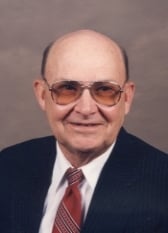 William H. Emmerling, Jr. 84 of Osbourne Road, Wellsville, OH died Monday, July 29, 2013 at the
Vista Care Center in Lisbon following a lengthy illness. He was born in East Liverpool, OH on
December 31, 1928 and was the son of the late William H. & Phyllis Harrington Emmerling, Sr.

Living his entire life in the area, Mr. Emmerling retired in 1993 from BOC Industries where he worked as a
mechanic for 10 years. He also worked as a foreman for OS Hill and Murray Trucking, he owned his
own trucks and drove for Service Transport, had owned and operated the Pennzoil Gas Station in
Chester, WV, was an Auto Mechanic Teacher at East Liverpool High School and had his pilot’s license.
Mr. Emmerling was a graduate of East Liverpool High School, a veteran of the US Army serving in
Germany during the Korean War and a member of Yellow Creek Presbyterian Church where he
was a former elder. He was a member of Teamster Local 92 and used to build Studebakers and
owned his own an Avante.

His wife, Phyllis Cornell Emmerling survives him at home. They were married October 3, 1963.
Also surviving are two sons, William H. “Buddy” Emmerling III and his wife, Cindy of East
Liverpool, OH and James Michael Emmerling and his wife, Cathleen of Sheffield Lake, OH; two
daughters, Terri Poynter and her husband, Coleman of Lisbon, OH and Crystall Flint and her
husband, Jeff of Michigan; a sister, Dorothy Gibbs of Massillon, OH; eight grandchildren
and several great-grandchildren.

Services will be held at the Calcutta Chapel of the Martin MacLean Altmeyer Funeral Homes on
Thursday, August 1, 2013 at 11:00 AM with Rev. Derek Marotta of the church, officiating.

Memorial contributions may be made to the Alzheimer Foundation.

I love you Daddy!!! I will miss you alot!! I really didn’t get to know my daddy until the last 4 years! I’m so glad I got to take care of you in your last years!!! I’m also glad I finally got to be “Daddy’s Little Girl” !!!

I’m sorry for your loss…I have very fond memories of Bill…he was a good influence on all of us.

May the love of God surround you and your family during this difficult time May you come to know that the love of God is with you always, may your memories of William H. Emmerling Jr give you peace, comfort and strength…

So sorry to hear of Bill’s passing, he was one of my father’s best friends. My dadDick Russell passed away in August 2009 and he was always reminiscing about he and Bill’s exciting adventures. What wonderful fun they must have had when they were young. The motorcycle stories dad shared always made me laugh! Bet they are now up in the clouds laughing, slapping each others backs and reliving those carefree days! I miss my dad tremendously but do know he is not in pain and in a better place. Hopefully you can feel that comfort too because Bill is now with his long time buddies…just like the good ole days.

Terri and family: My thoughts and prayers go out to you during this difficult time. May God give you comfort and let your memories get you thru this.

To the family of Terry and Buddy,my god wrap his loving arms around you and your family in this time of grief ad sorrow.Karen Fotheringham Stewart.