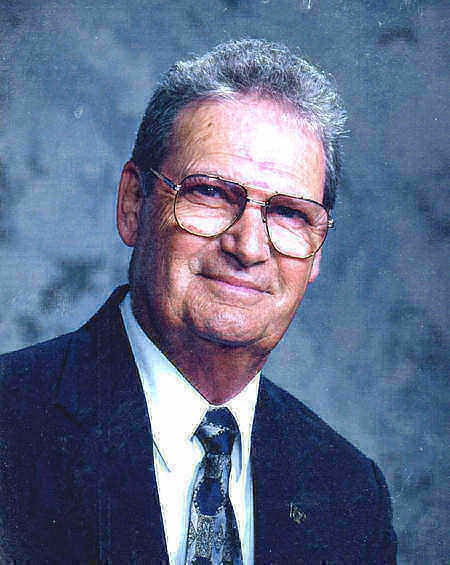 William G. “Bill” Kennedy of Bellaire, Ohio died Tuesday, December 13, 2011 at the Wheeling Hospital in Wheeling, West Virginia.
He was born in Wana, West Virginia a son of the late E.O. and Cecyle Rose Kennedy and later moved to Windsor Heights.
Bill was a retired Vice President of Marketing for Valley National Gases and formerly worked at the Cardinal Plant in Brilliant, Ohio. He was a member of Ionic Lodge 438 F & AM Bellaire, Ancient Accepted Scottish Rite, Valley of Steubenville, Osiris Shrine, Legion of Honor, American Legion Post 38, Martins Ferry, Ohio, Sons of Italy Lodge 754, Bellaire, Ohio.
In addition to his parents, he was preceded in death by his sister and brother-in-law, Shirley and Ted Pavlic.
Surviving are his wife of fifty-four years, Myrdith Nelson Kennedy, his daughter and son -in-law, Misty and Bill Kahl of Bellaire, Ohio, his granddaughter, Devon Kahl, his pride and joy. Also two sisters, Sharon Bill Rinderer of Martins Ferry, Ohio, Sandy Wyatt Sine of Fairview, West Virginia, one brother, Don Margie Kennedy of Seneca Falls, New York and several nieces, nephews and friends.
Family and friends will be received at the Bauknecht-Altmeyer Funeral Homes & Crematory 441 37th Street Bellaire, Ohio on Friday from 2 to 4 and 6 to 8 pm where services will be held on Saturday at 10 am with Rev. Donald R. Kennedy officiating. Interment in the Holly Memorial Gardens in Pleasant Grove, Ohio.
Masonic services will be conducted at the funeral home on Friday at 7 pm.
Memorial contributions may be made to the Belmont County Animal Shelter, 45244 National Road, St. Clairsville, Ohio 43950. or the charity of the donor’s choice.
Share your thoughts and memories and view Bill’s tribute video at altmeyer.com.

At a time in my life that I had convinced people that I could handle a new job It was Bill that lead me Thur some pretty ruff waters and showed me that I could handle it, I have been here 29 years and counting thanks to him, He always new how to calm me down when I called him up to complain, he will always be a part of me and I am a better person for knowing him Thanks Bill for everything.

Bill was a real gentleman who always treated others with respect and greeted you with a warm smile and a firm handshake. He will be sadly missed, but never forgotten.

It is with great saddness I receive this information. I considered Bill a true friend, a fellow Veteran, a brother of the Lodge, and a Patriot of our country. May our Lord and Savior grant you comfort and welcome Bill into heaven. I look forward to seeing him again in eternity. Sincerely, John R Bushwack

Dear Myrt, We are sorry to hear of Bill’s passing. We had heard that he had been very sick.

The years have flown by and we haven’t seen much of you in such a long while. But I Kay will always remember his since of humor and good looks. I was always proud to be his cousin.

God bless you and the rest of the family. Kay and Frank

Dearest Myrt, I’m hurting with you at the thought of losing Bill. He’ll always hold a special place in my heart of hearts because you two have always been part of my mom and dad’s life. God help you through this and give you strength to speak of him to all of us who love you. If you need anything, call me. Our hearts ache with yours but KNOW Bill has found his nitch with those who preceded him and have been waiting. I love you..all my hugs and condolences are yours.

i am sorry to hear of bills passing, i remember bill and myrt from my younger days as i helped my dad deliver milk to them in west bellaire he and his family were super nice people. may he rest in peace, ronnie doty

I had the pleasure of meeting Bill as a patient in Benwood. He always made me smile. His stories were great!

I had the pleasure to work with Bill and shared many trips with him. he was quite a character, and we enjoyed each trip we made together. May God bless the family and take care of them. He will be missed deeply.

I had the priviledge and honor to know and work with Bill for only a short time. The happiness and bright spot he brought to each day that i saw him will always be treasured. He was a rare and unique person that shared so much of himself so unselfishly, just to help someone else have a good day or to cheer you up. He will be missed always.

with affection and sympathy,

I just happened to see the obit for Bill. I’ve always enjoyed talking with Bill here at CA House. He will be missed and I am truly sorry for you loss.

I knew Bill when he worked with my father, Gary West of Valley National Gases. He always had a smile on his face and a joke to share. He will be missed here on earth but heaven will be truly Blessed by his presence.

I was so sad to hear about the passing of Bill. I remember him as a warm, wonderful person with a great sense of humor and smile on his face. I’m sure he will be greatly missed, especially by his family. My thoughts and prayers are with you.

Sorry to hear about your loss. The two of you were there for me a few months ago. My thoughts and prayers are with all of you. Try to be strong for each other. Take Care.

My deepest sympathy goes out to Misty and Myrt. I grew up at the Kennedy house and often felt like Bill was as much of a Dad to me as my own was. He was the “Cool Dad” who built a clubhouse out of an old swing set and heavy-duty plastic. He was never to busy that he couldn’t be talked into a game of kick the can. So many of my memories include Bill and the important lessons he taught all of us West Bellaire little girls. My first time at the ocean was our joint trip with my parents and Myrt, Bill and Misty. When I would take my own family there, we would always take a drive by the Marion Earl and they would have to listen to all my memories of my first trip. My big regret is that I never told Bill what an imporant part of my young life he was. Myrt, if you read this, please know I loved you, Bill and Misty. Heaven will be a better place with Bill Kennedy in it.

My sincere condolences go out to Bill’s family at this difficult time. I have many fond memories of my time working with Bill at Valley.

Myrt, I was so sorry to hear about Bills passing. As you know, he was almost like a brother to me for so many years. I will never forget all the “picking sessions” we had and how much fun we all had together. I don’t have the words to say how much I miss him, but I will always remember all the good times we had. You and Misty are in my heart and prayers.

I’m so sorry to hear about Daddy Bill. He was such a fun-loving man, and no one could tell a joke quite like him. He will be greatly missed.

Prayers and love to your family,

Myrt,Sherry Lynn and family., I just looked at the memorial for Bill and it took me back many years., I grew up around Bill and he was such a wonderful man., Made us laugh alot., You were truly blessed to have him ., Love Anna

Sorry to hear about Bill’s passing.I remember Bill used to come down to my parents Jim &Janet Gooch dry cleaning shop in Bellaire. Bill was always in a cheerful mood, joking and kidding around with me in my younger days. Where did the time go?..

To the family of Bill Kennedy, I am so sorry for your loss, Bill will be missed by all, I had the privledge of working with Bill at Valley Welding Supply Company, had several long trips to Fairmont at least once a month, Bill to me was a great friend, a mentor and a fun loving overall great human being which I am proud to say that I knew and worked with this man.

To the Kennedy Family: Sorry to hear about Bill’s passing. I was out of town that week and am sorry I could not make it to the funeral home. I considered him to be a true gentleman with a great sense of humor. On numerous occasions, he, my father Fred and myself shared many great funny stories that I will cherish forever. He will be dearly missed. Thoughts and prayers are with you.