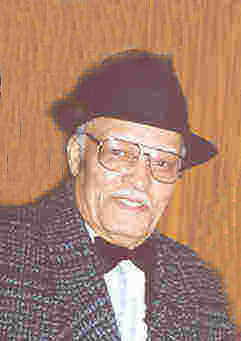 William “Bill” Ellsworth, 91, of Martins Ferry, Ohio, formerly of Bellaire, Ohio, was called home to be with the Lord on Sunday February 17, 2008.

He was retired from the Ormet Corporation, and Construction Workers Union # 809 Steubenville, Ohio.

He was a member of the Pilgrim Rest Baptist Church, Bellaire, and Masonic Lodge # 181 F & AM of Bridgeport, Ohio.

He was preceded in death by his parents and a daughter, Von Zella Ellsworth.

Family will receive friends Tuesday 2-4p.m. & 6-8p.m. at the Bauknecht-Altmeyer Funeral Homes and Crematory 441 37th Street Bellaire, Ohio and on Wednesday from 11a.m. until time of funeral service at 1p.m. with Pastor Robert. B. Ellsworth officiating.

Memorial contributions may be made to the Pilgrim rest Baptist Church.

Condolences may be made to the family at altmeyer.com

Dear Bertie and boys and families:

We are so very sorry to learn about your loss. It is hard to believe he was 91 because he always looked so dapper and well groomed. I will miss seeing the two of you together, as you always were. Please know that our thoughts and heartfelt prayers are with all of you. He was truly a part of Bellaire’s history.

Dearest Aunt Bea & Family, It is with great sorrow & love that I express to you my deepest sympathy. Uncle Bill was one of the best. I pray that you find comfort from your family, our extended family & friends during this most difficult time.

Hi Billy and Diane,, I am so sorry to hear of the passing of your Dad.. The picture of him online is simply Beautiful.. What a great person… I surely do miss seeing you guys and all the Fun we had at wrestling.. .. May our Lord give you extra Love during this trying time.. Please know we are thinking of you and loving you all so much.. Your friend, Candy Wilson and Family

It is with sadness that I read of the passing of Mr. Ellsworth.

Growing up, he was always very encouraging me in all the sports I attempted.

My prayers are with your family.

I know Mr Ellsworth is at peace in Heaven.

Our prayers are with you during this difficult time. May God bless your family. With all our deepest sympathy. Leslie & Stephanie Irvin

Terry & Nita Galberth and Aunt Bea and family. We are truly sorry for your great loss and you are in our thoughts and prayers. May God Bless and Keep you…Susan & Tom Mansfield

There are so many things to say about Uncle Bill he was the most forgiving person you will every meet on Earth. He will be miss here but we will see him again someday in your FATHERS HOUSE. To the family my heart goes out to you but you know he is better than we.

To Nita & Terry Galberth, You and your Aunt Bea are all in our prayers. We are extending our deepest sympathy to you and the family and pray that you continue to get your strength from the Lord who has all power to get your through these trying times. All our love, James & Gerri Fullwood

To the Ellsworth Family,

We are sorry we couldn’t be with you at this time. You have our deepest sympathy.

God has marked each sorrowing day and numbered every secret tear for all his children who suffered here.

TO THE ELLSWORTH FAMILY,

PLEASE ACCEPT MY DEEPEST CONDOLENCES FOR YOUR LOSS. MR. ELLSWORTH WAS A TRUE MAN IN EVERY ASPECT, HE WILL BE DEEPLY MISSED BY ALL WHO HAD THE HONOR OF HIM GRACING THEIR LIVES

To the Ellsworth family, we are so sorry to hear about your loss. We just found out. Mr. Ellsworth will truly be miss. It was a pleasure knowing him. Please be strong, and know that you were blessed having him in your life.

We are so sorry for your loss! I know that your loved one is in an awesome, blessed place…..talking to our Savior. He will always be remembered in our hearts, and please know our prayers and love are with you during this time.