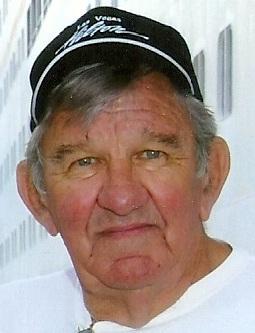 Wayne M. Bramley, 73, passed away in his home on September 10, 2012. Wayne was born in Chesterfield, Illinois on November 4, 1938, to Vera and Horace Bramley. He graduated from Carlinville High School and Tidewater Community College. After graduating from high school he joined the Navy and retired after 20 years of service. After that retirement, he spent 10 years with Northrop Aircraft Corporation and 10 years with the United States Postal Service.
Wayne was a member of VFW Post 392, the Fleet Reserve Association, and the American Legion. He loved animals and supported both the Virginia Beach and Norfolk SPCAs. He will be missed by his canine companions “Bo” and “Miley”. He was a great friend and was always willing to lend a helping hand. He cared deeply for those less fortunate than himself and contributed regularly to the Union Mission, the Food Bank, the Salvation Army and Energy Share.
Wayne loved to fish and hunt, but his real passion was the Washington Redskins. He never missed a game which he enjoyed both attending and watching in his “Redskins Room”. He also enjoyed NASCAR, the Washington Nationals, and daily games of Sudoku and Cryptoquip. He enjoyed life and loved spending time with his family and many friends. He enjoyed traveling, especially trips to Fernandina Beach in Amelia Island, Florida and Las Vegas.
Left to cherish his memory are his loving and caring wife Melinda Mary; his daughters and family, Cindy and Greg Sassin, Andrea Bramley, Shelly Bramley, all of Virginia Beach, Heather Smith of Dauphin, PA, Evelyn Hewitt Ed of Jacksonville, IL, Jeanne Arnett of Chesterfield, IL, Bill Bramley of O’Fallon, IL, Judy Bivin Richard of Nilwood, IL, Ed Bramley of Franklin, IL, Ken McMurray of Ormon Beach, FL, Bruce McMurray Sandra of Fayetteville, NC, Don McMurray Meredith of Sarasota, FL, Nina McMurray, Susan McMurray, Mark McMurray of Pensacola, FL, six wonderful grandchildren and one awesome great grandson. He is also survived by many loving nieces and nephews. He will be dearly missed and will live on in our hearts and memories. He was preceded in death by his grandson Michael Pribesh. He was a loving husband, father, brother and brother-in-law and will be greatly missed by those who had the privilege of knowing him.

In lieu of flowers, memorial donations may be made to the Virginia Beach or Norfolk SPCA. Arrangements are being handled at our Maestas Chapel, 1801 Baltic Avenue, Virginia Beach, VA 23451.

Not a day goes by that your not in our thoughts. You gave us a lifetime of Great memories to hold on to. You will never be forgotten, we will always love you! Mom, Cindy, Andrea, Shelly, Miley and Bo

Our thoughts and prayers are with you and your family through this heartbreaking time. I just wanted you to know I am thinking of you. Our deepest condolences to you and your family. Let us know if you have a favorite charity that we could contribute to in Wayne’s memory.

We are so sorry to learn of Waynes passing. Our hearts and prayers are with you during this time of sorrow.

We will honor your wishes by sending a donation to the Virginai Beach SPCA.

Ingrid wants you to know that she will pray for you until she sees you again. We love you and give your family our most sincere sympathy.

I am sorry for your loss but believe, deeply, that those that have gone before us are not suffering but rejoicing in their release from our worldly suffering. I believe they contiue to be with those they loved and were loved by to watch over and guide. Celebrate all the wonderful moments of his life and know you will be together again

I’m so sorry to hear of Wayne’s passing, especially to Melinda and his daughters. He will be missed. Remember the many good times you shared.

JUST HEARD OF YOUR LOSS. MY HEART IS SADDEN AND HOPE THAT YOU HAVE FOUND COMFORT IN GOD AND THE MANY MEMORIES THAT YOU HAVE. WITH LOVE…bj

Malinda, sorry for you loss. Thoughts and prayers go out to you and your family.

Please accept our sympathy in the loss of your Husband and Father and our cousin Wayne. Wayne and I were classmates as well and will always remember his smile and being so friendly.

We are so sorry for the loss of your wonderful husband.

We will always remember the days at the Santrap and a trip to a pre-season game between the Redskins and the Steelers. It was so much fun with him and Mr. Baarsgaard. May God be with you at this time.

Melinda and family, I am sorry for your loss. Wayne was a nice man and with a good sense of humor and an adventerous spirit. he will be missed.

My sincere condolences to you and your family on the lost of Wayne.

Please accept our most heartfelt sympathies for your loss…our thoughts are with and your family during this difficult time. We were blessed to have had the privilege of knowing Wayne. We will always remember his fun loving, teasing nature and all the fun we had bowling together. With love and rembrance.

Melinda, Andrea, Cindy, & Shelly: Although it’s difficult today to see beyond the sorrow, may looking back in memory help comfort your tomorrows. My deepest condolences to the family and although I did not know Wayne well I will always remember his personality and humor from business trips with Melinda and Wayne. I will keep you in my prayers!

Melinda, Sure is a good picture of Wayne with the obituary…he is one of very few people that when U meet it’s like knowing him for a lifetime..he was “SPECIAL” and I’m proud to call him a friend..God Bless…Spider & Nancy

Pls know that you are all remain in our prayers….take care….Mickie and Tommye

Shelly, I was sorry to hear of about your dad and wanted you to know I’m thinking of you! Take care, Susan O’Connell

Words cannot even begin to express our sorrow, you are in our prayers.