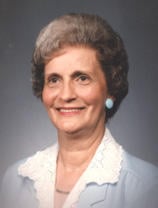 She was born October 10, 1926 in Wheeling, a daughter of the late Fredrick N. and Marie T. Carlier Crosse.

She was a retired supervisor with the Dept. of Human Services, a member of St. Michael Catholic Church, Wheeling, a member of the St. Michael Christian Mothers, Red Hat Society, Evergreen Club and the Woman’s Club of Wheeling.

In addition to her parents, she is preceded in death by her husband, Robert L. Clark in 1993, one son, Paul A. Clark in 1997, two brothers, Fredrick Crosse Jr. and Arthur B. Crosse.

Along with all the members of the Evergreens,of which Wanda belonged, we will miss her pretty smile and always happy manner. My daughters Mica and Linda also enjoyed her presence.

Condolences to Bob and family.

Dave, Sorry to hear about your mother. You have my sympathy. Ralph Kinsey Sears cleaning crew.

Expressing love and support to my sister, Cindy and her Family Dave, Jason and Amber on your loss. Keep sweet memories close to your hearts. Although I’m not there with you, you are in my heart.

Grandma Clark has been such a wonderful, positive, gentle, joyful person. She was a committed Christian and an excellent conversationalist, and above all, a fun lady. I enjoyed her intent conversations about the news of the day, the doting attention she gave to Fritzy Ritz and her enjoyment of all things Red and Purple! Prayers for all.

I am so sorry for your loss. Wanda will truly be missed at the red hatters. I will always remember her laughter, sincerity and soft spoken manner.

I want to tell you how sorry I was when I heard that Wanda had passed. She was one of my favorite clients due to her upbeat manner. It was always a pleasure to work with her. Please accept my sincerest condolences on your family’s loss

I was saddened today when I learned Wanda had passed away. She was a great inspiration to our small collector’s club, Steel Valley 56ers. It was fun to share time with her building a small village for the children at Easter Seals. We also visited her home to see her village display at Christmas. Please accept my sincerest condolences on your family’s loss.

My sincerest sympathies go out to all those who knew this lovely, lovely lady. It has been a great privilege to have known Uncle Bob and Aunt Wanda.

So sorry for your loss. I always enjoyed visiting with her at the retiree’s luncheons. She will be missed.

So sorry to hear of your mother’s passing. I will miss seeing her out in the yard and on the porch when we are in Wheeling visiting. She always invited us over especially at Christmas and was such a good neighbor to my mom and us McGee’s. Such fond memories of riding our bikes to Cournel’s for snacks by the nightly bonfire and many other good times. My sympathies.

We were sorry to hear of Aunt Wanda’s passing. We always enjoyed our visits with her, also enjoyed seeing her Christmas Houses, and other interesting things she would show us.

She will be missed.

You have my true and heartfelt sympathy. Wanda was my true and best friend. I will really miss her. She has been an important part of my life for many years.