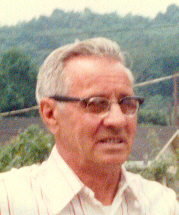 Mr. Miller retired from SH Bell where he worked as a craneman and was a member of the Fredericktown Christian Church. He served with the US Army during WWII. He lived most of his life in East Liverpool and at one time he also lived 16 years in Mississippi.

He is survived by a brother: Ralph P. Miller of East Liverpool, Ohio and his wife Thelma; four sisters: Elizabeth "Betty" Holden of Calcutta, Ohio, Hazel C. Ward and her husband Emmett with whom he resided, Roberta Allen of Calcutta, Ohio and Beulah Holden of Lima, Ohio as well as several nieces and nephews.

Besides his parents he is preceded in by 2 sisters; Esther Simms and Mildred Green-Raley.

Services will be held at the Calcutta Chapel of the Martin MacLean Altmeyer Funeral Home on Tuesday April 13, 2004 at 2:00 PM with Rev Joe Thomas of the church and Rev William Betteridge of the Riverside Presbyterian Church officiating.