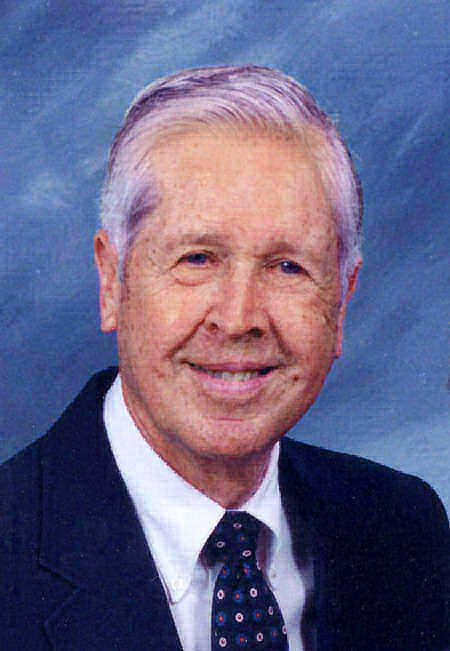 ROBINSON, W.J. “Bill”, 89, of Wheeling, died Thursday, September 13, 2012 at his home.
He was born August 24, 1923 in Clarksburg, WV, a son of the late Robert and Virginia Grace Robinson.
Bill was a graduate of Sistersville High School, Class of 1941.
He married Ruby Margaret Schmidt, New Matamoras, OH, in 1944.
He began his career as an automobile dealer in 1952 in Harrisville, WV when he opened Robinson Motors, a Dodge, Plymouth dealership and then acquired the Chevrolet, Olds and Jeep franchises in 1957.
In 1964 he began his business in Wheeling, opening Robinson-Cadillac-Olds, where he eventually brought in the Toyota line of vehicles.
Bill retired in 1985. During his retirement, he moved to Cape Coral, FL, where he developed W & R Realty, Inc.. He then moved to Mississippi to be near family.
After Hurricane Katrina, he and his wife Ruby returned to Wheeling.
Bill attended Christ Methodist Church in Wheeling, was past president of the Wheeling Area Chamber of Commerce, was very active with Easter Seals, was a former member of the Wheeling Country Club, was named Time Magazine “Dealer of the Year”, was past-president of the WV Automobile and Truck Dealers Assoc., was a two-time Master Cadillac Dealer and served in the Army Air Corp as a pilot with the rank of Captain during WWII, flying 39 missions out of Italy.
In addition to his parents, Bill was preceded in death by a brother, Robert, who died aboard the USS Arizona in Pearl Harbor, and a granddaughter, Amy.
Surviving is his wife and 4 sons; Robert M.AnneRobinson of Wheeling, James G.SarahRobinson of Morgantown, Steve D.TammyRobinson of Wheeling, Richard W.Cheryl of Biloxi, MI, 6 grandchildren; JimAlisonRobinson of Wheeling, RobertaMichaelOlejasz of Wheeling, JenniferMattBischof of Charleston, WV, Caroline Robinson of Washington, DC, Kathryn Robinson of New Wilmington, PA, William Robinson of Wheeling, and 7 great grandchildren; Megan, Evan, Riley, Reagan, Max, Ava, and Madeleine.
Friends will be received on Saturday from 4:00-7:00pm and on Sunday from 1:00pm until time of services at 3:00pm at the Altmeyer Funeral Home, 1400 Eoff St., Wheeling with Rev. John Rickloff officiating.
Burial will be held at the convenience of the family on Monday with full military honors.
In lieu of flowers memorial contributions may be made to Amedisys Hospice or Easter Seals of Wheeling.
Online condolences may be extended to the family at altmeyer.com

Bill, Bob, Steve & Jim, your Father will always be remembered fondly as a kind and caring man. My prayers are with you and your family at the this special time

Sorry to hear about your father.

He was a class guy and a real gentleman. I use to caddy for him and your mother at the Wheeling Country Club and they were always very nice and pleasant.

So sorry for your loss. Your father was a gentleman and will be deeply missed. Your friend and neighbor, Jim

Bill was a good friend and mentor. He will always be remembered. He will never be gone from our hearts.

Bob, so sorry for your loss. Know I am thinking of you!

We were very saddened to hear of your loss, and sorry we are not in Wheeling to pay our respects, but please know you are in our thoughts and prayers.

Please accept our most heartfelt sympathy for the loss of your father.

I haven’t seen your parents since we were all in high school. I remember your Dad and Mom so well, and the patience they had not just for you boys, but all of your crazy friends. I am sorry to hear of his passing and I send my love and prayers to you and your brothers.

Great man. Many wonderful memories both social and business. Our sympathy to Bob & family

I am thankful for the many good times we shared with your Mother & Dad and all of you boys, it was a blessed time for all of us to be in Harrisville together. I can still see Bill and Bob coming from their morning coffee together, the Halloween at the gym when he and Frank were Indians, and fooled everyone what a wonderful time in our lives, how great it was to know him.

I worked for mr robinson, and am proud to have known him. He will be surely missed. My sympathies go out to his family.

Our condolences to entire Robinson family for your loss.

Our family has many many fond memories of Bill but my best personal memory is when he drove me to the church when I got married in Harrisville. Such a sweet man. My sympathy to all the family.

Our thoughts are with the Robinson Family. Roberta is our dear friend and wish her entire family our love during these trying times.

To Bob and Anne and family — grace to you during this sad time.

to: Bob, Steve & Robertasorry for lost, my condolences

WHAT A GREAT GUY BILL WAS. FIRST MET HIM THROUGH THE CHAMBER. HE WILL SURELY BE MISSED. OUR THOUGHTS ARE WITH YOU ALL.