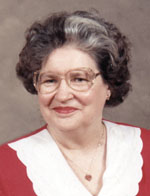 Viola was born July 16, 1921, in Lansing, Ohio, a daughter of the late Stanley and Josephine Darmofal Rozanski. She was a graduate of Belmont High School and a graduate of Elliot’s Business College. She was a member of St. Joseph Cathedral in Wheeling and a member of the former Blessed Trinity Catholic Church in Wheeling. She also belonged to the Thursday Music Club, the Women’s Social Card Club, and was a former secretary of the Pilot Club. Viola enjoyed many things including music, animals, cooking, crocheting, and traveling with her family.

In addition to her parents, she was preceded in death by her husband, Walter C. Byrd, and two sisters, Stella Smith and Helen Rozanski.

Friends will be received Thursday, September 20, 2012 from 4-8 p.m. at the Altmeyer Funeral Home, 1400 Eoff Street, Wheeling, where a vigil service will be held at 7:30 p.m. Mass of Christian Burial will be celebrated on Friday, September 21, 2012 at 10 a.m. at the Mount Calvary Cemetery Bishop’s Chapel, Wheeling, with Msgr. Kevin Quirk as celebrant. Interment will follow at Greenwood Cemetery, Wheeling.

In lieu of flowers, memorial contributions may be made to the Ohio County Animal Shelter, 7011 National Road, Triadelphia, W.Va. 26059.

Please know that you have my deepest sympathy in the passing of your beloved Mother. If only I had known, I would have come to the funeral home or the funeral.

You were a wonderful son until the end. and God will give you the strength to cope with your sorrow.

Greg, Youre in my thoughts and prayers! Let me know if you need anything.

I was saddened to learn of Viola’s death. She and I were classmates at Belmont School. We graduated together in 1939. She would attend Alumni gatherings when she could. My deepest sympathy to her family.

We are so sorry for the loss of your mother. If there is anything that we can do for you, please feel free to let us know. Our prayers are with you during this time.

So sorry for the loss of your mother. I am sure that she is resting in Our Lord’s arms.

Prayers and much love in this time of grief.

So sorry to hear of your Mother’s passing – she was a cool Mom. You all are in my thoughts and prayers while you go through this difficult time. Take care,

John: Just wanted to let you know that I am keeping you in my thoughts and prayers. Your friend from

Please accept our condolences on the passing of your Mother. My Father and your Father both served in the 681 GFA of the 17th. Airborne. I met your Mother once as a small boy and your Dad on a few occasions. I was sorry to hear of his passing. They will both be missed. Respectfully. Frank Leciejewski

Richard: So sorry for your loss.

Sorry to hear of your loss. I remember her well, worked with her for many years with Robert’s Enterprises. I still have the beautiful glass bell she gave my husband & I as a wedding gift. She was always a lady and will be missed. Prayers

We certainly were sorry to learn of Vi’s passing. She was part of the fine Airborne team of Vi and Walt. They were great members of the 17th Airborne Division Association and greatfriends of ours over the years. Vi was a fine woman and will be missed