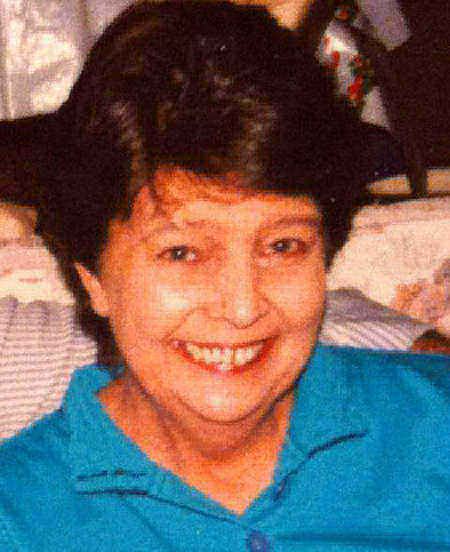 Moffitt, Vickie Lynn Dankmer, 66, of Moundsville, passed away Friday November 15, 2013 at home.
She was born September 8, 1947 in Glen Dale, WV, the daughter of the late Henry Calvin and Roberta Lee Duffy Dankmer.
Vickie was Christian by faith, member of the Moundsville American Legion and a homemaker that loved to spent time with her grandchildren and family.
In addition to her parents, Vickie was preceded in death by her grandparents.
Surviving are her husband of 47 years, Don Moffitt of Moundsville; daughter, Neely Comer of Warwood; two sisters, Kathy Ed Jones and Becky Fahey, both of Moundsville; three grandchildren, Chad, Ricky and Lizzy Comer all of Warwood; two aunts, Marsha Gary Owens and Norma Bokanovich both of Moundsville; uncle, John Duffy of Columbus, OH; mother-in-law, Nellie Moffitt of Moundsville and numerous nieces and nephews.
Friends will be received Monday, November 18 from 2-4pm and 6-8pm at Altmeyer Funeral Home, Lutes & Kirby Vance Chapel, 118 Grant Avenue Moundsville, where funeral services will be held Tuesday, November 19 at 10am with Pastor Ron Wilfong officiating.
Online condolences can be made to the family at altmeyer.com

So sorry about your sister. My thoughts and sympathy are with both of you, and the rest of Vickie’s family and friends.

The family is in my thoughts and prayers in this time of need. It is so sorrowful that Vickie passed on, but there is no more suffering for her and she is in God’s hands being well taken care of.

So very sorry for your loss. You will be in my thoughts and prayers.

Donnie, So sorry to learn of Vickie’s passing. She was a lovely person and I know she will be missed. Unfortunately, Reed and I are out of the country but know you and your family are in our thoughts and prayers. Susie

Donny, Neely, & all Vickie’s family, sincere sympathies on your loss. Vickie was an important part of all the Sampsons’ lives growing up on Robert’s Ridge & will be missed. We are out of town, so unable to attend the viewing but are praying for comfort & peace for all of you.

I am saddened to hear of the passing of a former classmate and friend. Vickie always had a smile to offer. My thoughts and prayers go to her friends and family. Molly Montes Faulk

I am so sorry for your Loss of Vickie…. Mother Sister Wife and Grandmother… You all are in my Prayers for your Heavy Hearts~ Vickie was the Big Sister who tried to keep us girls in line but it was a very hard job… Love you Kathy and Becky many Wonderful Memories at the Dankmer House in the Acres

prayers to you all

Sorry to read about the passing of Vickie, My sympathy to the family, we just have to believe she is at peace now.

Will be praying for you and your family at this difficult time.

You are all in my prayers and thoughts.