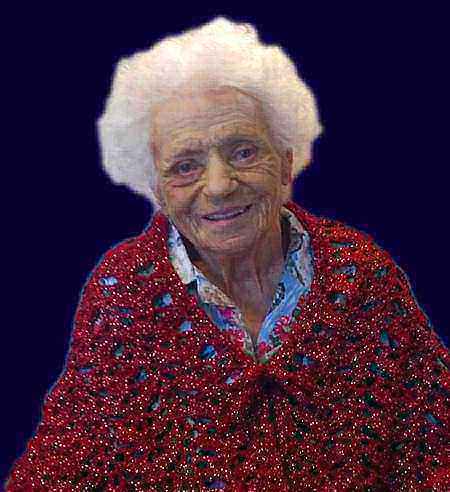 Vera Bacon Roberson, 94, passed away on Tuesday, July 31, 2012. Born in Washington County, TN on February 14, 1918 to the late John E. and Mary A. Bacon, she had been a Newport News resident since 1941.
She was a very active member of Riverside Baptist Church where she was a Sunday school teacher and visitor for the Extension Dept. She was also a member of The Golden Thimble Needlecraft Guild of Hampton. During World War II, she worked at Newport News Shipbuilding in support of war efforts.
Vera was preceded in death by her husband, Edward R. Roberson; three grandsons, Kevin, Lonnie and Ronnie Berland; two brothers, Robert and Galen Bacon; and her sister, Edith Bacon.
Survivors include four daughters, Edna Berland Gary of Smithfield, VA, Patricia Owens of Wilkes County, NC, Sylvia Sanders Jerry of Tallahassee, FL and Kathryn Tripolites. She is also survived by five grandsons, Jeffrey Scott Berland, Bernard J. Thomas III, Diamond Justin Tripolites, and David J. and Jason R. Sanders; four great-grandchildren and one godson. The family would like to give a special thanks to the staff of The Chesapeake and Odyssey Hospice for all their care and support.
The family will receive friends from 12 noon to 1 p.m. Friday, August 3, 2012 at Riverside Baptist Church. A funeral service will follow at 1 p.m. at the church, officiated by Rev. Tommy J. Davidson. Interment will follow in Parklawn Memorial Park.
Altmeyer Funeral Home Riverside Chapel in charge of arrangements. Condolences to the family may be made at altmeyer.com.