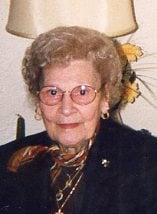 She was born in East Liverpool, OH on May 21, 1915 and was a daughter of the late Joseph and Rose Caputo Marrelli.

Living her entire life in the area, Mrs. Ferello-Brandon was co-owner of Ferello’s Market and worked at Ferello’s Restaurant, She was a member of the 30-30 Club, was a Lady Knight and a member of St. Aloysius Community Parish, where she belonged to the Altar & Rosary Society.

She was preceded in death by her first husband, Victor Ferello in 1971 and her second husband, William Brandon in 2003.

Besides her parents and husbands, two brothers, John Marrelli and Charles Marrelli, preceded her in death.

A Mass of Christian Burial will be celebrated on Thursday, July 30, 2009 at 9:30 AM at St. Aloysius Community Parish with Father Peter Haladej as celebrant.

The family will be present to receive friends at the Calcutta Chapel of the Martin MacLean Altmeyer Funeral Homes on Wednesday, July 29, 2009 from 5:00 to 8:00 PM

Bob I am sorry to hear about your mother. Please accept my deepest sympathy. I am sorry.

We wanted to send our deepest sympathy and love at this time in the passing of your Mother.

It was so nice to meet her that time we attended a picnic at her house. What a sweet lady.

We both have lost parents and know this is a very trying and lonely time and we want you to know you are in our thoughts and prayers.

I am so sorry about your mom, I have fond memories of dinner with her at Mr. & Mrs. Marrelli’s house, she was so spunky and so much style. Thinking of you all in this difficult time.

I am very sorry to learn of the passing of your mother. She was a lovely lady and I know she will be missed by many. Take comfort in the fact that you were able to share her life for so many great years.

I am thinking of you all at this time. I enjoyed doing Theresa at Pepperberry Suites. She was always waiting to get her hair done on Tuesday mornings. She would always stop and talk to others that were in there during the day. Just letting you know I am thinking of you. My sympathy is with you. You are in my prayers. Sincerely, Gina the hairdresser

I know that each of you has been blessed by having such a wonderful person in your life. God has now welcomed her into His kingdom where she will forever be an angel watching over her loved ones. Keep faith and love in your hearts and know that you are in my prayers.

I would like to say to the Ferello family how sorry I am for your lose. Theresa was a wonderful lady and will be greatly missed, she was loved very much and is still loved very much. Im really sorry that I could’nt be there but your family are in my thoughts and prayers.

Jim & Bobby ,May your mother rest for ever , the lord has taken over i know mrs. ferello made the final,s . bless you and your,s as well . as a side note see you in 20010 ? john

My deepest sympathy on the loss of your precious Theresa. Our hearts go out to you and your families.

We all fell so sad ,but glad that we got to see and kiss her one last time. We all are thinking of you, and saying a prayer for her . Love JOe, Rita, Adrian, Liza

With our deepest sympathy and thinking of you. Jim, Monica, Adam, and Alison

With our deepest sympathy, Gayle,Owen,Todd, and Craig