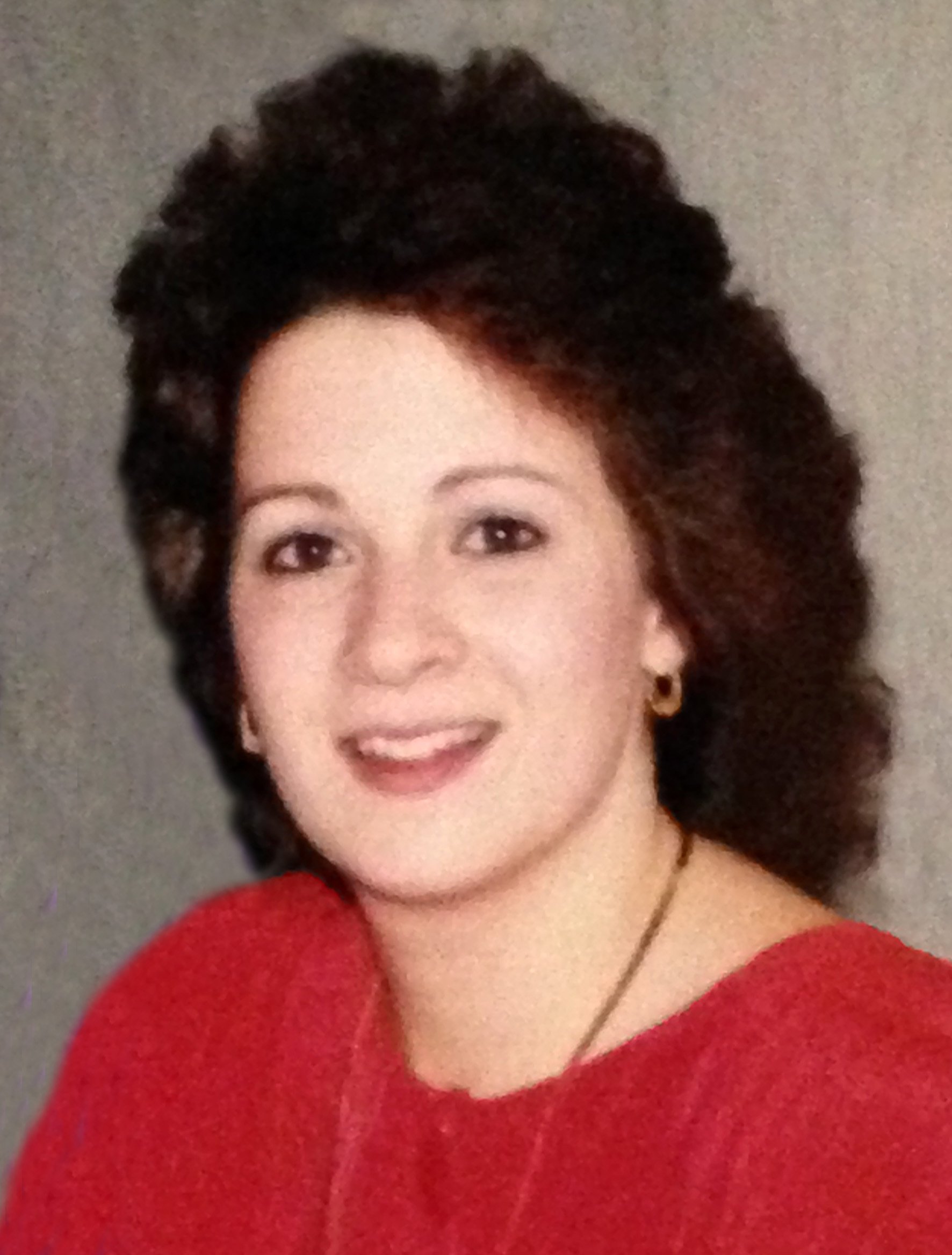 HAMMEL, Theresa Lynn, 50 of Wheeling, died Wednesday, February 12, 2014 at Liza’s Place, Wheeling.
She was born September 28, 1963 in Wheeling, daughter of Frank and Eleanor May Muraca.
Theresa was employed at American Medical Billing and was a member of St. Joseph Cathedral, Wheeling.
Theresa was preceded in death by a brother, Michael Muraca.
Surviving in addition to her parents, is her husband, Steve Hammel, a son, Warren Hammel of Raleigh, NC and a brother, Frank Muraca and his wife Ruth of Dallas Pike, WV.
Friends will be received on Friday, February 14, from 2-4 and 6-8pm at the Altmeyer Funeral Home, 1400 Eoff St., Wheeling, where a vigil service will be conducted at 6:15 pm.
Mass of Christian Burial will be celebrated on Saturday, February 15 at 10:30am in St. Joseph Cathedral with Msgr. Kevin Quirk as celebrant.
Burial will follow in Mt. Calvary Cemetery.
Online condolences may be extended to the family at altmeyer.com

Dear Steve and family, I am so sorry for your loss. In time, all the pain will pass along with the grief and you will be left with cherished memories of your loved one.

I am so saddened to hear about your mother. She was a kind, generous woman. She was so proud of you and all your accomplishments. I remember her fondly and send you and your father my deepest sympathy.

I am so sad to hear about Theresa’s passing. May God Bless and keep her in his loving care for all eternity. My prayers are with her family at this time of loss.

I am so very sorry for your loss. She will be missed by so many

May this poem help you in your healing and know that Theresa is with the Lord.

When the wind blows through your hair, know that she will always be there.

When the sun shines on your face, know that it is her embrace.

As the moon comes out and takes its place, its graceful light shines across your face, when it does then you must know, its her farewell kiss before she must go.

Her very last goodbye, before she becomes an angel in the sky.

She stands before the Lord, her wings shining bright.

She takes the hand of God, and shines with all her might.

Another angel in the sky, another day that has gone by.

Another good woman laid to rest, another guardian Angel that is Gods best.

May Theresa rest in peace, and our love for her never cease.

May we be strong enough to share the love Theresa gave, and every memory of Theresa may we save.

For Theresa is our Angel that God made, forever in our hearts, She will never fade

Theresa, I will hold our special friendship in my heart forever. Until we meet again, may God keep you in his loving hands. Rest in peace my dear friend.

My heart goes out to the entire family: Steve, Warren,Eleanor, Frank and Frank,Jr along with Denise Wycerley. Theresa was such a beautiful person, I always looked up to seeing her when I was growing up. during many Christmas’at Aunt Jenny’s house will always be in my memory.May God embrace all of you with healing arms, I know Theresa is with the many angels above makes that me feel some comfort knowing she is having peace and no pain ,but joy seeing all our lost family. With heavy hearts, and may prayers for all of you, she will be missed my many. Love, Marcy The late Marlene Spoto Bowman’s daughter,Amanda, Cierra and Chaz Huntsman.

My heart goes out to the entire family: Steve, Warren,Eleanor, Frank and Frank,Jr Theresa was such a beautiful person, I always looked up to her during visits with my parents to her house when we were young. She was such a kind girl, who grew into a kind, wonderful, and strong Daughter, Mother, Wife, & Friend to many. I pray for each of you. Know peace that she is definitely in Heaven watching over each of you. God Bless each of you. Rest in Peace Theresa. Deena Duffy-Tarabrin, my brother Jason, and my family Sasha, & Dmitri

She is the kindest, strongest most loving person I know. She loved her family so much. Please if you need anything just let me know

so very sorry for your loss

Theresa was a terrific person and indeed suffered for too long

she is now at peace in Paradise

Steve & Warren So sorry to hear about Theresa. I enjoyed working with her for many years and always enjoyed our talks at lunch break. Please find comfort in knowing that she is now at peace and her earthly pains are now gone. She was a real fighter and for this I truly admired her. God bless!

Steve and family, we are so sorry to hear of Theresa’s passing. You will always be in our hearts and prayers. Please find comfort in knowing she is at peace and will always be with you in your heart and soul.

Steve and Warren, We want to offer our condolences to both of you. We still have vivid memories of the boys playing baseball together and it was a joy whenever you and Theresa were at the games. Andrew sends his condolences as well. I wish I had the words to ease the pain but I don’t. I can say that Theresa was a wonderful human being and I’m a better person because I got to know her. God bless…

Steve and Warren….God must have needed another angel. Theresa was such a warm, caring, and beautiful woman. I remember her smile! You are in my prayers,,, God Bless….such sweet memories can never be taken away.

My prayers are with you and the entire family. Please let me know if you need anything. God Bless!

Steve, so sorry for your loss, Theresa was a special and kind person. My thoughts are with you and Warren. I will also remember Theresa’s smile a wonderful person. Prayers Love, Jerry and Jill Schwing

Steve,so sorry for your loss.If you need anything let me know-Mike

Steve; my deepest sympathy to you and your family for the loss of your loved one. I send my blessings and prayers to all of you,for strength in your time of sorrow.

Theresa is a Beautiful Person who has touched so many people’s lives. A very kind, good hearted lady. Let us keep her in the present she will always be in our hearts. She is sadly missed by her Family, her Friends and many, many who loved her. May she rest in peace now knowing she is in Heaven with no more pain in the Arms of the Lord.

My Thoughts and Prayers for Her Family and Friends. Love, Patty Witzberger

Theresa was a student of mine years ago at CCHS, and I have never forgotten her. She was a beautiful girl and grew into a lovely young woman. I would see her occasionally, and in our brief conversations her focus was always her family. I know how much she loved her husband and son. May you both be at peace, knowing that she will forever be an angel, still watching over you.

Upon hearing that my wonderful friend Theresa Hammel went home to Jesus I became struck with grief. I know that she suffers no more and that Jesus has greeted her and now she is in His heavenly kingdom. She is learning new and amazing things in heaven. If it wasn’t for Theresa I wouldn’t have 4 beautiful children because she told me to give someone a chance. She gave me my first baby shower at her home. We had so much fun and laughter together when we worked at the Diocese. What an Amazing and very Kind Woman – A Woman of Faith. Steve, Warren, Mr. and Mrs. Muraca, you and your family are in my prayers. I love you Theresa, Always, your friend Kim

We were very sorry to hear of the loss of your beloved Theresa. Her family and friends have our condolences.