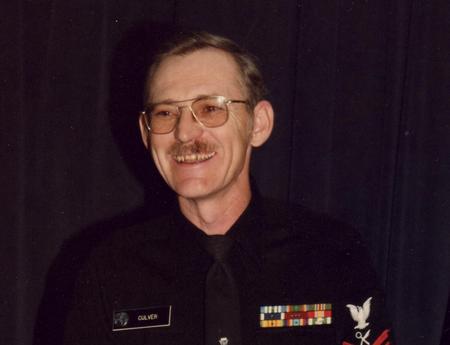 Virginia Beach-Terry Jay Culver, 57, passed away December 17, 2004. He was born in Dodge City, Kansas to Eldon and Wanda Culver, where he went on to join the US Navy in August of 1966 and retired in October 1986. During his service he was a Plank Holder on the Dwight D. Eisenhower and also served in Vietnam. He married Sharon in November 1966. Terry enjoyed fishing, riding motorcycles, and working in the yard. He also cherished spending time with his grandchildren. His career continued at Atlantic Dominion Distributor for 13 years, until his health could not permit. He was also a member of many organizations including the American Legion Post 0368 for the past four years, The Red Nights, Southside and Harley Davidson Motorcycle Organization.

He is preceded in death by a daughter, Jennifer Rena and his father Eldon Culver.

A memorial service will be held at Church Of The Ascension on Tuesday, December 21, at 1:00 p.m. by Father Jim Parke with a Friendship Gathering starting at 12:00 p.m. Please visit this memorial at altmeyer.com

An outstanding PI that surely will be missed by his shipmates.

God be with you during this difficult time.

Hugs & Kisses from your Montana friends,

I think I met Terry sometime ago at SSHD and although I am not sure of it I am still concerned of the loss of one of the HOG members and brothers. God bless all of the family.

I was sad to hear of the passing of a former class mate & neighbor. I had lost track of Terry after our High School years. Sharon, I would appreciate it if you would contact me. You are in my thoughts & prayers. God Bless.

I worked with Terry in the late 70’s when we were both part of the commissioning crew of the USS Eisenhower. He was a great guy to work with and have thought about him every now and then since. I’m sorry to hear he was taken from us; my prayers are with him and his family.

Our thoughts and prayers are with you and your family, Sharon. We will miss Terry greatly, but are condfident that he has entered the Haven of Rest and anchored in that Safe Harbour, his last cruise over and welcomed home on that brighter shore.

Although I could not be with you during this difficult time — you and your family have been in my thoughts. Terry was a special man to our family, I will always remember our times together and the laughs we shared. We all share your sadness today and are here when you need us in the future. Love Always, Monica

We were very sadden to hear of Terrys’ passing. He was a great man, and left me hoping and praying to have a fraction of his courage and strength. Our thoughts and prays are with you.

Andrea and I would like to express our deepest sympathies to your and your family. Terry fought a very courageous battle, and will be missed very much. Please know that our thoughts and prayers are with you and Terry.

My thoughts and prayers will be with you in this time of need. Terry will always be in my heart as the best friend anyone could ever ask for. He will be missed by many. God Bless you.

We are thinking of you, you are in our thoughts and prayers.

Sharon and Family….We are thinking of you and sending our love. Mac & Violet

We knew Terry through very good mutual friends, Randy and Carol Crabill. We were very saddened to hear of Terry’s passing. He was always a pleasure to be around. He will be missed greatly, and remembered fondly. Our best to you and your family in this time of sorrow.

Terry was a nice person, and I enjoyed having the pleasure of working with him. I know he went through some tough times during his illness, but he is no longer in any pain, and he is in a much better place, and one day we will see him again. He will be greatly missed by his Atlantic Dominion Family.

To Sharon & Family, We will miss Terry very much. He was an inspiration to us all with his tenacious attitude and fearless spirit. Our thoughts and prayers are with you in this difficult time. He will always be remembered by us as we go about our days. The Barney Family

to sharon and family,

we are truly sorry for your loss. we loved him very much and will miss him dearly. we will always be here for you for whatever you need.

we love you guys,

To Sharon and family,

I was so sorry to hear about your loss. My thoughts and prayers are with you all.

To Sharon and Family,

Terry was a very kind and caring person and will be greatly missed by all who knew him. We hope all the wonderful memories you have of the fun times you had together will comfort you in this terrible loss.

To the family of Terry Culver and his dear wife Sharon: I want to send my cares and prayers for all at a time like this . It is never easy even when you expect it. So to you all just pray to God and he will see you all on the safe side always. I worked with Terry along time and I sure will miss him.. He is a wonderful man and would do anything for you all you had to do was.ask.. He’s a man I’m sure God is glad to have to help him doing all he done on this earth and thats alot. So Sharon just always remember he will be your angel from heaven because you sure was his while Terry was here.. You take care and I will keep you in my prayers always and if there is anything I can help you with please feel free to call me anytime Shelia with Atlantic Dominion. I know God is watching over you all right now and I’m sure Terry is smiling down on you all too.God will Bless you all and keep you all safe.. Your Friend Shelia….. TERRY YOU REST IN PEACE NOW SURE WILL MISS YOU OLD BUDDY…..

We are sorry for your lose. Love Lester,Phyllis and family