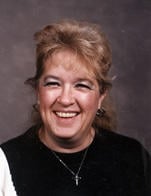 Susan was born September 27, 1938 in Wheeling, the daughter of the late Victor C. and Mary Louise Dobbs Caldwell. She was retired from the Diocese of Wheeling-Charleston; a member of the 4th Street United Methodist Church, Wheeling; the A.A.R.P. and was an avid bowler, dart and pool player.

She is survived by her four daughters, Charleen Hatten and her husband, Robert of Martins Ferry, Ohio, Mary Helen Klassen and her husband, Bret of Andersen Air Force Base, Guam, Suzanne Gist and he husband, Charles of Wheeling and Maggie Vidonic of Wheeling.; a brother, Samuel Caldwell of Moundsville, W.Va.; eight grandchildren and five great-grandchildren. Susan is also survived by her former husband, Charles Vidonic of Bethesda, Ohio.

Friends will be received from 2-4 and 6-8 pm Friday at Altmeyer Funeral Home, 1400 Eoff Street, Wheeling, where funeral services will be held at 10 am, Saturday, July 11, 2009, with the Rev. Robert Johnson officiating. Interment will be in Greenwood Cemetery, Wheeling.

Memorial contributions may be made to a charity of the donor’s choice.

Im so sad that your gone. It will never be the same without you. I wish we would have had more time together. You will always be in my heart. I cant wait to see you again. It breaks my heart to know that you are gone, but im so glad your no longer suffering. I will always be thinking of you. I LOVE YOU MORE THAN WORDS CAN EXPLAIN.

I will miss you so much!I will never forget you or the great times we had together. I love you g ma C.C.goodbye <3

You are truly going to be missed. I know that God has taken you to a better place to be with Gram & Pap that were waiting for you with open arms. Tell them hello & that I love them. It is going to be hard without you, just know that I love you with all my heart & that I will never forget you. I will visit you often and we can still have our talks like we used to especially at Susie’s II, I will miss you, I love you, until we meet again and you can have your arms open ready for me. You are now one of Gods angels.

I will never forget you. You were one of the funniest gals I know. You were a kind, caring person that will never be forgotten. I will miss you greatly. I can’t wait until the day we meet again.

Grandma CC I will miss you dearly, but I know you are with the angels looking down on us. With all my love you will never be forgotten. I will cherish our Germany memories and will always think of you when I look back at that time. You will always be with me, Amy Sue

I knew Suzy way before she married Mike. Im so sorry for yur lose. i just found out about her passing. My Brother just past away, Frank Biery. He will be laid to rest on Mon. Suzy was so much fun to be around with playing pool.

Our deepest sympathy goes out to you during these difficult times. We are thinking of you.

Our thoughts and prayers are with the family. We are sorry that we can’t be there but we are with you.Love to all God Bless.

Our thoughts and prayers go out to the family during this trying time. So sorry for your loss.

Sorry to hear about your mother

Very sorry to hear of Sue Mom’s passing. She was definitely one of a kind and will certainly be missed!