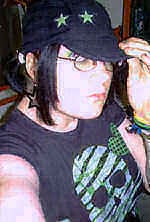 WARNER, Stephanie Renee, 19, of Buckhannon, WV, formerly of Wheeling, WV, died Wednesday, July 15, 2009 as the result of an automobile accident.
She was born February 26, 1990 in Wheeling, the daughter of Eugene and Kim Carr Warner.
Stephanie was an employee of Lowe’s, Buckhannon, and a member of the Valley Grove Assembly of God.
She is preceded in death by her grandfather, Lawrence “Butch” Hall.
Surviving in addition to her parents are two brothers, C.J. and Sean Warner, grandparents, Linda and Michael Marshall of Wheeling; Marylou Warner of Bellaire, OH; several aunts, uncles, cousins, including Aunt Judy Warner of Buckhannon.
Friends received Noon to 2:00 p.m. Sunday, July 19, 2009 at the Altmeyer Funeral Home, 154 Kruger Street, Wheeling, where funeral services will be held at 2:00 p.m. Sunday.
Offer condolences online at altmeyer.com

Words can not express enough for the lose of your daughter. My deepest sympathies, thoughts and prayers go out to you and your family.

Our thoughts and prayers are with you at this most difficult time.

We offer our deepest sympathies to you and your family at this time. Our thoughts and prayers our with you.

beaver and kim, sending our thoughts and prayers to you in time of sorrow if ever you need anything please let us know. We can never heal your pain but we would be glad to help in anyway that we can. Again our condolences are with you.

Your family is in our prayers. No one can possibly know what you are going through unless they have experienced it themselves. Stephanie is in a much better place, she is safe and forever watching down on all of you. If anything is needed please fell free to call.

I am so sorry for your loss.I worked with Stephaniea t Lowes.Her presences is still there.She was a special person who I will miss alot.I was working in the returns last night and I could feel her around me.You are in my thoughts and prayers.

I ENJOYED WORKING WITH STEPHANIE

SHE WAS A NICE FRIENDLY PERSON I WILL MISS HER

I miss u steph so much i love u

I will forever miss you Stephanie. I will never forget the memories we had. You are a gift from God and I love you with all of my heart

i will miss you and all our good times together! RIP

We are so very sorry for your loss.Although we haven’t seen you or the kids in a while,we remember Stephanie fondly.She was such a sweet girl.She will be greatly missed and though we can only imagine how you all must feel our thoughts and prayers are with you.We are here for you,if you need anything at all even just to talk you can call us anytime,304-639-0313,or you can email at steelers86girl76@aol.com Give our condolences to the boys.We will be praying for you.

I know words cannot express what you’re going through or how you feel at this time. I am very sorry for your loss. She was a good girl and will be missed by many. I can’t pretend I know what its like so I won’t even begin to try. We are all here for you. We love you.

kim and beav, sorry for your loss nobody knows how this ache feels until they have experienced it themselves. Just remember she will always be your guardian angel watching over you and the rest of the family may god be with you all in your time of need.

I’m so sorry this has happen to your family. We send our Love and prayers to all of you. May God be with you and your family. Jeanie,Mike,Chris,Joe Mandy,Mikey

I can not pretend to know the pain you are feeling. I am so sorry that this has happened to you. I love you guys. But she is smiling down on you asking you to cry for her.

I just reread what I wrote and I meant that she was asking you not to cry for her. She was a good kid guys. Her heart was as big as any.

kim and beaver, i am sooo sorry for your loss. such a young age, so sad if u need to talk contact me im still at kroger our phone no is in the book. if there is anything i can do please let me know.

Kim and Beaver, I’m so sorry. Words can’t explain how upet I am. I love all you guys like family. Stephanie was a really good person I loved her. She was my best friend growing up. I would really like to come to the showing and funeral. Please contact me back my email address is coryswifey2006@yahoo.com

There are no words to comfort you at a time like this, but my thoughts and prayers are with you and I will always be there for you, all you need to do is call. You are like a sister to me,Kim, and I would like to take away your pain if I could. May Stephanie rest in peace and she will always be with you, in your heart. No one can ever take that away or take away your memories. The video was such a wonderful tribute to Stephanie, she would have been very pleased.

I am so sorry for all of the lose you have suffered in the past few months. If you need me, let me know. I miss and love you all!

Kim, Beav and the Boys,

I am very sorry about Stephanie. She was a wonderful young lady. I love you all!

I am so sorry to hear about your loss…Nothing I can say will help ease your pain right now, just keep all of the wonderful, precious memories in your heart and know she will be watching down on you.. my thoughts and prayers are with you ALL.

Kim, Beaver, and boys my thoughts and prayers are with you all please call if you need anything.

Kim, Beaver, sean , and Cj. You had a great daughter and sister. She will be missed by us all. I know i wont forget the memories stephanie and I shared..But she is now looking down at us smiling.

Kimmi Beaver and Boys. Haven’t seen any of you in a long time but just wanted to say I am so sorry. When we were younger me and Stephanie were close. I’m sorry that we didn’t get to spend much more time together. Miss you all and am very sorry for your loss.

My heart goes out to Stephanie and her family. She was a funny, charasmatic, easygoing person, and I enjoyed being around her. We went to high school together and I looked forward to seeing her every day. It is very unfortunate for this to have happened to such a wonderful girl. Goodbye Stephanie, the world misses you already.

My Love and Prayers to the Family Of Our Loving Stephie I have had the Preveledge of Forming a wonderful Friendship with Stephie thru our Lowes Store. I worked with Steph in the Returns and Shared Many Smile and Tears with her. She Took hold of a special spot in my heart that she will live in forever. The Spirit Lives on for where there is love they live on. Thank you for doing such a Great Job she is and always will be very special.I have been given the gift of Memories of herlaughter and smile and Her Saddness and Tears. You all meant the world to her and The loss of her pappaw was hard Now she sits on his knee all smiles and laughter as she picks flowers and Plays with all the animals. What an Angel and What A Spirit we now have that has the ability of being both with you all and each of us ALL the Time. Close your eyes and Open Your heart FEEL her presence. God Bless You all and Know that MANY Prayers and Love are sent your way. Our Store has suffered a Great Loss. Even When She had had enough of those people coming in and wanting to be a Pain in her Buttocks and Shed Insist It was time for a break before she Broke Bad. Loved her Very Much. I wont let her spirit Go, If there is anything I can do feel free to call or email Wolfpkpaws@Aol.com or 304 472 8056 Walk with God

My prayers go out to the family…She was so young. I remember when she came to visit my daughters, Whittany & Brittany Hillberry..God Bless …

Please know that my deepest thoughts of sorrow are with all of you at this most difficult time. May God comfort each of you as you encounter this difficult loss of a precious child.

She Will Be Missed By All We Love You Stephanie!!!!!

So Sorry for your lose

Stephanie I will never forget our conversations we had in homeroom..you sat right beside me;;you always smiled in there,and that kept me smiling most of the time in Park. Rest in Peace

Stephanie was a nice young lady who was a pleasure to be around. Family will be in prayers, and Stephanie will be missed.

Stephanie was a wonderful person to be around, I am sorry for your loss.

Stephanie you were very full of life and fun to be around, you kept me going at epixtar. You are truly missed and loved. Im glad I got to know you.

To all Stephanie’s family, I am sorry for your loss. I used to go to Wheeling Park High School with her. We used to joke about everything in Mrs. Stone’s English Class. She was one-of-a-kind. She never cared what anyone else thought of her; I always admired her for that.

To the Warner family;

My thoughts and prayers are with you. I was so shocked to hear about Stephanie’s death. I attended middle and high school with her and she was such a joy to have around, she made everyone laugh, and was there to make your day better. I have never or will never forget her, rest in peace Stephanie, we all love you and miss you.

To the Warner family: I have known Stephanie since the 5th grade and we were pretty good friends. She was a great person and loved to laugh and make others laugh. My deepest sympathy goes out to all of you. May god bless you and comfort you at this tragic time. May you rest in peace Steph.

Words I’m sure cannot even describe how you feel right now…our hearts and our prayers are with you…those you love don’t go away they walk beside you everyday…I truly believe in that saying…she will be with you always in spirit and in heart….God bless you…so sorry for your loss.