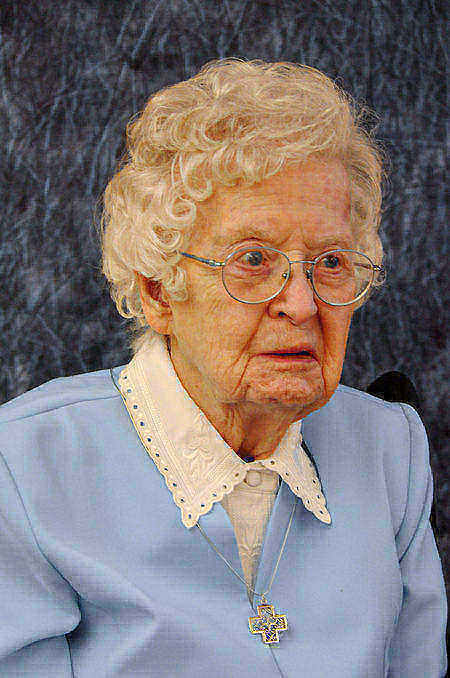 Sister Marjean Martha Regina Staud, daughter of the late Aloysius and Eleanor Grottendieck Staud, died at Mount St. Joseph on Tuesday, October 8, 2013. She was born in Fairmont, West Virginia, on December 7, 1917. She attended St. Peter Elementary and High Schools, graduating in 1935. She earned a Bachelor of Science in Education degree from Duquesne University in Pittsburgh, Pennsylvania, and continued her studies at Seton Hill in Greensburg, Pennsylvania, and Marquette University in Milwaukee, Wisconsin.

Sister Marjean’s service to the people of God was mainly as a teacher and principal in the parochial schools in West Virginia: Sacred Heart, St. Vincent de Paul, and Blessed Trinity in Wheeling; St. Joseph in Huntington; St. Agnes in Charleston; St. Patrick in Weston; St. Mary in Clarksburg; and also in Vacation School work during the summertime in Coalton, Grant Town, Ronceverte, and Clarksburg. Beginning in 1978, her ministries included: pastoral assistant at Blessed Trinity Parish in Wheeling and St. Brendan Parish in Elkins, Coordinator of the Mount St. Joseph Motherhouse community in Wheeling, and pastoral associate at St. Joseph Cathedral Parish in Wheeling. She retired to Mount St. Joseph in 2000, where she was engaged in community service and prayer ministry.

In addition to her parents, she was preceded in death by her brother, Monsignor Sylvester Staud; and her sisters Clara Ann Newhouse, Sr. Martina Staud, Coletta Schmidt, and Mary Eleanor Derr. In addition to the Sisters of St. Joseph, she is survived by her sister, Rita Blazek and her husband Alfred from Cleveland, OH; her brother, Aloysius Bud Staud from Exton, Pennsylvania; multiple nieces, nephews, grand nieces, grand nephews, and cousins.

I worked with Sister Marjean at St. Joseph Cathedral when Father Larry Dorsch was there. She was such a pleasure to work with. I enjoyed her company very much. She helped me through some rough times and I think of her often. She was an inspiration to me and I am sure to many others. I am sure she will be deeply missed.

Sorry to hear about Sister Marjean.

What a wonderful person!

She will be sadly missed, but never forgotten.

Eternal Rest grant to her, O Lord, and let Perpetual Light shine upon her. May she rest in Peace. Amen.