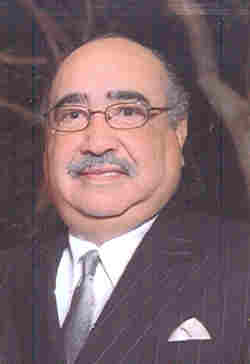 Spotwood was born October 1, 1937 in Bellaire, Ohio a son of the late Ray and Gertrude Thomas Green Sr.

He was a retired 25 year employee of Canalco in Clarington, OH. He was President of Greenlance Burger King , Co-owner of Buffalo Wild Wings and a member of the former St. AME Church Bellaire, Ohio. He was on the Board of Directors at the Salvation Army, Bellaire, and the Belmont Community Hospital in Bellaire.

He was a 1957 graduate of Bellaire High School where he played Football, Basketball and ran track. He played Bass Guitar in his Band “Mixed Emotions” and was an avid Golfer.

Family and friends will be received at the Bauknecht-Altmeyer Funeral Homes and Crematory 441 37th Street Bellaire, Ohio on Friday 6p.m.-8p.m. and Saturday from 2-4p.m. – 6-8p.m. where funeral services will be held at 1p.m. Sunday with Reverend Michael Tolliver officiating.

Interment will be at the convenience of the family.

Uncle Spot will truly, truly be missed. Family gatherings will not be the same without him. We have had some really great and fun times, like going to football games, having the great cookouts at your house and who could ever forget the time we all spent New Years Eve together in 1999 when we all thought the world may come to an end!.

Spot was the “King” in Burger King and definately the “Wind” under the wings of the Buffalo Wild Wings.

Love to you all,

We have such fond memories of bringing my mom and dad to your home and the visits of you and Uncle Spotwood to Virginia. There will be a void in all of our lives. Please know you are in our thoughts and prayers.

So sorry to hear of Spotwoods’ passing. Please accept our deep and sincere sympathy for your loss. Know that he will always be in your hearts & memories. May God Bless you all and our Prayers are with you.

I am sorry to hear of Spotwood passing, he will be missed. I met him my freshman year at Bellaire High. He was one of the first people to welcome me. He was always kind and asked how I was doing. He was a gentleman and a man of character. I’m sorry I didn’t keep in touch after graduation. We will be keeping you in our prayers.

Dear Green Family, We were very sorry to learn of your husband and father’s passing. He was always such a kind gentleman–we admired him so. Know that all of our family’s prayers are with you at this difficult time. We will certainly miss his smiling face.

WORDS CANNOT EXPRESS THE SORROW THAT NICK AND I FEEL IN OUR HEARTS. WE CHOOSE TO REMEMBER ALL OF THE GOOD TIMES WE’VE HAD WITH SPOTWOOD: MEMORIES OF SPENDING TIME TOGETHER AS FRIENDS AS WELL AS WORK PARTNERS, TIMES I PLAYED CHARADES WITH SPOTWOOD trying to remember names of people he couldn’t!!, NICK AND SPOTWOOD BECAME FAST FRIENDS AND GOLFING BUDDIES, SPOTWOOD ALWAYS GOING FOR THE BIG WIN AT THE CLUB CHAMPIONSHIP…WE WILL TRULY, TRULY MISS HIS SMILE AND PRESENCE IN OUR LIVES.

WE ARE HERE FOR YOU, IDA. PLEASE KNOW THAT WE ARE KEEPING YOU AND YOUR FAMILY IN OUR THOUGHTS AND PRAYERS.

I am very sorry to hear of your father’s passing. You and your family are in my thoughts and prayers. Please accept my sincere condolences.

It is with my sincerest condolonces that I extend for the loss of your father and family loved one. He is resting in peace in the glory of The Father, the Son and the Holy Spirit. May Our Dear Lord surround His Loving Arms around you and give you Love and Courage.

DEAR STEPHON AND FAMILY SORRY FOR YOUR LOSS YOUR DAD WAS A GREAT MAN AND WILL BE REMEMBERED BY ALL WHO KNEW HIM. OUR THOUGHTS AND PRAYERS ARE WITH YOU AND YOUR FAMILY. THE TAYLORS

Death cannot separate hearts that knew true love. How fortunate you were to have shared each other’s

I am so sorry to hear about Spotwood. I worked with Spotty at Conalco and was always intertained listening to his stories. God bless him.

I am so very sorry to hear of Spotwood’s passing. My thoughts and prayers are with the family at this difficult time. He will truly be missed.

I was so very sorry to hear of Spotwood’s passing. Your family has my deepest sympathy.

I will truly miss Spotwood. We had alot of laughs together. He was one of the greatest bosses I ever had. Ida, you were the love of his life. He talked about you often. I will forever remember him in my heart. He was so proud of his kids and grandkids. A great man, finally without pain – onto a better place…..Take care. The Green family will be in my prayers.

Spotwood. He was not only a great boss, but a friend that I will truly miss. I have so many memories, pretty funny ones, he was the best! So from the entire

Burger King Family, please know that we loved him and he will be missed.

So sorry to learn of Spotwood’s passing. You are in my prayers.

You are in my thoughts and prayers during this time of loss. May God help ease your pain.

Ida, We were so sorry to hear of Spotwood’s passing. Please know that you are in our thoughts and prayers.

Im sorry for your loss,I car pooled with spotwood,a truely good friend to me and my family.Joe

I am very sorry to hear about the loss of your father. My thoughts and prayers are with all of you.

We are so sorry for your loss. Your family is in our prayers.

Please accept my sincere condolences on the loss of your father. I’ll be thinking of you in your time of loss.

MY DEEPEST SYMPATHY TO THE GREEN FAMILY. IDA AND SPOTWOOD ARE THE MOST WONDERFUL PEOPLE. SPOTWOOD ALWAYS MADE ME LAUGH. HE WAS THE BEST DRESSED MAN IN THIS VALLEY. I WOULD TELL HIM WHEN HE CAME TO WORK AND WORE HIS PINK SHIRT THAT ONLY “REAL MEN” CAN WEAR PINK AND IT MADE HIM LAUGH. I WILL MISS HIM SO MUCH. REST IN PEACE SPOTWOORD. PRAYER TO ALL THE GREEN FAMILY.

My deepest sympathy to your family. I was a coworker at Conalco in the Finishing Dept. and Spotwood was a fine employee and a fantastic golfer.

My heart goes out to the family. My family has known Spotwood for a very long time and I am grateful that he gave me my first job 13 years ago. I am so glad I had an opportunity to meet and work with him. He was a great person and will be deeply missed by many.

Iam so very sorry to hear of the passing of your Father. You and your family are in my prayers.Have Faith and God Bless you all.

So sorry to hear of the passing of your father. I am sure all of you will miss him deeply. Just know that he is in a place far Greater than the one he has left. I am so sorry I will not be able to make it to Bellaire this weekend. Take care and may God Bless You All.

I just wanted to let you know what a fine job you did at the funeral.

You made us laugh and cry in the same 30 seconds. He was so proud of you and all of his grandkids.

And just so you know, if you guy’s are sitting around your grandma’s and you feel that you need that Burger King fix,just call.I’m sure we can hook you up!

Sorry to hear of Spotwood’s passing. We worked together at Conalco for many years.

Sorry to hear of Spotwoods passing. We worked together at the plant for years and enjoyed the many golf outings we had together. May God hold you all in his hands at this time of sorrow.

I was very sorry to hear of Spotwood’s passing. I have fond memories of a times I was able to play golf with you, your father and Nick K. Those were always enjoyable rounds.

Spotwood was a gentleman and a fine person. I have no doubt that he is in Heaven negotiating for strokes.

You all will be in my prayers.

I am sorry to here of the loss of your father. Your family has had a tough nine months. The Ohio Valley has lost a good person. He will be missed by all.

Sorry for your loss.

The employees of Proud Eagle wish to send their condolences to the family and extend to them our sympathy during this trying time.

To the entire Green family, may the God of all grace and peace be with and your family. Even though I have not kept in touch with you, I am remembering all the great times I spent with your family as a girl growing up in Bellaire. I love you Miss Ida and Nakita.

To the entire Green family. I’m so sorry to learn of Spotwood’s passing. You are all in my prayers. He will be missed.