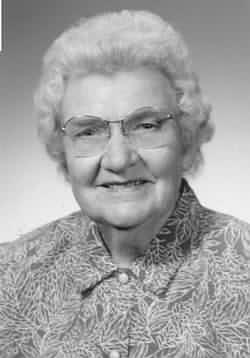 Born in Triadelphia, the daughter of the late John G. Storch and Mary Bott Storch, she attended St. Vincent de Paul School in Elm Grove and graduated from St. Joseph’s Academy in Wheeling in 1934.

On July 1, 1934, she entered the Sisters of Saint Joseph. For 48 years of her religious life, Sister Regina was actively engaged in the ministry of providing food service with the community and in institutions staffed by the Sisters of Saint Joseph, including St. Francis Hospital in Charleston. She maintained St. Joseph’s House of Studies, Washington, D.C., for sisters attending the Catholic University of America.

In 1982 Sister Regina accepted a pastoral ministry position in Kermit, West Virginia, a mission sponsored by the Diocese of Wheeling-Charleston to bring a Catholic presence to that area. Sister Regina’s love of people, her generosity, her ministry and special touch to the sick and shut-ins were dominant characteristics of her life.

Sister Regina later served as Pastoral Associate at St. Theresa’s Parish in Morgantown for 9 years, visiting the sick and shut-ins in the parish and providing respite care for care-givers. She likewise added a special touch to the surroundings at St. Theresa’s with her gift of growing plants and flowers.

In addition to her parents, Sister Regina was preceded in death by two sisters, Sister Mary Lois Storch, a Sister of Saint Joseph, and Cecelia Storch Frohnapfel of Wheeling. She is survived by a sister, Regina Storch Griffith, and brother-in-law, Charles Griffith; nieces Mary Ann Newman of Wheeling and Betsy Masters of North Carolina; nephews John W. Frohnapfel of Lancaster, Ohio, and Jerry Frohnapfel of Wheeling; several grand nieces and nephews. Sister Regina has many friends in Charleston, Kermit, Morgantown, and throughout the Wheeling area.

Memorial contributions may be made to the Sisters of St. Joseph Foundation.