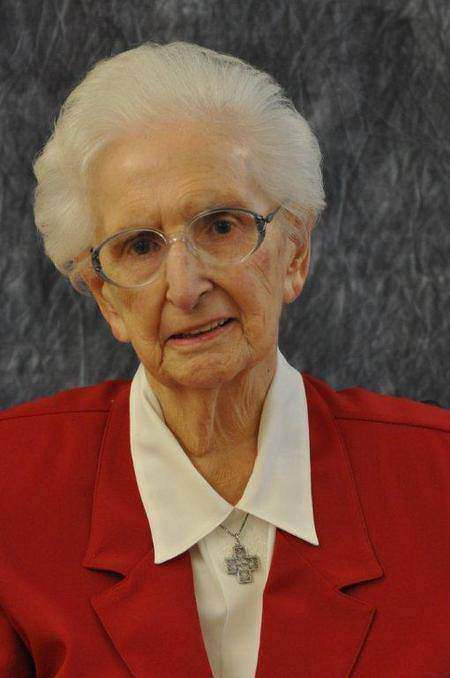 CREMIN, Sister Mary Mary Philip, CSJ, the seventh of eight children of the late Timothy and Hannah O’Neill Cremin, was born in Coolclough, Kanturk, County Cork, Ireland, on September 2, 1924. She completed her elementary education at Dromagh School in County Cork, and her secondary education at St. Brigid’s in Callan, County Kilkenny. She died at Mount St. Joseph, Wheeling, WV, on August 22, 2012 at the age of 87.

Sister Mary earned a Bachelor of Education degree from Duquesne University in Pittsburgh, Pennsylvania. She served as a teacher in parochial schools of the Wheeling-Charleston Diocese for 48 years. She taught at St. Mary’s in Clarksburg; St. John’s in Benwood; St. Peter’s in Fairmont; Blessed Trinity and Corpus Christi in Wheeling; and a total of 21 years at St. Francis Xavier in Moundsville. She also served as Assistant House-mother at St. Vincent’s Home in Wheeling. She retired to Mount St. Joseph in 1996, where she was engaged in community service and prayer ministry.

In addition to her parents, Sister Mary was preceded in death by her brothers Timothy, Patrick, Denis, Philip, and Charles and her sisters Eleanor Cullinane and Nora Lynch. In addition to the Sisters of St. Joseph, she is survived by several nieces, nephews, grand nieces, grand nephews, and cousins.

I wish the best to Sr. Mary’s family and would like them to know what an influence she had on me. She was my fourth grade teacher but she taught me how important a teacher can be. I am a college professor now and all my work with my students is influenced by what she taught me all those years ago.

Loved you, Sr Mary, so much- my teacher and friend @ Corpus Christi Grade school in Warwood, WV. in the 70’s- you were always kind and loved us kids with your whole heart….you turned up years later at my dad’s funeral to be with me and comfort me…i love you so much- you will never be forgotten!

Mary…I will always remember you for your deep faith, your sense of humor , your encouragement and your support. I am honored to call you FRIEND. May the road rise to meet you….may God hold you in the palm of his hand.

Sister Mary Cremin Sister Mary Philip taught me at St. John’s Grade School in Benwood in the late 40’s/early 50’s. The nuns of that time were dedicated to teaching moral and ethical values and behavior, and character building. Sister Mary Phillip was one of these holy and faithful nuns.

Unfortunately, the youth of todays’ Church do not get this kind of teaching which could help them to grow and mature into good Christian behavior.

Sister Mary Philip, you were one of God’s true and faithful servants, who influence the live values of those of us whom you taught. May You Rest in the Peace and Love of Our Good Lord and Saviour.

Sister Mary Cremin was my teacher for 7th and 8th grade at Corpus Christi School in Warwood. This was in the late 60’s and nuns filled the Catholic schools. Of all of my teachers over the years, I would have to say that she was the most caring and loving teacher that I ever had. She was always there for her students in every way. Not only did she teach, she took a personal interest in all of her students. Thank you so much for all of the influence you had over me as well as all of your students. You were a blessing to all of us who had you and you will be missed greatly. May you rest in peace and enjoy your new life in heaven.

Sister Mary Philip was my teacher in the early fifties at St.John’s Benwood. She was not only my wonderful teacher but my friend. We spent many hours working together in the church and school. She will always be in my heart.

What a great teacher she was…lots of good memories of Sr Mary Cremin at St Francis in Moundsville. She will be remembered for her effective teaching, her sense of humor, and her devotion to her faith. We will miss you! Thank you for your years of service!

You are going to be missed for a long time. I met you when my son Matt was in 4th grade and I loved your devotion to both the kids and your faith. You have arrived at your final home and know I will always remember you!