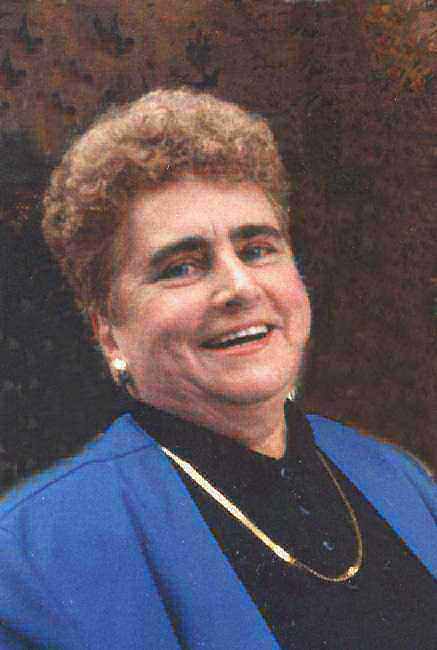 SHEETS, Shirley A. Myers, 73, of Wheeling, W.Va., passed away on Friday, October 7, 2011.
Shirley was born July 19, 1938 in Wheeling. She graduated from Sacred Heart Grade School and St. Joseph’s Academy, Wheeling. She was a member of St. Joseph Cathedral, Wheeling. She was a store associate at Jebbia’s Market and was a former employee of the Capitol City Music Hall. She was an avid football fan of Central Catholic High School and Notre Dame University. Bingo was another ardent pastime of Shirley’s.
Shirley was preceded in death by her husband of 51 years, John Lewis Sheets; and an infant daughter, Donna Lee Sheets.
Shirley is survived by her mother, Anna May Myers; four children, John Lewis, Jr. and his wife, Velma of Nephi, Utah, Julia “Sis” Sheets of Wheeling, Kenneth Sheets and his wife, Kathy of Murfreesboro, Tenn. and Terry Sheets of Wheeling; a sister, Rosemary Myers of Wheeling; two brothers, Richard Myers and his wife, Brenda of Canton, Ohio and Harry Myers, Jr. and his wife, Annette of Wellsburg, W.Va.; a sister-in-law, Donna Menear and her husband, Michael “Mickey” of Sterling, Mass.; a sister-in-law, Helen Pearl Castalow and her husband, Harold “Happy” of Cleveland; three grandchildren, James “Jordy” Janezko, Brent Sheets and Jennifer Marie Sheets; numerous nieces and nephews and great-nieces and nephews.
Shirley was devoted to her family to whom she unselfishly gave her time, energy and unconditional love. Family and friends alike will remember her smile, laughter and zest for life. And now, God has called her to rest in His Eternal Peace.
Friends will be received from 6-8 pm, Wednesday and 2-4 & 6-8 pm, Thursday and Friday at Altmeyer Funeral Home, 1400 Eoff Street, Wheeling, where a vigil service will be held at 7 pm, Friday.
Mass of Christian Burial will be celebrated at 10 am, Saturday, October, 15, 2011 at St. Joseph Cathedral, Wheeling, with the Rev. Charles McGinnis as celebrant. Interment will be in Mount Calvary Cemetery, Wheeling.
The family suggests that memorial contributions be made to either, St. Jude Children’s Research Hospital, 501 St. Jude Place, Memphis, TN 38105 or Wheeling Central Catholic High School, 75 14th Street, Wheeling, WV 26003. Online condolences may be offered to the family at altmeyer.com

A close friend of her sister, Rosemary, for many many years I can

she had a newborn. Ran across her

and now this. She always showed such a pleasant disposition; so likable. I am so sad for her family.

Aunt Shirley smile and joyous laughed will be dearly missed by many in my family until we meet again in Heaven. “See, I am sending an angel ahead of you to guard you along the way and to bring you to the place I have prepared.” Exodus 23:20

I am so very sorry to hear of Shirley’s passing. She was a great person. I have lots of good memories of Her and John both. They were such great people! My prayers are with the family at tough times as this.

I Will miss her smile and our laughs together at Jebbia’s.

I worked with Shirley at Convenient in north wheeling had many laughs and great memories. Thoughts and prayers with the family in your time of sadness.

I’m so sorry to hear of your loss.My children and I knew Shirley from shopping at Jebbias.My 5 year old is crushed!She always wanted to go with me to see the nice lady Shirley!She often brightened our days with her smile and cheer.We will deeply miss her and our prayers are with your family.

So sorry to hear about Shirley. My thoughts and prayers are with all of you.

Julia and family, I am so sorry that I missed the visitation of your mother. I was in Charleston attending a business conference for the City of Wheeling where I work. There are so many memories that I that don’t know where to start. The Knight Stand where she and my mother both worked when my mother was known as Aunt Bee and your mother baked cookies and whatever else to sell at the stand; all the Central games well basically everything. I have such wonderful memories. And then Father McGinnis otherwise known as Chuckles. Just so many memories. Good, wonderful memories. I am so sorry and then your father in February. I lost both my parents in 10 months to the day so I know what you are going through. Take care and God bless.

Kenny, Kathy and family. You look back on memories you forgot you had, And at times you’ll smile even though it hurts so bad. Your mother is a special woman and no one can take her place,You’ll find a piece of mind when you remember her smiling face.

Your mother is an angel now she flies high above the rest,

and in your hearts always and forever she will be the best.

With heartfelt sorrow we send our condolences to the family.

God Bless and Keep you,

My family in West Virginia,

I am so sorry for your loss and you are in our thoughts and prayers. I hope you find peace in your memories of Aunt Shirley.

My mother was a teacher at WPHS for many years, and drove me to and from school. Everyday, after school we always went to Convenient. The highlight of our day was stopping in to see Shirley. My mother always looked forward to running into her at Jebbia’s. She was an absolutely spectacular woman, so sorry to hear of your family’s loss. We’re so happy to have known her, will always have dear memories of her contagous laugh and smile.

My prayers are with all of you.

My prayers are with the family, Your father and I went to grade school together and at times would walk home to East Whg at the same time- Your mom I knew from Jebbia,s-a great couple, memories are forever.

My prayers are with you all through this sad time. I remember many good times with Aunt Shirley and she will be surely missed.

My thoughts are with you all. I’m so sorry for your lose.

Our most sincere condolence to your family at this time. RIP Shirley.

I sure will miss her, Jebbia’s will never be the same

She had a smile for everyone and a wicked sense of humor. She will be missed greatly. My thoughts and prayers are with you!!!

Sheets children so sorry for your loss. My prayers are with you. We all will miss her smiling face.

So sorry for your loss. We will all miss Ms. Shirley’s smiling face.

sorry for your loss sis i will keep you all in my prayers.

I was so sorry to read of the death of your mother. My thoughts and prayers are with you and the family. Jim Pickett

Terry I am so sorry for your loss

If you need anything just call or drop a line. Clay and I are here.

The entire Central Catholic High School family mourns the loss of a great friend and solid supporter. Her memory will continue to live through her descendents and the students at Central. The generous contributions to the school made in her name will be added to the CCHS education fund to support the school for years to come.

To the family of Shirley, Connie and I wish to express our condolences to all of you in Shirley’s passing. A soul who touched the hearts of others will never be forgotten. Shirley was the BRIGHT SPOT at Jebbia’s Market and I am sure a brighter spot in all your lives. Our thoughts and prayers are with you.