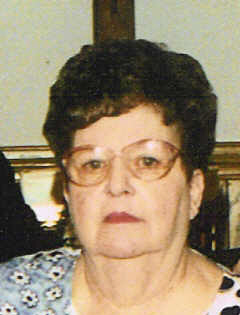 She was the daughter of the late Burl and Cornelia Brinn and was predeceased by her husband, Wade Howard Thomas, Sr. Mrs. Thomas was a member of Gateway Free Will Baptist Church.

Condolences may be shared with the family at altmeyer.com

shelby had a quick wit about her that I loved.

I know that she is enjoying being with Jesus and I know that we’ll see her shortly.

SHELBY WHEN BECKY,RACHEL AND I LEFT VIRGINIA AFTER YOUR FUNERAL,AMY MADE US JAR OF YOUR SPECIAL TEA TOBRING HOME WITH US,YOUR TEA HAS ALWAYS BEEN SO SWEET,BUT YOU WERE THE SUGAR IN IT. WE WILL NEVER FORGET YOUR LOVE. RICHER FOR HAVING KNOWN YOU RICK JACK

Only God and myself know what a difference Shelby made in my life and my family’s life. When we met Shelby in August of 1981 we were not in church any where and of course you all know she asked to go to church with her. It changed our lifes forever. I was so happy to be able to see you all and be with you all for just a few days. We love you and Shelby will always be in our hearts and minds. I will be looking forward to seeing her again one day.

TO THE BROOKS fAMILY,

Joe & I send our deepest sympathy

to all of you,

Shelby meant a great deal to our family and she will be greatly missed by all of those who knew her.

WE WILL ALL MISS SHELBYS SMILE AND LAUGHTER. SHE WAS SUCH A SPECIAL PERSON. WHEN I MARRIED HER NEPHEW, SHE ACCEPTED ME INTO HER FAMILY AS IF I WERE BORN INTO IT. SHE WOULD DO ANYTHING FOR ANYBODY IN NEED. THANK YOU FOR ALL OF THE MEMORIES. THANK YOU GIVING ALL OF US THE GIFT OF YOUR LAUGHTER. TO WADE AND AMY MY DEEPEST SYMPATHY. TO SHELBY WE WILL MEET AGAIN AND LAUGH AS WE WALK THE STREETS OF GOLD.

Wish to extend sincere sympathy to Wade, Amy, daughter-in-law Karen and all the family