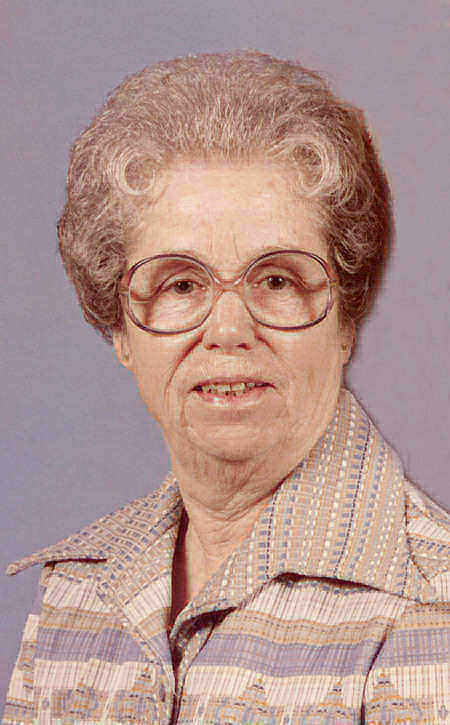 She was born August 8th 1918 in Bellaire Ohio daughter of the late William E. Sr. and Bertollie Woods Banig.

She was a homemaker and a member of the First United Methodist Church in Bellaire Ohio.
In addition to her parents she was preceded in death by her husband Glen A. Carrick Sr. on April 6, 1998 and six brothers and three sisters.

Family and friends will be received at the Bauknecht-Altmeyer Funeral Homes & Crematory 441 37th Street Bellaire, Ohio on Monday from 2 to 4 and 6 to 8 pm where services will be held on Tuesday at 11 am with Rev. Sheryl Seitz officiating.

Share your thoughts and memories with Ruth’s family at altmeyer.com.

Dear Corky and Kitty Lou, Please accept my sincere condolences on the passing of your Mother. I was on Ancestry.com when I found out of her passing. Aunt Ruth was always one of my favorite Aunts. I remember many fun and great times while staying with your family. You can also contact me @ 707 445-8561.

Please accept my condolences on the loss of your mother. She was always so kind and thoughtful to my mother. She would watch to see if my mother’s blinds were open or not and, if not, go check on her. She — and your dad — were wonderful people in my book. I’ll never forget them.

To Glen and Kitty, I was reading the paper on line saw the notice of your mothers’ passing. I remember how nice and kind she always was to me when my mom and dad lived at the other end of Franklin St. My parents moved from Franklin St. down to Shadyside and we lost contact. But I have never forgotten how kind she was. I will keep her in my prayers.