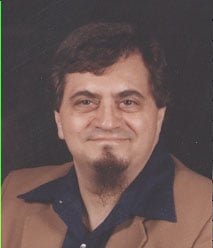 Ross was associated with the Small Scale Chemistry Project at Colorado State University, Ft. Collins, Colorado, including research and procedural development of environmentally friendly laboratory procedures for grade school, high school and college curriculums. His particular interest was in detecting lead in ground, water and soil. He presented his research findings at many conferences in the United States and Europe.

Ross owned Rossi’s Bakery and Deli, specializing in Italian and French foods and wines. He enjoyed traveling, especially in Italy and France. He was a member of St. Josephs Catholic Church, the Knights of Columbus, Kiwanis Club, American Chemistry Society and the International Confederation of Thermal Analysts. He was a Fellow of the American Institute of Chemists.

In addition to his parents, Ross was preceded in death by his beloved grandmother, Grace Brunette.

Mass of Christian Burial will be celebrated at 10 am, Monday, February 18, 2008 at St. Joseph Cathedral, Wheeling, with the Rev. Thomas Schiffer and the Very Rev. Kevin Quirk as celebrants. Interment will be in Mount Calvary Cemetery, Wheeling.

The family suggests that memorial contributions be made to a charity of the donor’s choice.

My thoughts and prayers are with you at this difficult time. Ross was an exceptional man and had an good soul. It gives me comfort to know he’s now among the angels looking after us. Be strong, and know that he’s always with you.

Alice Ann – On Wednesday evening Sally was making spaghetti and she said to Patti, “Mom, do you remember when we were at Spaghetti Warehouse and Ross taught me how to use my spoon to eat my spaghetti?” and Patti said, “Yes, and we were at a wedding once and Ross dropped a strawberry into my glass of champagne and I asked him ‘does that make the champagne better?’ and he said ‘not really but it does a hell of a lot for the strawberry’.” So many GREAT memories! We love you all and we trust you will be at peace in Christ. Please be safe. We look forward to seeing ya’ll soon and sharing even more.

Just to let you know that your family is in my prayers. I have always admire the way you and Ross enjoyed your lives to the very end. The times we had the pleasure to join you’ll in get togethers and talking to Ross about life experiences and have learn something’s to take into our relationship. I know that

even though he is no longer in body his spirit will always be with us and especially with you and the girls. If there is anything I can do or help please let me know..

Our thoughts and prayers are with you and your family during this time of loss.

Our sincere condolances to you, the family, friends and colleagues.

Please know that you are in our prayers.

May he eternally rest in the loving care of The Father.

You and Ross were one of the best suited couples ever, and wonderful parents.

I can see Ross now, holding court,stroking his goatee issuing words of wisdom such as “Life isn’t fair, that’s why there’s a heaven”.

I am so sorry for your loss. Please know that I will keep you in my thoughts and prayers.

Know that the thoughts & prayers of all the George family are with you at this time. Ross has left me with many memories and learning experiences. I still measure trips by how many cigars it takes to get there I just dont smoke them any more. I wonder if Ross & my dad are trying to set up a bakery & deli in heaven now. I look forward to seeing you all soon. All our love.

Rick, Donna & all the George family

ALICE, MY THOUGHTS ARE WITH YOU IN THIS TIME OF GRIEVING. YOU ARE FORTUNATE TO HAVE A FAMILY TO GIVE SUPPORT AND HELP HEAL THE WOUNDS.

We will certainly miss Ross, but we know that he is in such a wonderful place now. Mike and I are so glad we got to spend so much time with you both. You are an inspiration and we will be praying for you always. Love you lots, Mike and Liz

Jessie called me this evening while Marlene and I were driving to our home in Naples, FL. You have our condolences for your loss of Ross. I am sorry we shall be unable to be with you while you are in the Ohio Valley. I copied and pasted Ross’ Obit and sent it to our classmates.

All of us here at Colorado State University were so fortunate to have Ross join us with our Small-Scale Chemistry projects. Ross and Alice, too brought a lot of joy, wisdom and expertise to our work. Like all good teachers, he was a true Renaissance man, with a lively intellect, zestful curiousity, and great story-telling ability. He will be missed! Our thoughts are with you, Barry

Battling Cancer for several years my little friend Ross Marano died on Feb 13 , 2008. He left a huge void in my circle of friends. I will miss my fiend for many years to come. His family and friends lost a great man.

Chuck & Patricia: Sorry to here of your loss so late. I was really upset that I did not know about Ross’s passing. My heart is with you both. Ross is at peace now with the LORD and he will carry Ross in his arms to the gates of heaven. The LORD has given you a wonderful brother, he will live through your memories of him. I love you all so much. Love Ellie & Bruce Teachout

We were so sorry to hear of your loss….what a wonderful husband and father Ross must have been. You are so blessed to have such beautiful memories. Please accept our deepest sympathy.

We are blessed for having known Ross. I will always carry happy memories our time together. I know that you all loved him dearly and will always miss him.

My prayers are with you in your time of loss. May God continue to bless your family and give you strength and grace. May your faith remain strong and propel you beyond the pain of today.

The love Ross felt for you was evident to us all. You filled him to overflowing with your kindness and beauty and he shared that everyone. He will be missed.

You are loved. I regret not being able to be there for you during this time. I offer you my sympathy.

I did not know Ross–I knew his parents from Our Lady of Peace Parish–To let you know many thoughts and prayers are with you and yours–take care-keep the faith and May God Bless you with His Peace and Love–“When someone you love becomes a memory–that memory becomes a treasure”–Sincerely, Sylvia McNeil

I just saw the obit in the Waco paper, I am saddened for your loss. I believe that Ross’ life is truly one to be celebrated as he prepares a feast and readies for our arrival at the perfect time.

Ross was such an interesting, brilliant man with such a rare zeal for life. He loved and enjoyed people, parties, good food and conversation. I was always amazed that he could tell you the particular yeast strain and chemical interaction of how a particular vintage could interact with your tastebuds so well. I believe I shall never meet another man like him. he made me think and he made me laugh.

I got to be close friends with Margo and Cherre from school. Marano’s house was always the hands-down favorite place to gather where we always felt welcome, loved, and of course had the best food. They never complained about the music, whether it was the late night singing and guitars or the stereo. At a young age when our parents were seen as something to be avoided, Ross and Alice were part of their girls’ lives. Rossi might steal the attention of his daughters’ male friends for most of the evening. Margo never seemed to mind. At first I didn’t understand this, until I realized how much she loved and respected him.

I remember so many of his fun stories – one about a silly sticker he put on their old car, from a bogus radio comedy sponsor I think their car was a Packard, and Alice got a speeding ticket with their car model written up by the policeman as a “Crudley V-9”.

Ross was a keen student of the universe, and he always had some interesting and entertaining information on everything from Shakespeare to quantum physics, Tchaikovsky to Fats Domino, and crepes to bratwurst. The Marano family always attracted some of the most interesting people in Waco.

Ross and Alice, having already figured out the simple, most basic strivings for such things as enjoying daily life and loving people, found time to focus on the higher pursuits in life, and taught me that these things were both one and the same.

I will miss you Rossi, I miss you Alice, Margo and Cherre, and I love you all. You are in my thoughts and prayers. May your family receive all of God’s blessings that you have generously bestowed upon so many others.

I met Margo back in our high school days and though her met her dad, Ross. He was a wonderful man. He treated me with great respect and at the same time treated me like family. A man like Mr. Marano is very rare indeed. I’m very blessed to have met him.

Margo, to you and you family, my condolences. I am here if you need anything my friend.

I will always remember the “Sanger Avenue Social Club” and especially the opening of the newly arrived noveau wines. Thanks for the great food and companionship, Rossi. It was always a pleasure to break bread with you.

So Sorry to get the news. My paryers go out to you your family.

I offer up my paryers for Ross.

I just got back this am and received your email.

May Christ be with you and Ross

Sorry to hear of your loss , love and prayers to you Madelyn

To the Marano Family. You were all a part of my growing up, and dear to my heart. Ross will be missed. He was the kind of person you can’t help but love. You will all be in my prayers.

What can be said about Ross? To all who knew and loved him, he was a true friend who would always lend an ear, a hand or shoulder without judgment.

Also he was an excellent chef who was as creative in his kitchen as he was at calming the fears and anxieties of those who needed his advice. We will all miss this man who gave so much to so many.