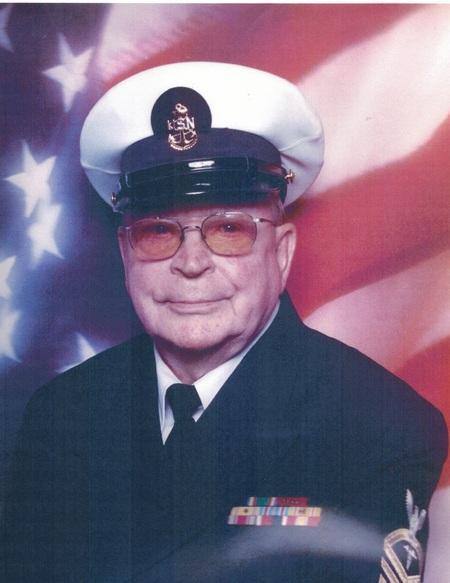 NORFOLK- CPO Robert R. Brunner USN Ret. also known as “DOC” passed away peacefully on November 7, 2013. He was born in Hamburg Germany on March 18, 1922. He is the son of the late Robert T. and Margaret Brunner. Besides his parents he is predeceased by his loving wife Rose M. Brunner; sister, Margaret Toth and his first wife Marion L. Brunner. He was a catholic by faith.

Our dad retired as a Chief Hospital Corpsman from the US Navy after 20 years of Service in 1960. After enlisting at the age of 17, he received training as a hospital corpsman and was assigned to the Mobile Hospital #2 at Pearl Harbor 2 weeks before it was attacked on December 7, 1941. “Doc” was proud to have been a member of the medical team efforts that treated the injured, wounded and burned at Pearl Harbor. He spent the war years in the Pacifica Theater. During his military career, he served on the USS Tuscaloosa, USS LSMR 515 and 516, USS Beetegeuse, and the USS Boston. He also served at the Boone Clinic Little Creek.

Our father retired from the City of Norfolk with 21 years of dedicated service and had worked as a School Custodian at James Madison Elementary School, a Medical Corpsman at St. Brides Prison Farm and a Senior Storekeeper at Lake Taylor City Hospital. He was a life member of the VFW Post 4809 and held the following offices: Post Quartermaster 1985-1989, Post Commander 1965-1966 and 1981-1982, and served as District Commander. He was also a Member of the Military Order of the Cooties.

Under his leadership, VFW Post 4809 was one of the first civic organizations which recognized the outstanding Norfolk Policeman of the year. This award was subsequently increased to include the outstanding Fireman and Teachers. He was a member of the Pearl Harbor Survivors Association Chapter 2 and contributed to the Pearl Harbor Memorial Park at Little Creek. He would march in the St. Patrick’s Day and Veterans Day parade until he could no longer walk the route.

During his retirement years, Dad became a precinct voting captain of the City of Norfolk. Up until the end, he felt it was his civic duty to cast his vote in National, State and Local Elections. He had been a member of the Fairlawn Civic League where he collected dues, passed out literature, and walked his neighborhood to on alert for crime and suspicious person.
Dad had pleasure gardening, rooting for the NY Yankees and the Dallas Cowboys ever since they drafted Roger Staubach as quarterback and watching PGA tournaments.
The family sincerely appreciated all the care that was given to our father by the staff of Leigh Hall Assisted Living Facility and Interim Hospice Care. Also special thanks to Christina Holloway for the care she provided and to Roxanna Davis for her faithful visits over the years.

A funeral service will be held Monday at 11am at Altmeyer Funeral Home, 5792 Greenwich Road. The family will receive friends at the funeral home on Sunday from 6 to 8pm. Burial will be held at Colonial Grove Memorial Park with Full Military Honors. Memorial contributions may be made to the VFW Post 4809 in honor of our father. Online condolences may be offered at altmeyer.com

“DOC” you are missed already ! I know your with Rose and the two of you have a lot of catching up to do . Thank you for all your devotion and support of our Post home. You spirit will remain alive.

To your Family , God be with you through these difficult days . Know that your Dad is at peace. Sincerely, Gloria K.

“DOC” you will be missed but be remembered forever.

Bob and Mike, your Dad sounds like he was a wonderful man and I know he will be missed. Thoughts and prayers are with you and your entire family as your mourn his loss.

Bob Jr.Debbie & entire family. Our deepest sympathies on the loss of your beloved father. Chief Brunner distinguished himself in the service of his country. Wishing him “fair winds and following seas” as he returns home to be with Our Lord.

-Our thoughts and prayers are with you.

Love you and miss you already. Thank you for all you did for us.

We are so very sorry about the loss of your beloved

father and grandfather, we send our sincere condolence and prayers.

Thoughts and Prayers are with you .Praying for friends to comfort you . Faith to uphold you . and Loving memories to carry you though . Love Always , John,Michelle, & John-Jon

Doc will be missed. He was a friend and fellow Vet. He gave me his wisdon about the VFW, it was an honor to have him as my Installing Officer when I was elected Commander 4809 for the year 2009-2010. May the family have peace.

Grand dad, if ever in this life i should miss someone it is you.Your words of wisdom, sense of humor and even your no nonsense approach to certain things in life.I was five years old when i first met you and grandma, and you have help me grow through the years.I appreciate all that you have done for me, you will be forever in my heart.I wouldnt trade the time spent with you for anything,I love you grand dad iam gonna miss you!!!

I met “Uncle Doc” when I was 2 years old ~ he was our neighbor and became a friend and surrogate “uncle” to me and my brother. Every time I saw him he would love to remind me that he knew me since I was “this high” He lived a long and wonderful life surrounded by friends and family. He will be missed

Sorry to hear about the passing of your father. Our sincere condolences to you and your family.

My deepest sympathies to Doc’s family. May the Lord be with you at this sad time.

My sincerest sympathy goes out to all of Doc’s family and friends. While I did not have the pleasure of knowing him personally, I did share the feeling of pride that his granddaughter, Jennifer Simon, exhibited for him. He was a hero to our nation and served his fellow man in ways that are honorable and appreciated by many.

Sorry for your loss… Doc was a great neighbor,always had a beer for me

Such a beautiful tribute to a man who gave so much to our country and community. I did not know your father, but I admire his daughter,

Judy and the path she has also chosen for her life. Her Dad I know will be greatly missed.

Uncle Bob always had a way of making people feel welcome. From the time he “scooped up” my brand new daughter in September, 1966 until our last visit in 1999 I knew that family was very important to him. I was proud to be his niece.

What a glorious tribute to a real hero to our nation and community! My sincerest sympathy to his family especially Bob and Mike whom I had the pleasure to work beside for many years. Peace be with you all.