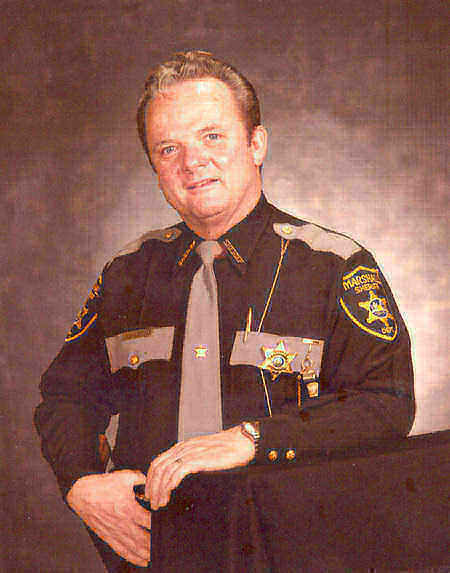 Lightner, Robert L, 79, of Moundsville, WV, died Thursday, September 27, 2012 in Liza’s Place, Wheeling, WV.
He was born September 2, 1933 in Moundsville, a son of the late Bernard and Hulda Maple Lightner.
Mr. Lightner was the retired Sheriff of Marshall County, the first and only sheriff to serve 16 years. He had served as the President of the WV Sheriff’s Association, a Marshall County Magistrate, a Moundsville City Councilman, and a member of the WV State Democrat Executive Committee.
He was a veteran of the U.S. Air Force, serving form 1951-1955 during the Korean Conflict, and member of the 3345th Medical Squadron.
Bob was a lifetime member of the National Sheriff’s Association, the American Legion, the Marshall County PTA and the Cameron VFD; a member of the Eagles Club #449, Ironworker’s Local 549 of Wheeling, and the Moundsville Senior’s Satellite, serving as past president and board member.
Sheriff Lightner received his professional training at the National Sheriff’s Institute, the FBI Academy, the Traffic Institute, the Academy of Judicial Education and Advanced Jail Management.
Bob was the owner/operator of Lightner’s Farm Market and Lightner’s Septic Service, and a member of Temple Baptist Church, Moundsville.
In addition to his parents, he was preceded in death by a brother, Ronald Lightner; a sister, Coleen Richmond Lightner; a step-sister, Nellie Lilley.
Surviving are his wife, Linda Pettit Lightner; three children, Kim Lightner of Moundsville, Carolyn Dan Freeland of New Matamoras, OH and Robert H. Lightner of Moundsville; two step-children, Shawn Stout and Jay Stout; a granddaughter, whom he raised, Danielle Stout; two sisters, Patty Ralph Kelch of Moundsville and Dixie Frieling of Lansing, MI; eight grandchildren; seven great-grandchildren; two great-great-grandchildren; several nieces and nephews.
Friends will be received from 6-8 pm Saturday and 12-4 and 6-8 pm Sunday at the Altmeyer Funeral Home, Lutes & Kirby-Vance Chapel, 118 Grant Avenue, Moundsville, where services will be held at 11:00 am Monday, October 1, 2012 with Pastor Jim Higginson officiating.
Interment in Mt. Rose Cemetery, Moundsville.
The Marshall County Sheriff’s Department will conduct services on Sunday and military graveside honors will be presented by the Moundsville Honor Guard.
Memorial contributions may be made to the Marshall County Animal Shelter or Valley Hospice.
Online condolences may be expressed at altmeyer.com.

Bob was a good friend and an excellent sheriff. He made a positive difference in a lot of lives. He will always be remembered. He will never be gone from our hearts.

Bob was a wonderful neighbor and a fine public servant. I will miss seeing him working around his yard and I offer heartfelt condolences to his loving family.

Bobby, sorry for your loss. Thoughts and prayers are with you and your family.

Dear Kim and family my thoughts are with you

Dear Kim, Carolyn, and Robert: Please know you are all in my thoughts and prayers during this difficult time. Embracing your many memories will hopefully easen your heavy burden. Your dad fulfilled the mission of being one of the best Sheriff’s in Marshall County, and left a legacy, which I am sure you are all proud. God bless all of you. Love you guys, Lisa and Joe and the McDowell Family.

For so many years, I heard so many good things about ‘Sheriff Lightner’, on the news; and, I am truly glad that I finally got to meet him on the day before his passing. May he have a wonderful new mission in Heaven, and may God’s peace and blessings be with you, during this tender season and always.

I am so sorry to hear the loss of your father, please know you all are in my thoughts & prayers and may God Bless you in the days to come.

I just now read the listing for Bob and was very sorry to hear of your loss. I have known Bob for over 50 years and I can say he was the most understanding and caring person. My prayers are with you and your family.

I WORKED WITH SHERIFF LIGHTNER FOR MORE THAN 10 YEARS AND HAD A LOT OF RESPECT FOR HIM. GOOD LUCK TO THE FAMILY

I’m so sorry to hear of Bob’s passing but fortunately he is in a much better place. Linda, I will always be grateful for all that you and Bob did for me during my time in your home. My thoughts and prayers are with you and the rest of the family.

I’m very sorry for your loss. He was a wonderful man.

Im sorry for your loss.I know that he is in a better place because just like him protecting your town,god now has some one protecting heaven.God Bless you and I know he will want you to be strong and think of only the good times.

Our prayers are with you in your time of sorrow. Ecclesiastes 3

Love to you all

Thoughts and prayers are being sent to the family in this time of need. He will be sadly missed by all.

LINDA, MY THOUGHTS AND PRAYERS ARE WITH YOU AT THIS TIME. I WILL KEEP YOU IN MY PRAYERS

Linda, So sorry for your loss, Bob was a wonderful person. He will be missed at the senior satellite.

Maggie and I send our deepest sympathy to Linda and to Bob’s entire family. May God give you all peace and strength through these difficult times.

My sincere condolences and prayers to the family and friends of Robert L. Lightner. May your faith give you strength, your memories give you comfort. May GOD’S love give you peace. Thank you for your service to our country. “A True American Hero”. God Bless †

Our thoughts are with you. Sheriff Lightner was a wonderful man. He will be missed.

Sherrif Ligntner was the best sherrif we could have had….a real honest and caring man.

So sad and sorry to hear of Bob’s passing,my late father,Mike,thought alot of Bob,and knew him from the Democrat committee,a few years ago I ran into Bob on the street and he told me was a great guy my dad was,which I greatly appreciated,he was a big part of Marshall County,and my deepest sympathy to his family and may he rest in eternal peace.

Sorry to hear of the loss of your Pap. He was a great man and very nice. I will pray for you and your family through this difficult time. I will always be here if you need me.

I am very sorry for your loss. My thoughts and prayers are with all of you. There’s never really the rights words to say at a time like this so I at least try to share a nice memory. That said …

I will remember Sheriff Lightner most for his dedication to Marshall County youth sports. A favorite story of mine is that in my lifetime I have only ridden in a police car with its lights on ONE time thank God!and it wasn’t for a bad thing, and here is how it came about: In junior high, I was a ball boy for John Marshall football. Before games I would meet up at JM at the locker room and ride the buses down to the field with the team. One game, I had to help change out spikes on ALL the shoes to larger ones because of the weather, completely distracting me from my typical single and only pregame responsibility of getting two brand new game balls –only to realize that fact, of course, about 5 minutes prior to kickoff. Sheriff Lightner said “come with me!” I thought “oh no, I’m arrested for this!” Suffice to say, with lights ablaze and siren screaming, we made it to the JM equipment locker and back with two brand new game balls, and didn’t delay the game one bit. I’ll never forget that ride.

To the Lightner family,

Very sorry about Mr. Lightner. My thoughts and sympathy are with all of you. You can be proud of the devotion and contributions he gave to Moundsville and Marshall County over his lifetime. Making both better places than when he got here.

To the Lightner family,

Bob, was a special man and he will be greatly missed. Our deepest sympathy to each of you. Your family’s in our thoughts and prayers. May the Lord’s loving arms bring you comfort and peace.

To the Lightner Family,so sorry to hear of Bobby’s passing.I had the honor of meeting & talking to Bob,at a Democrat Picnic.My mother-in-law,Marie Rindfuss,introduced us.She really like him!I also had the pleasure of having a few conversations with him in the years that followed. May God Watch Over All Of You.God Bless!

To the Lightner Family: I am so sorry of the passing of Bob. He was a fine man & awesome Sheriff. My deepest condolences and prayers out to all. May he R.I.P. Love to all, Melissa & Zoey

We are so sorry for your loss and will be keeping all of you in our thoughts and prayers.