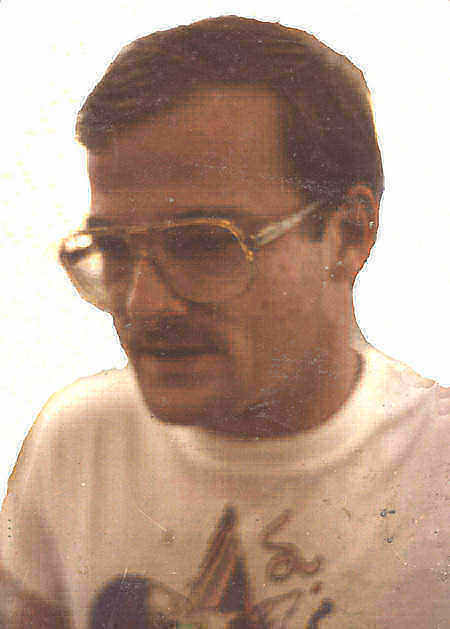 He was born July 12, 1961 in Martins Ferry, Ohio a son of the late Charles and Frances Mills Hill.

He was a member of the St. John Catholic Church, Bellaire Ohio. He retired from Imac Security System.

In addition to his parents, he was preceded in death by his nephew, Michael Braden, Aunt, Ellen Czerski and Uncle, Walter Czerski.

Family and friends will be received Thursday October 11, 2012 at the Bauknecht-Altmeyer Funeral Home and Crematory 441 37th Street Bellaire, Ohio 43906 from 11AM until the time of service at 1PM with Father Daniel Heusel officiating.

Donnie and family, deepest sympathy to all. All this time I never knew that your step-dad was Robert. I went to school with him. I always called him “Bunny”. So very sorry for your loss. May he rest in peace. Love, Jeanie

going to school with robertbob i remember a sharp mind . why! rabbit could recite the baseball statistics of any baseball team you named.just like those stats.life itself gets confuseing,like why such a happy,good man was snatched away from our world.please accept my condolances.we all know the “rabbit” is happy darting across that great baseball field in the sky.

Janice, So very sorry for your loss… May Robert be at peace in the arms of our Lord. All Our Love & Prayers, ALWAYS, Gary, Kim, Hunter, C.J., & Jenna

Little Robert Hill, You will be missed. Robert grew up around here with my boys and spent lots of time at our house. He was a very polite boy. My sympathy goes out to Charlie and the family.

Robert and I were friends at St. Johns Grade School. He was a good person we all liked to be around. Rest in Peace Buddy.

Sunday Oct,7 I had to say goodbye to my brother and my bestfriend. Our love for each other was unconditional. Rest in peace Robbie your suffering is finally over. You will always be in my heart and soul. Love Mary Ellen Sis

There are things we have to get through in life, sometimes they’re like getting through a barb wire fence…they hurt. Robert & I crawled through a few of those in our time, sneaking into a footbal game or running from the law or getting through one of life’s many challenges. Every life has a purpose. To me, Robert’s purpose was to be one of my best freinds. He told me like it was, pulled no punches, kept me well grounded and never let me forget who I was. Buddy, I’m goning to miss you! You’re now in a place where you can watch over us and help us to always be ourselves. May your world be full of sugar magnolias as you listen to Uncle John’s Band down by the river side…cause, we all know, what a long strange trip it’s been! Rest in Peace, Buddy…Love Tommy

to the hill family , my condolences for the passing of on of my grade/high school buddy. we had a few laughs together, hanging out , cruising and boozing. r.i.p rabbitt sincerely peter wood

To The Hill Family:

Please accept my deepest condolences for the loss of Robert,and may God continue to provide us all with strength during this very difficult time. Rest in Peace Robert, Rest in Peace my Friend