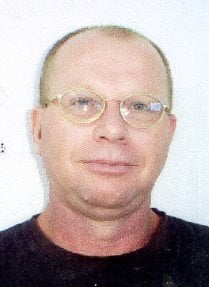 Obituary for:
Robert A. George
Age: 57

Robert A. George, 57 of Carmel Achor Road, Rogers, OH died at his home on Friday, September 11, 2009 following a brief illness. He was born in Oil City, PA on December 8, 1951, a son of the late Robert C. George and Betty Louise Sanner George of Oil City, PA.

Moving to this area from Oil City in 1980, Bob worked for 37 years at the former Continental Can Corp and then Graham Packaging Company in the General Plant Maintenance Depart., last working on Wednesday. He graduated from Oil City High School in 1969 and enjoyed any type of outdoor activity.

His wife, Darlene “Dolly” Stiller George survives him at home. They were married on December 14, 1985.

Services will be held at the Calcutta Chapel of the Martin MacLean Altmeyer Funeral Homes on Sunday, September 13, 2009 at 5:00 PM with Rev. Paul Sturm officiating.

The family will be present to receive friends at the funeral home in Calcutta on Sunday from Noon-2:00PM and 3-5PM

I was so sorry to hear of Bobbys passing, my familys prayers and thoughts are with all of you at this time.

I was so very, very sorry to learn from Dad that Bob died yesterday. I can’t even imagine how difficult this time must be for you. I hope it helps in some small way for you to know that I am holding you in my heart and in my prayers.

We are saddened with the loss of Bob. Fred and Bob have worked many years together and I know that Fred will miss him dearly. His willingness to always help Fred was something that Fred will cherish. May the Lord guide you during this time of sorrow. We know that Bob is up in heaven and doing great with no illnesses. Love, Joan & Fred

Dolly and Justin–our deepest sympathies and condolences are with you and all of your family. You will remain in our thoughts and prayers.

We are shocked and saddened. We will remember Bob’s laughter and his genuine interest in what was going on in the lives of his friends and family. We will miss him. Please know that you both are in our thoughts and prayers.

Dolly and Justin, My family and I are very, very sad to hear of Bobs passing.He and I had a lot of laughs over the years.We would set in the lunch room or in the locker room and as we called it “stir the pot.” joke with the guys I will sure miss Bob and all of the laughs we had. Your family will be in my prayers. Trust in God.

Friend and co-worker,you will be sadly missed at the Can. My prayers are with you and your family.

We are so sorry for your loss. Our thoughts and prayers are with your family.

I haven’t seen Bobby in quite a few years, but have many good memories from when we were kids. My thoughts and prayers are with all of you.

I’m so sorry for your loss. I worked with Bob at the plant and there isn’t anybody there better at figuring out what was wrong with the machinery than him. His knowledge of his job and his outlook on life will be sorely missed.

We are so sorry to hear of your loss, please know our thoughts and prayers are with Bob and you.

My sincere condolences to Betty, Larry, and Kevin.

Growing up next door, I remember “Bobby” very well. Although a tad older than me we still did things together. He seemed to enjoy pranks which I also enjoyed, even when I was the target.

I am sorry for his passing at such an young age.

Pease be with him, his family, and all of you.

Sorry for your loss. Wish I could be there. Love, Joel & Jolene Kurtz

We are so sorry for your loss. You are in our thoughts and prayers.