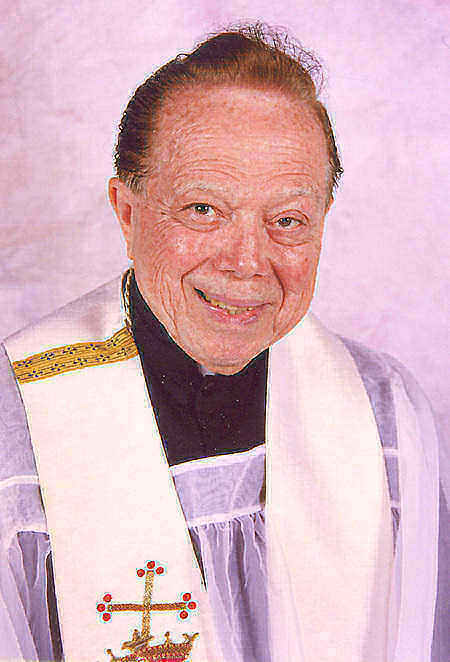 CAMPI, Rev. Vincent L., died October 7, 2012 at the Good Shepherd Nursing Home at the age of 92.
Father Campi was born June 28, 1920 in New York, to Dionisius and Anna Madonna Campi.
Father Campi made his preparatory studies for the priesthood at the Pontifical Gregorian University in Rome and at St. Mary’s Seminary and University in Baltimore. Father Campi was ordained for the Diocese of Richmond, VA at St. Patrick’s Cathedral in New York on December 1, 1945.
Parishes in the Diocese of Richmond where he served include: Blessed Sacrament Parish in Alexandria, VA; St. James Parish in Falls Church, VA; Sacred Heart Parish in Norfolk, VA; Our Lady of Nazareth Parish in Roanoke, VA; St. John Parish in Warrenton, VA, where he was instrumental in building a new church; and St. Joseph Parish in Martinsville, VA.
In 1973, Father Campi became pastor of St. Anthony Parish in Ridgeley, where he served until his appointment in 1983 as pastor of St. Peter Parish in Harper’s Ferry.
Father Campi retired from active ministry on June 20, 1995.
In January 1996, he was called to be the chaplain of the Visitation Academy of Frederick, MD until September 2006. He referred to his students of the Academy as his “little angels”.
Father Campi is survived by nieces and nephews;
Robert Campi and his wife Kerry of Burbank, CA, Jeannine Campi also of Burbank, Sally Campi of Ann Arbor, MI, Tom Campi of Santa Barbara, CA, Tim Campi of Ypsilanti, MI, and 2 dear friends, Donald and Carole Deegan McKinney of Frederick, MD.
Friends will be received on Wednesday, October 10, 2012 from 10:00am until time of the Mass of Christian burial at 11:00am at the Bishops Chapel, Mt. Calvary Cemetery, with Monsignor Fred Annie as celebrant.
Burial will follow in Mt. Calvary Cemetery.
Memorial contributions may be made to the Visitation Academy, 200 E. 2nd St., Frederick, MD 21701.
Online condolences may be extended to the family at www.altmeyer .com

I had both the privilege and honor to be a member of Father Campi’s parish at St. Peters in Harpers Ferry. He married my husband and I, 25 years ago this past October. He also christened both of our children. I loved hearing his homilies. What a wonderful man with such strong faith and love for our Lord. May he enjoy many strolls down the streets of Gold in Heaven. He earned it.

I served Mass for Father Campi at the Visitation Academy from 1996 until 2006. I will always remember him for his tireless devotion. Much of what I know about the Faith, I learned from him. I’m sorry that I haven’t seen him for 6 years and that I could not attend his funeral Mass. Requiescat in pace. Amen.

My family and I were privileged to know Father Campi. We attend mass at St. Peters in Harpers Ferry and Father married me and my husband. He also helped me to convert to Catholicism after our marriage. My daughter attended Visitation Academy and he was one of the main reasons we chose that school for her to attend. He taught her reverence and devotion to the faith. She learned so much from him. He was always a wonderful example and a kind man. RIP Father Campi.

My wife and I and our six children were privileged to know Father Campi during the ten years he served as Chaplain at the Visitation Monastery. Father was a faithful priest devoted to the Faith. He was also an excellent confessor. Our family has many fond memories of Father Campi and we will always cherish the friendship that we had for over ten years.

Our daughter is 16 now, but the photo of her that I always carry is of her and Father Campi at the celebration of First Communion at Visitation Academy. He embodied the joy of service. Knowing him was a privilege and a blessing.

R.I.P. Uncle Vincent I will always remember your smile and kind disposition towards all living things. I remember @ Dad’s funeral you said that would have the Nun’s pray for Dad………… cause the Nun’s praying for you can almost guaranteed you get to heaven. Not that you needed any help Uncle Vincent but I’m sure that Nun’s everywhere where praying for you. You touch so many lives in journey thru your life on earth that I am sure you will be sitting with God always. Say hello to Mom & Dad in heaven for all of us. You will always be in our hearts.

We were married by Fr Campi in Feb 1967 at my military base, Vent Hill Farms in Warrenton Va. I had to attend preparation classes with him in Dec 66, we met several times and basically discussed Vat II and its changes in the modern church, something still in vogue today. I also remember he was late for the wedding, but he still arrived before my bride from Charles Town WV. When I hear people talk of “cold feed” at a wedding I truly know what they mean. I do remember Fr Vincent struggling with raising funds and paying for the new building their at St John’s in Warrenton VA. We visited the same Doctor here in Martinsburg and I always talked of fond memories with him, Rest in Peace Good Friend, may God Bless You-always.