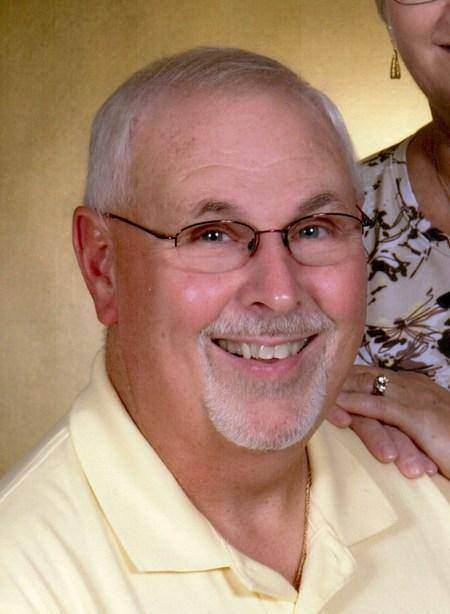 Gast, Raymond Lee, 67, of Moundsville, WV, died Monday, January 6, 2014 in Liza’s Place, Wheeling, WV.
He was born December 27, 1946 in Wheeling, a son of the late Robert P., Sr. and Laverne Schultz Gast.
Ray was a former employee of the Moundsville Housing Authority and a member of the First Christian Church, Moundsville, where he served as Deacon Emeritus. He was also a member of the Knights of Pythias.
In addition to his parents, he was preceded in death by a brother, Robert Gast, Jr.
Surviving are his wife, Karen Hummel Gast; two sons, Chad Lisa Gast of Moundsville and Corey Jolie Gast of Sherrard, WV; a sister, Linda Fowler of Florida; five grandchildren, Broc, Acey, Heath, Addy and Zane Gast.
Friends received 10:00 a.m. until the time of the Memorial Service at 11:00 a.m. on Saturday, January 11, 2014 at the First Christian Church, 1200 3rd St, Moundsville.
Memorial contributions may be made to the First Christian Church, Moundsville or Liza’s Place, c/o Valley Hospice, 100680 St. Route 150, Rayland, OH 43943.
Arrangements by Altmeyer Funeral Home, Lutes & Kirby-Vance Chapel, 118 Grant Ave., Moundsville.
Online condolences may be expressed at altmeyer.com.

Very sorry about your dad. My thoughts and sympathy are with you, your mother and brother, and the rest of your father’s family and friends.

Dear Karen and Family, You are in our thoughts and Prayers. Duane will always remember the memories of Ray, that he had at the store on Popular. God Bless you all

Dear Linda, Bill and Gast family,Please accept our most sincere condolences at the loss of Raymond.How devastating to lose both brothers so close together.We are so very sorry for all of you. We will keep you in our hearts, thoughts and prayers. Love, Bonni and Don

Fair winds and following seas,may forever you feel,upon your cheek, the salty breeze.

Your spirit lives on in many a heart,your words captured,and never to depart.

May your loved ones have the comfort in knowing,to heaven is where you are going.

For all that they have to do is look above,and they will be reminded of your love.

I am saddened to hear of Rays passing. Ray and I were classmates through all of our school years and very good friends growing up and we were roommates at our first year of college. I was very found of Ray’s parents and have many good memories of them also. Sorry to say I have not seen Ray for many years due to our relocation to Georgia although I have thought of him often.

My thought and prayers go out to his family.

I am so very sorry for your loss. Ray’s smile and upbeat attitude will never be forgotten. He will be dearly missed. My condolences to the Gast Family. God Bless.

I am so very sorry to learn of the

death of Raymond. He and I were in

Kindergarten together at Warwood

Rice, was our teacher. My Mom always

thought so much of Raymond. She and

I met Raymond a few years ago and

spent time talking about the grade

school years. My thoughts and prayers are with his family.

I’m so sorry to hear about Ray. I have so many good memories of you, Karen, and Ray being our youth leaders. You are in our thoughts & prayers. Becky & Joe

I am so very sorry to hear of your loss. Ray was a kind and gentle man that I have had the pleasure of knowing and sharing a friendship with. We all have many happy memories of High School and years thereafter to hold onto. My thoughts and prayers are with you at this time.

I am so saddened by Ray’s passing. I wish you and your family peace.

I am so sorry to read of the loss of your husband. Please know that you and your family are in my thoughts and prayers. We will have to have lunch the next time I am home. Again, my deepest condolences.

Karen-I am so sorry to hear this. Please accept my condolences. My thoughts and prayers are with you and your family.

I am so sorry for your loss. Ray was a kind and gentle man. He will be missed by many. Again, my condolences. Your family remain in my prayers.

Karen, Chad, Lisa, Corey and Jolie- My heart goes out to you all for the loss of Ray. He was such a happy go lucky person with a great smile and contagious laugh! I pray for peace and comfort for all of you. I wish I could be there to give you all a hug but will be thinking about you! Lots of Love,

To you, Bill and the Gast family, our sincere sympathy. MaryAnn and Arland

You and your entire family are in my thoughts and prayers at this time.

Our love and prayers are with all of you as you celebrate the life of Ray – one whom I have been blessed to count as a friend and a dear man of faith. Love and Blessings,

Ray was always one of the best parts of going to CYF. It was always easy to get a smile out of him or make him laugh. My prayers are with you Karen and you family.

So long Ray, until next time.

To Rays family and friends….so very sorry for your loss He was a great guy and a hard worker when we worked at Gast bakery many years ago. Please know we are praying for your comfort.

We will always remember Ray with a smile on his face and a kind word for all. We have some wonderful memories from school events such as band and dances.

Our deepest sympathy to Ray’s family.

When we first met Ray we could see in his eyes what a kind person he was. Heaven called another angel home. May God bless him and his loved ones, family and friends and help them to adjust to no longer having him in their lives. He will live on in memories of all who knew and loved him. Rest in peace Ray.