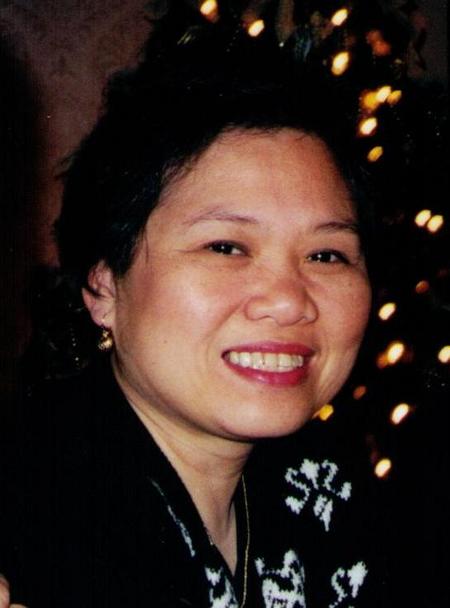 Raquel Toledo Encabo, 54, passed away on Saturday, September 9, 2006 at Riverside Regional Medical Center after a long battle with cancer. She had been a resident of Newport News since 1993. She was preceded in death by her daughter Marie Jessel Encabo. Raquel is survived by her beloved husband of 31 years Jesus Encabo, daughters Jessa Encabo and Karissa Encabo Serio and husband Steven; her parents Mr. and Mrs. Hugo Toledo, of San Diego, CA. her brothers; Paul Toledo of San Diego, CA. Arthur Toledo of San Diego, CA, Noly Toledo of Monroe, WA, and Joey Toledo of Turlock, CA. two sisters Nenita Toledo Alcantara of San Diego, CA and Imelda Toledo Gameng of Newport News,
There will be a funeral mass at St. Jerome Catholic Church with a viewing to proceed for family and friends at 10:00 am Tuesday, September 12, 2006 with Father Joseph Majewski presiding. There will be a reception following the service.
Arrangements are under the care of Altmeyer Funeral Home

To the Beloved Family,

From our family’s hearts to yours, our deepest and sincere sympathy and prayers in your time of sorrow. Raquel was truly a great blessing to all of us and will be greatly missed!. Our comfort is she has peacefully joined the kingdom of God.