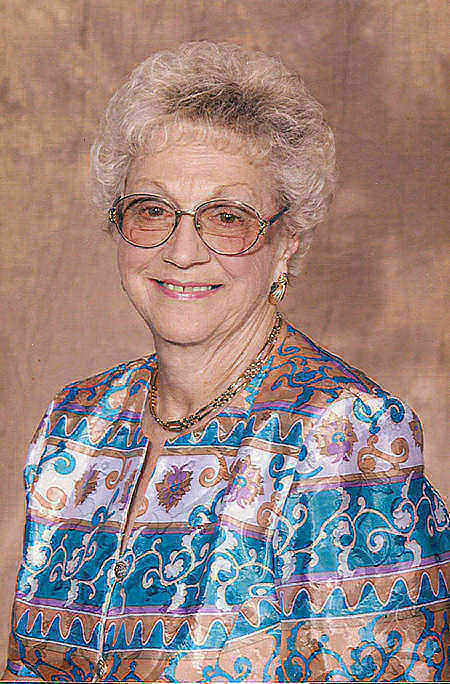 WARSINSKY, Phyllis Ann, 82, of Benwood, died Sunday, November 24, 2013 at Liza’s Place, Wheeling.
She was born December 8, 1930 in Parkersburg, WV, a daughter of the late Clyde and Edith Shriver Barker.
Phyllis was retired from General Motors-Packard Electric, was a member of St. James Lutheran Church, Wheeling and was a member of the Daughters of the Nile.
In addition to her parents, Phyllis was preceded in death by her first husband, John McGlone, Jr., in 1987, a son Dennis McGlone, and a brother, Bob “Bugs” Barker.
Surviving is her husband, John “Jack” Warsinsky, a son, Steve McGlone and his wife, Rosemarie, of Buffalo, NY, a stepson, John R. Warsinsky and his wife, Sandy, of Benwood, a daughter in law, Patricia McGlone of Philadelphia, PA, 5 grandchildren; Sean, Shane, Matthew, Jeffrey and Kelly, and 6 great grandchildren; Hayden, Cole, Connor, Brendan, Mary Kate and Blake.
Friends will be received on Wednesday, November 27 from 2:00pm until time of services at 7:00pm at the Altmeyer Funeral Home, Benwood-McMechen Chapel, 214 Marshall St., McMechen, WV, with Pastor Deborah Gable officiating.
On Friday, November 29, 2013, there will be visitation at the McFarland Funeral Home, 271 North Park Ave., Warren, OH from 2:00pm until 6:00pm.
Services will be held on Saturday, with burial at All Souls Cemetery, Warren, OH.
Memorial contributions may be made to Liza’s Place, Wheeling or to the Shriners Hospital for Children.
The family would like to thank Liza’s Place for the outstanding care given by the nurses and aides.
Online condolences may be extended to the family at altmeyer.com

Jack; My deepest sympathy to you and your family for the loss of Phyllis, may the good Lord comfort & Bless you, and give you Peace.