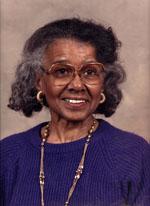 She was born December 15, 1920 in Cumberland, Md., a daughter of the late Raymond L. and Sadie Coleman Francis. She was retired from Blue Cross & Blue Shield Inc., Wheeling; and was a member of the former Blessed Trinity Catholic Church, Wheeling.

In addition to her parents, she was preceded in death by a sister, Evelyn Washington Sharpe; and a brother, William Hetzel Washington.

Friends will be received at a memorial gathering from 11 am until 1 pm, Saturday, December 29, 2007 at Altmeyer Funeral Home, 1400 Eoff Street, Wheeling.

Following the memorial gathering, a memorial service will be held at 1:30 pm, at Mount Calvary Cemetery Bishop

As a little girl growing up in the Blessed Trinity Parish I recall seeing your Mother at daily Mass. My thought then was, what a woman of dignity, my thoughts now are, what a woman of faith.

Our prayers are with you.

Dear Kenney, Raymond and Tommy and the rest of the family – I know how it is difficult to lose your mother but she is in a more beautiful place now. She was a lovely person and I will never forget her. My sincere sympathy to all of you. Love, Bernadette Washington

We were so sorry to hear of the passing of your Dear Mother.

Our thoughts and prayers are with you at this time.

Dear Tom and Patty and the rest of the Dennard family, I was so sorry to hear of Nita’s passing. I remember the good ole days of working with her at BCBS. She was a very quiet loveable person and I want to offer my condolences to you and your family at this time. Be Blessed, Carol Burress

Sorry to hear about your mom our prayers and thought are with you and your family.

I extend my sincere condolences to the entire Dennard family. In sad times as this we can find strength in God’s promise to reunite us with our loved ones by means of a resurrection and that soon “He will actually swallow up death forever.” – John 5 vs.28,29; Isaiah 25 vs.8 May this precious hope that awaits us and your cherished memories of Phyllis bring you a measure of comfort in this difficult time.

I’ll miss you always, and love you forever!

May God be with all of the family and always seek comfort in prayer. Love always, Karen and Clark Calloway

My prayers are with you boys.Your mother was a good personI know she is in a better placeKaren Wells Conway.

Our thoughts and prayers are with you. LOVE, ANDREA HARE AND SONS,BLAKE,CHRISTOPHER AND PIERCE

Still finding it hard to believe your really gone mawmaw, Just know you were one of the best grandmothers there ever was and i will forever and always hold you near and dear to my heart !

I love you always and forever Your grandaughter Erica

To the Dennard Family,

You are in my thoughts and prayers.

So very sorry to read of your Mom’s passing. I am out of town and can’t stop to see you in person.

I am sure I will see you at the dealership, we will talk then…

I will always remember your mother as someone very special.I know my mother thought the world of her.My thoughts and prayers are with you.

Your mother and my mother were very close. Due to the passing of my mother,these two dear friends were separated. Now,they have been brought back together to coninue their journey.

Loving you beyond death and its eternity ,is indeed a truth profound…Thinking upon you a lot ,since I see the twin of you daily now within my own dad Raymond ,Oh how I treasure the memories ,laughs,lessons,wisdom ,of you…You were a beautiful soul ,Lady of Elegance& Strong determination ,faith& its grace …Spoke with such eloquence and intelligence and its intellect,until the very end you never forgot us . It’s why I could never forget you or your love…Continue to sleep in the Lords perfect peace my Honey Grams!! Til we meet again may the good Lord bless& keep you & us all in Jesus Name Amen…❤