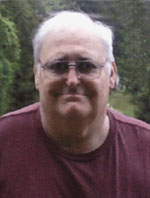 Phil was born April 1, 1947 in Wheeling, a son of the late Joseph and Jessie Criswell Morris. He was retired from the Mine Safety and Health Administration and was employed at the Tunnel Ridge Mine. He was a member of the Mount Olivet United Methodist Church; the Fraternal Order of Eagles, Aerie No. 1891, Elm Grove; and was a U.S. Army veteran, having served during the Vietnam War.

In addition to his parents, he was preceded in death by his brother, Randall Morris.

Friends will be received at the Altmeyer Funeral Home, Elm Grove Chapel, 154 Kruger Street, Wheeling, from 4-8 pm, Thursday and from 10 am until time of funeral services at 11 am, Friday, September 21, 2012, with the Rev. Greg Markins officiating. Interment will be in Greenwood Cemetery, Wheeling.

My thoughts and prayers go out to you and the girls. I always enjoyed our visits and thought a lot of Phil. So sorry to hear of his death.

We were so sorry for the loss of your husband, father, and grandfather. We always enjoyed running into you in Washington and getting to chat. Phil was a very nice man. May our Lord embrace and comfort you all with your wonderful memories of him. May you also have peace knowing that he is in the Lord’s care now. God bless you all.

I am so sorry for your loss. I have known Phil since I was a child and spent many weekends at Jesse and “Goats” house. He was like a big brother when we were kids and although we went our different ways as adults, I always think kindly of him. Any time we ran into each other, he talked of how much his children meant to him. I know how proud he was of each of them. He will be sadly missed.

I will always remember Phil as a “Gentle Giant”. Phil was proud of his family and deeply cared about everybody and everything. He will truly be missed by all of his co-workers here at the MSHA Approval and Certification Center. Wehis co-workers appreciated his dedication to safety and health in the mining industry, but will remember him most for being an upstanding and respectful human being, a super good friend,and a true sportsman.

May Phil’s family accept our heartfelt sympathy and feelings of loss.

I worked with Phil at MSHA. He was a great guy and was really liked by all the people who worked with him. I am so sorry for your loss.

Michelle and family, I just wanted I say how sorry I am for ur loss . Phil was a wonderful man and he always made me laugh every time I came to ur house. I was so fortunate to have been able to have him in my life. If u need anything don’t hesitate to ever call . 13047801682. Love u guys Denise

In this time of great loss, remember Phil for what he was. A great husband, father, and friend to many. Although you will never replace him in your heart, know that he is always with you to guide you. When you need him, just think “What would he do?” and youll always have the right answer to guide you. God needed another angel, and He always makes the right choice. Remember to keep Him by your side, and you will always have Phil smiling down at you. We love you.

Phil was a great person and an asset to MSHA. He will be missed by MANY.

Phil was such a nice person. He will be missed by so many. May he rest in peace. Sandy Hall

SO SORRY FOR YOUR LOSS

YOU ARE ALL IN MY THOUGHTS AND PRAYERS

Sorry for your loss, he was a great guy, we all grew in the Vineyards and all was family, you are in my thoughts and prayers. Remember the good times. God bless all

To Mrs. Morris, Michelle, Stephanie and the family,

To the Morris Family, So sorry for your loss. I always enjoyed talking to Mr. Morris when we would meet at the mall.

Trust in Gods goodness and lean on his love.

We are so sorry to hear about your loss. Our thoughts and prayers are with all of you during this difficult time.