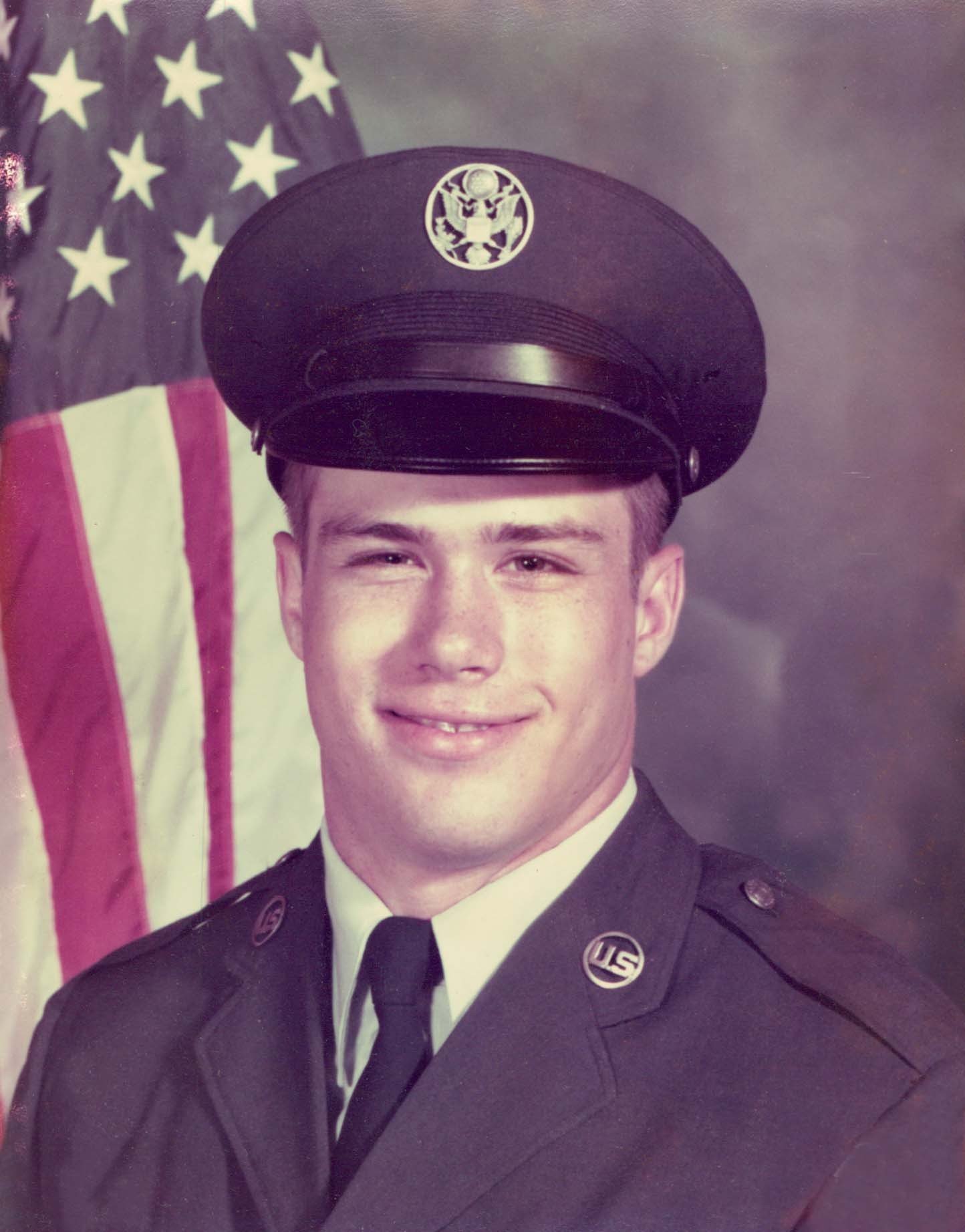 Paul “Tony” Rose of Piedmont, Ohio, formerly of Bellaire, passed away Wednesday, January 29, 2014, in the presence of his family, at Wheeling Hosptial, Wheeling, WV.

He was employed by Toys -R- Us Robinson Township Pa, a member of St. John Catholic Church and a 13 year Air Force Veteran.

Family and friends will be received Friday January 31, 2014 from 3pm-8pm at the Bauknecht-Altmeyer Funeral Homes and Crematory 441 37th Street Bellaire, Ohio.

Funeral liturgy with Mass will be at 1:30p.m. Saturday at St John Catholic Church Bellaire, Ohio with Fr. Daniel Heusel as Celebrant.

Internment will be at the convenience of the family.

Belmont County Council of the American Legion will conduct Military Honors at 1p.m. Saturday from the funeral home.

Condolences may be expressed to the family at altmeyer.com.

Coach and Mrs Rose, I am so very sorry to hear of the death of Tony. My heart breaks for the both of you. He was a good man. I only wish life didn’t separate people so much. It seems like only yesterday and it was 1972 that I walked into Mrs Rose’s eighth grade classroom and began to know the Rose family for the first time. Whomever coined the phrase time flies sure knew what the hell they were talking about. It’s a damm shame we all can’t just go back every once and awhile and relive some of those precious memories. Coach–I am not sure you know this but here is a true story in regards to Tony. We all remember St. John’s gigantic 18-16 victory over Bellaire on the safety in the final seconds and the Irish football players walking through town back to the school after the game and I am sure you remember St. John’s was leading 16-0 at halftime and Bellaire came back to tie the game in the final couple of minutes but I am sure what you didn’t know was at halftime under the visitors stands I went in to help ice some of the players down Tony gave a passionate speech and was screaming as tears were running down his face “They beat my Dad and by God this one is going to for him. This is for my Dad.” I will never forget that. I am so sorry I can’t be with you all of all times I have an all day meeting on Friday and my little nine year old guy has a basketball game on Saturday. You all will be in my prayers as unfortunately there is nothing but time that will heal the pain I know you all are in. Take care of yourselves and enjoy the precious memories. Joe Boczek, Morgantown, WV

My deepest condolences for your loss. I was shocked and saddened to hear the news about Tony. I have many great memories of growing up with Tony on Franklin Street and in school. I will always remember his smiling face. May he RIP. My thoughts and prayers are with you .

So Tony has passed on to greener pastures. We know you both have broken hearts now and that the sun will shine on you. Love to all. Dick and Linda

I was shocked and so saddened to learn of Tony’s passing. We were very close friends back in grade school and high school. Went to Prom together. He was a fun guy, always smiling. My heart goes out to you.

Dear Rose Family, My deepest condolences for your loss. I have so many fond memories of Tony from our younger years. I think we all remember that smile, so I love the picture you chose to use. I talked to Tony, at Riesbeck’s, quite a few times. It seemed like all those years just slipped away and we were those young kids, again. But, I hadn’t seen him for awhile and then I heard he was sick. So, when I heard that he had passed, I was deeply saddened. I know that God has taken away his suffering and he is now in Heaven with him. Please know that Tony will always be in so many of his classmates’ memories. Prayers to you, his family, that you may have some peace knowing so many people have such fond memories of Tony. God Bless You.

Deepest sympathy to the family at this difficult time. I have lots of fun memories of Tony. Football Games, Savoy, School, Partying at the steps, Riding the loop in Shadyside. Oh the memories I will cherish. We had a lot of fun. He was a good, fun guy. Prayers to the family. I’m sure you all have lots of memories to cherish as well. God Bless.

Hey Susan I am really sorry for your loss. I will keep you in my Prayers. We all know he is in a better place now! Love & Prayers

I am so sorry for your loss. I wish to express my condolences to the family. With the help of our loving Heavenly Father, your family, friends and all the memories shared, you will receive the comfort and support you need to cope with your grief.

I am sorry to hear of Tony’s passing.Tony was a good neighbor,and a very happy person to be around. My sympathy to Sue and Tony’s family.

It sadden my heart to hear that a great man has passed. My condolences and prayers for tony and his family. I’m sure Tony is at peace and his spirit will live on. I will always remember him as a kindhearted soul.

May your memories of Paul “Tony” Rose, give you peace, comfort and strength…

My thoughts and prayers are with you at this time and always.

I am so sorry for your loss. Keeping the Rose family in my prayers. Rest in peace Tony.

My deepest sympathies to Susan and the family. I was just talking about Tony Tuesday night with my wife, Gini. We both worked with him years ago at Toys “R” Us where the two of us met, actually and were sharing old stories – I was saddened to hear the news right after our conversation. I remember him always bringing me the best deer jerky and the two of us taking his truck out one evening trying to hear some whistle that it was making. It was such a slow night – I’m pretty sure he just wanted to get out of the store for a while. I’ve missed him since changing jobs and I know he’ll be missed dearly by his family and friends. He really was a stand-up guy – I’m glad I got to know him and work beside him. My prayers go out for the family for comfort.

my deepest sympathy goes out to the Rose family on Tony’s passing , he was a classmate in grade school and high school. Tony lived up to being a heck of a football player and serving in the Air Force. Rest In Peace

Paul and Rhea, I just heard about your loss of Tony. I am so very sorry. I remember what a great kid Tony was when Mike D. and I dated. I am sure Theresa and Moodie are welcoming him to his eternal home. My thoughts and prayers are with all of you.

We were so sorry to hear of your son’s death. It’s so difficult to lose a child and our prayers are with you. May you experience God’s comfort.

I am so sorry to hear of Tony’s passing. My thoughts and prayers are with you all during this time. As our faith tells, he has found eternal life in paradise, where we will be united with all of our loved ones one day. May he rest in peace.

God bless you all!

Rose family, so sorry to hear about Tony. It’s always hard to lose a loved one. I will keep you all in my thoughts and prayers.

Sorry to hear of your son’s passing. We had a child pass away many years ago and can feel your pain.

I am thinking of you Susan and want you to know my ♥ love and condolences are with you now. Tony was a handsome guy, and we all owe him thanks and gratitude for his military service. I thank him now. I am so sorry to hear of the illness, trials and tribulation both he and you have been through. I am most sorry for your loss. I offer love and support if there is ever anything I can help you with. I hope and pray you can find some solace in your best memories with him and that each day will help to ease your pain. I love you Susan Rose and miss you so much. I wish I could be there in person to tell you. Condolences to all of his family and friends.

Susan, Mickey & I are here for you anytime you need us. You and Tony will always be the greatest of friends to anyone who knew you. Mickey can only think of you in times like this and you know that she is just a phone call away. We love you guys and God be with you… Rick & Mickey

Thoughts are with you all. Hoping you can find some moments of peace during this most difficult of times. Rest in Peace Tony and Thank You for your Service.

To the Rose Family so sorry for your loss. I pray for peace in your hearts today and always .

To the Rose Family, I was so sorry to hear about Tony. My heart goes out to your family and my thoughts & prayers are with you. I have many fond memories of our days back at SJC. Tony had a great sense of humor and a fabulous smile. I posted the news on our SJC Class of 1979 Facebook page and so many classmates have written their condolences about Tony. We all have fond memories of Tony and remember what a great athlete he was. My deepest sympathy to your family.

tony was a great guy, lot of memeries from childhood days. RIP