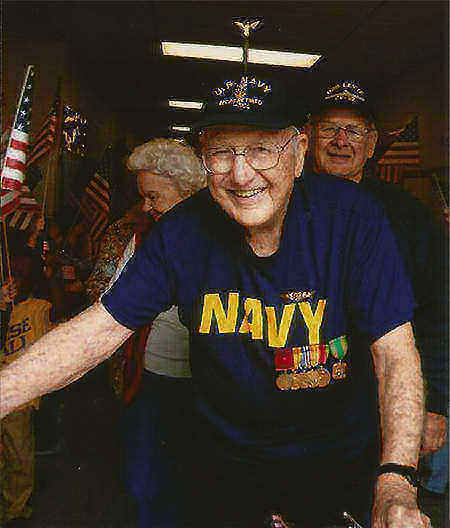 Paul retired from the U.S. Navy as a Master Chief after 29 years of dedicated service where he was awarded the Navy/Marine Commendation Medal. He was a member of Cornerstone Baptist Church and was an avid bingo player.

Paul leaves behind his wife, Martha Legg; two children, Terry Legg and his wife Nancy of Portsmouth, and Paul Legg and his wife Sally of Suffolk; two step-children, Melissa Brandmier and her husband Kenneth of PA, and Melinda Hardin and her husband Eric of Richmond, VA; six grandchildren; and six great-grandchildren. He was preceded in death by his first wife, Ruth Muldoon Legg; infant daughter, Joann Legg; his brother and sister, Milton and Josie; and his step-son, Mark Adkins.

A Funeral Service will be held at 11 a.m. Monday, September 10, 2012, at Altmeyer Funeral Home, 5792 Greenwich Rd in Virginia Beach. A reception will follow the service at the funeral home. Burial will follow at 2 p.m. in Forest Lawn Cemetery with full military honors being accorded. The family will receive friends Sunday from 5 to 7 p.m., September 9th, at the funeral home. Condolences may be offered to the family at altmeyer.com.

May you rest in peace. And God bless and keep your family.

We will miss you in our Seniours group.

My sincere condolences to the Legg family. I was one of the Palliative Care team members that helped to care for Mr Legg while he was in Sentara Leigh. I felt privileged to get to know him during that time. Although the time I talked to him was relatively short, I could tell he was a very special person and that his wife and family meant everything to him. May God hold you in his arms during your grief. Mary Beth Carr, NP

Please except my condolences on the passing of your father. I can still remember the day he brought Marsue and myself over to look at the house he had just listed in Deerfield. Doesn’t seem that long ago.

Another “shipmate” has joined the Grand Fleet in the sky.

We are thinking about you in this time of sorrow.

Paul, I am so sorry to read of your dad’s passing. I pray your memories of him will bring you comfort. Debbie Bowman Gillis

I was so sad to hear the passing of Paul.

He loved to tell me his stories of flying in the Navy,his work as a realtor,father and husband. lets not forget ms tinkerbell

I will truly miss his big beautiful smile. ok mjo