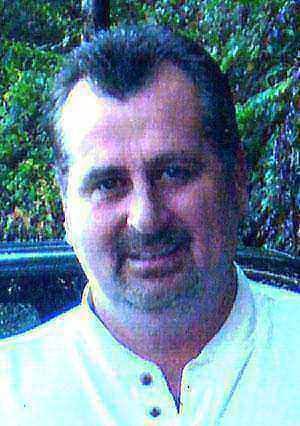 EASTHON, Paul C., 43, of Wheeling WV died Friday, November 10, 2006 at Wheeling Hospital.
Born in Wheeling WV on November 27, 1962, Paul is the son of Richard and Phyllis Runnion Easthon of Wheeling.
He was an employee of Marietta Coal Company, Bellaire OH and a member of St. James Lutheran Church, Wheeling.
Paul was preceded in death by his first wife, Donna Burger Easthon; his uncle, James Easthon; his aunt, Mary Kay Yoders and several other aunts and uncles. As a gift to others, Paul chose to be an organ and tissue donor.
Surviving are his wife, Terri Hartnett Easthon; one son, Paul Easthon of Wheeling; one daughter, Mariah Easthon of Wheeling; a step-daughter, Nicole Easthon of Wheeling; one brother, Mark Easthon of Powhattan Point OH; his sister, April Thompson of Wheeling; two nieces, Monica Smith and Brittney Thompson; his great niece, Brooke Smith and his great nephew, Logan Smith.
Friends will be received at the Altmeyer Funeral Home, 1400 Eoff St. Wheeling WV, on Monday from 2-4 and 6-8 pm where services will be held Tuesday at 10 am. Interment will follow at Greenwood Cemetery, Wheeling. The family asks that memorial contributions be made to the Paul Easthon Fund % WesBanco Bank, 1 Bank Plaza, Wheeling WV 26003

To the children of Paul Easthon,my cousins that I love very much,family friends and loved ones.Our hearts hurt for you in the loss of Paul.He will forever be in our thoughts and hearts as we loved him and his funny character.So many laughs.May God bless each of you at this time of your life.Our prayers and thoughts are with you.We love you so very much Paul and Mariah.