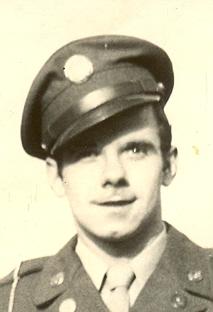 Paul Andrew Smith, 81, formerly of 11th Street, Wellsville, OH died suddenly at the home of his daughter in New Cumberland, WV on Friday, November 10, 2006. He was born in Randolph County, WV on November 10, 1925, the son of the late Walter A. and Tressa Bender Lucas.

Living his entire life in this area, he worked as an electrician for the former Crucible Steel Mill and then J&L Steel in Midland for over 25years before his retirement in 1985. He served in the US Army during World War II and was a member of the VFW Post 5647 of Wellsville.

Besides his parents, two sons: Paul A. Smith, Jr. and Kenneth R. Smith; one daughter: Donna Jean Smith and Infant Twins preceded him in death.

Services will be held at the Wellsville Chapel of the Martin MacLean Altmeyer Funeral Homes on Wednesday, November 15, 2006 at 11:00 AM with Rev. Paul Sturm officiating.

Burial will follow in Yellow Creek Cemetery where the Tri State Burial Group will accord military honors.

Hey pap just thought I’d write to you and let you know I miss you so very much..it still hurts that your gone and I know Dezzie still remembers you..we were talking about you last nite and she just kept rambling on about you…I just wish you had a chance to meet the boys because they would have gotten to meet a really great guy!!! I love you pap and I really miss you…I just wish you were here today so I could have that chance I never got to tell you!!! I love you pap and I miss you so much!!!

I miss you, PawPaw, very much,

You gave my life a special touch;

You rarely would get angry and you hardly got mad,

But when you were gone I was nothing but sad;

Now that you’ve left I feel there’s nothing more,

A piece of my heart, I felt was torn;

I went to see you I really did try,

But I knew it would be our last good-bye;

I saw your Angel she opened my eyes,

Even since then, I’m not afraid to cry;

I carry your Angel here by my side,

It is in her, that I can confide;

I know one day we’ll be together,

I will long for that day forever and ever.

I am goin to miss you telling me your goin to kick my butt.

I am sad at this moment in time for your loss, i pray for all of you in your time of greif

i am sorry to hear of your passing

I LOVE YOU, this is the hardest thing i’ve had to do Dad,but i know your with Grandma,give her our love,always and forever in our hearts.love you!!

I really love you and wish you were still here.I miss the way you would tell us stories when we came home from school.LOve and miss you Pap-Paul.

i will forever love and miss you dad!!! all my love,boobie lynn

I will miss you pap, take care of dad in heaven for me! I love you and will see you both again someday. Love you!

just wanted u 2 know im still thinkin about , luvin and missin u ,daddy!!!

Ok the day is coming around again and i know its going to be a hard day for alot of us… I just want you to know I love you and I miss you so much but u prob already know that u are my gaurdian angel and i know your always watching. today was des’s first day at a new school since we moved and she loved it I wish the kids could have met u and i know u met them cuz u watch over all of us and im so grateful for it!!!!! I love you and Ill be back to write some more I love u with all my heart!!!! Love Kare Bear and the 3 babies <3<3<3

Well, Dad it’s been 3 years yesterday…..still hasnt gotten any easier for mark , beth and I, hope you liked the cake we baked for you, sure do miss you. Truthfully , i could use your advice about now…I wish i could hug you and tell you how much you are loved and missed but i think you know that. I love you daddy