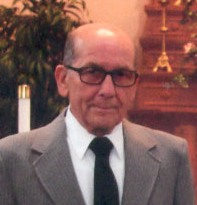 SMITH, NORMAN S., SR., 79 of McMechen, WV, died Saturday, December 10, 2011 at his home. He was born April 14, 1932 in Benwood, WV, a son of the late James W. and Margaret Gallagher Smith. Norman was retired from Wheeling Pittsburgh Steel, Yorkville Plant, past president of the USWA Clerical Union, was a member of the VFW and American Legion Blake Brothers Post 46, Benwood, where he was past Chaplain and current historian, was a member of St. John Catholic Church, Benwood, member of the Benwood Firemans Assoc., Dispatcher for the Benwood Police Dept., coached football, basketball and baseball for over 40 years for numerous youth groups and was a Marine veteran of the Korean War.
In addition to his parents, Norman was preceded in death by 2 brothers; James W., Jr., and Jack Smith, 3 sisters; Ellen Arlene Marsh, Shirley Murrin, Donna Arsenault, son in law Scott Melko and grandson Owen Smith.
Surviving are his wife, Patricia Campbell Smith, 6 children; Norman S., Jr. and his wife, Linda of Benwood, Kelly and his wife Mary Beth of Glendale, Thomas R. at home, James O. and his wife Linda of Glendale, Erin Lynn Bonar and her husband John of McMechen, Monica K.Melko of Bethlehem, 2 sisters; DoloresJohnPeterman of FL, SharonJohnSuter of CA, several brothers and sisters in law, 12 grandchildren; Zach and Amber Graebe, BriaTrentWolfe, JohnnyKatrinaBonar, Brandon and Andrew Smith, Robbie Bonar, Brock and Beth Ann Melko, Deidre, Nate and Nolan Smith, 4 great grandchildren; Jackson and Kennedy Bonar, Talor and Peyton Boston and a faithful friend, his dog Raider.
Friends will be received on Tuesday from 6-8pm and Wednesday from 2-4 and 6-8pm at the Altmeyer Funeral Homes and Crematory, Benwood-McMechen Chapel, 214 Marshall St., McMechen, WV.
Mass of Christian Burial will be celebrated on Thursday at 10:00am in St. John Catholic Church, Benwood, with Fr. Bekeh Utietiang as celebrant.
Entombment will follow in Mt. Calvary Cemetery Mausoleum, Wheeling.
Vigil services will be conducted on Wednesday at 8:00pm in the funeral home.
Legion services will be conducted on Tuesday at 7:30pm in the funeral home.
Memorial contributions may be made to Links for Leukemia, 1165 Market St., Wheeling, WV 26003
Online condolences may be extended to the family at altmeyer.com

Best wishes to Patty and the family. Norm was a warm, wonderful man. He was my freshman coach and was gracious enough to come install “his offense” for my son’s fifth grade team about five years ago. Great memories of basketball, the Smith family, and the double-decker couch. God bless.

Erin and family, So very sorry for your loss.I remember your dad as well as your mom being at everything at Donahue and supporting us all. May you all be comforted by the knowledge that another angel watches over you from heaven. God bless.

Your dad was a great person and he will be sadly missed by all who knew him. I am always here for you, if you need anything!!!!

Great man and great family, love and prayers to all of you.

I bowled against Norman many times at Reilly’s lanes and enjoyed his company very much. I know his whole family. You are in my prayers. He will be sadly missed!

I just want to send my love and prayers to my family. Uncle Norman touched so many lives. He will truely be missed.

I wish i was with you all now. I have spent the last few days, remembering and sharing storys. they have brought smiles to my face. I love you and miss you all.

May the peace which comes from the memories of love shared with Norm comfort you now and the days ahead. My thoughts and prayers are with the entire family.

My thoughts and prayers go out to the whole Smith family. Norm was my favorite coach. Not only did he prepare you well in his coaching, he also made it fun. I am sorry that I was unable to make visitation or the service. He will be greatly missed.

One of Norm’s greatest qualities was his ability to motivate you to be better…a better player, a better teammate, a better person. He didn’t believe in shortcuts. He expected you to work hard, give it your all and never quit. He stressed that results came through hard work and perseverance. He taught you the fundamental way of doing things and he held you to that standard no matter what extra work was required to perfect the skill. In other words, he held you accountable. I was too young to realize it at the time but Norm wasn’t just preparing me for the challenges I would face on the basketball court, he was preparing me for the challenges I’d face in life.

Norm always had a confident aura about him as if no matter what life could throw at him he would always be up to the challenge. He had a certain toughness or grit in which he instilled in his teams. I remember playing a game in high school where the score was close and the crowd was rowdy. The game was coming down to the wire and I happened to spot Norm in the crowd. We locked eyes and I could see he had a smirk on his face. That simple gesture, a smirk, was all that was needed for me to know that I was prepared for this moment because of him. I nodded my acknowledgement and knew that everything would be alright.

When DK called to inform me of Norm’s passing I was saddened by the news. I’ll miss seeing him at the gym and at the park. I’ll miss his laugh. But one thing I won’t miss is his voice, ever since I was a small kid on the streets of Benwood I’ve been hearing his voice of reason. That I will carry with me forever.

My sympathy goes out to his wife, Patty and the family. You are in my prayers.

My sincerest regards on this sad occassion. I fondly recall our highschool days and Norms friendly/cheery spirit.

So sorry to hear about Norm, he was just a very good man & he will be missed by all who had the pleasure of knowing him. Sincerely Greg Green

Sorry for the loss of both your husband and father. He was such a kind gentleman. You are in my

Thoughts & prayers with you all, we’re remembering all the ball games.. Hugs :-

To all of Norm’s family – you are in my thoughts and prayers at this difficult time. May you find peace in all of the great memories you share of him. He was a wonderful man.

To Norm`s family; you all have my deepest sorrow for your loss. I worked at the Yorkville mill & remember the day ol` Norm joined us. Yorkville gained a very good employee, He and I were alike, we had fun but we made sure our work was done, So very sorry.

To Patty & all the Smith families. I am so sorry about your husbands passing. I know how hard it is to lose your best friend. You are all in my prayers. God works in mysterious ways. Take care & God bless

To Patty and all of Norm’s family,

My thoughts and prayers are with you all during this difficult time. Take comfort in knowing that so many lives were touched by Norm in such a positive way. He coached the girl’s basketball team when I was coming through and my life was much richer having known him.

To The Smith Family,

Enough has probably been said about the kind man that Mr. Smith was. Even after leaving Benwood years ago, any time I ran into him he always offered words of encouragement after ball games, always asked about my kids, and always wished me well. I cannot attend the funeral, but all of you are in my thoughts and prayers. He was a wonderful man and will be missed greatly by many.

To The Smith Family,

My thoughts and prayers are with you all at this difficult time. What a wonderful legacy “Coach Norm” has left – I will always remember his passion and enthusiasm when coaching – his smile was one you will never forget. Certainly, he was an inspiration to so many young people throughout the years and will always be remembered.

To the Smith family,

So sorry to hear about Mr. Smith. I always thought of him as one of “Life’s Good Guys”. A group which unfortunately seems to be leaving this earth and not always being replaced. If the “goal of man” is to leave the world a better place than when you got here, Mr. Smith accomplished it. One only needs to look at his children and grandchildren to realize he reached it. I’m sure he’ll be missed and remembered by all whose lifes he touched during his time in this world.

To The Smith Family:

My deepest sympathy. Smitty was a great guy. I saw him a few months ago at the hospital when his grandchild had just been born. He was smiling from ear to ear. He was all about family!

We love you Uncle Smitty, you will be in our hearts forever. God bless you Patty and family, we love you.