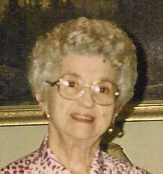 The visitation will be held on Sunday, August 1, 2004 from 7:00pm to 9:00pm in Altmeyer Funeral Home. The funeral service will be held on Monday, August 2, 2004 at 11:00am in Heritage United Methodist Church at 715 Baker Road, Virginia Beach with burial to follow in Woodlawn Memorial Gardens.

In lieu of flowers, donations may be made to Heritage United Methodist Church.

How wonderful it was to know Miss Nellie. We will always cherish her in our memories. Love and sympathy. Mel and Betty

It is always hard when losing a love one because we miss them very much. For that reason, we can be encouraged by reflecting on the promises that God has given us thru his word the Bible, concerning the hope of seeing our love ones again. I hope that you find comfort in reading these scriptures. John 11:11-44, John 5:21, 28, 29 and Revelation 21:4. My prayers are with your family.

I would like to say, that it is a privileged to have known your loved one. I am a volunteer at the facility where she abode. I will really miss her as she was dear to my heart. My prayers at this time to the family. God bless you all,

Very sorry to hear of your loss. You are all in my prayers and memories.