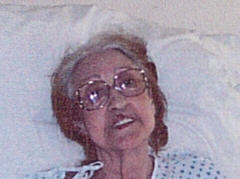 Nellie Grace Iannone Harper, 81, of Jacksonville, Florida, died Saturday, May 4, 2002 at her home. She and her husband formerly resided in Martins Ferry and moved to Jacksonville in 1951. During World War II she worked at the Martins Ferry, Blaw-Knox Plant and later at the Cleveland Graphite-Bronze Company, Bridgeport. She was a Methodist by faith. Nellie has been a member of the Martins Ferry, recently merged with the Bridgeport chapter, Order of the Eastern Star for over 50 years. She was preceded in death by her parents, Vito A. and Rhea Milbaugh Iannone. Surviving are her beloved husband Harold R. Harper, whom she married on April 29, 1939, 63 years ago. Also surviving are three brothers, Herbert Iannone of ElPaso, Tx; Donald Geri Iannone of Tupelo, Miss. and Edward Dallas Iannone of Cape Coral, FL; three sisters, Mildred Jackson of Ghanna, OH, Ruth Boyles and Jean Sexton both of Columbus, OH, all formerly of Bellaire, OH.; several nieces and nephews. Nellie will be missed by a host of friends in Florida, Columbus and the valley. Friends will be recieved, Thursday, May 9, 2002 from 11:00 am until time of service at 1:00 pm with the Rev. Sue Tomlinson officiating, at the Altmeyer Funeral Home, 118 Grant Avenue, Moundsville, WV 26041. Interment to follow in Greenwood Cemetery, Wheeling, WV.

I’m so sorry we couldn’t make it to the services. We tried so hard to get back to the Valley. It was always so wonderful and exciting when you and Aunt Nellie would visit. I’ll miss her very much. Please know that our thoughts and prayers are with you. I love you.

We are so sorry that we were unable to attend the services, but you are in our prayers and we will be in touch when you return to FL. Charles and Brenda