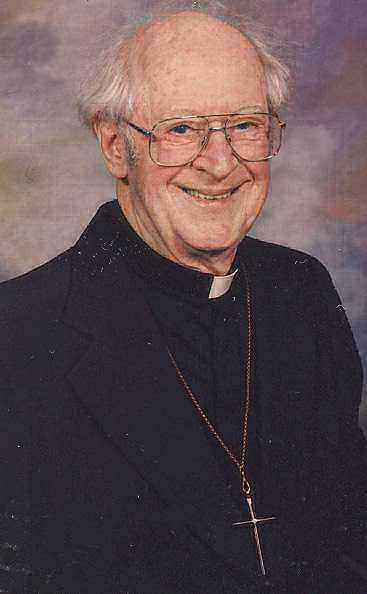 STAUD, Msgr. Sylvester W., died Sunday December 30 2007 in Wheeling, W.Va, at the age of 93.
A Fairmont native, Msgr. Staud was born September 27, 1914, the son of the late Aloysius and Anna Eleanor Grottendieck Staud.
He completed his preparatory studies for the priesthood at St. Charles Preparatory College and St. Mary Seminary and University, Baltimore, Md.
Msgr. Staud was ordained to the priesthood May 30, 1942, at the Cathedral of St. Joseph in Wheeling, by the late Archbishop John J. Swint.
Msgr. Staud was pastor at St. Matthew Parish in Ravenswood, W.Va., from 1982-1995 until his retirement. He also served at the following parishes during his 65 years as a priest: St. Joseph, Huntington; Our Lady of Victory, Gary; St. Francis de Sales, Beckley; St. Paul, Weirton; Sacred Heart, Huntington; St. Agnes, Charleston; and St. Jude, Radford, Va.
He was appointed an apostolic prelate in June 1968 by Pope Paul VI, allowing him to be addressed as Monsignor. Msgr. Staud served as a diocesan consulter, dean of the Weirton and Huntington deaneries, a member of the State of Priests personnel board, a moderator for the Diocesan Council of Catholic Women, and was active in ecumenical programs in Weirton, Radford, Huntington, Charleston and Jackson County.
While in Ravenswood, Msgr. Staud introduced the practice of the parish tithing its Sunday collections to a special account to help those in need of emergency assistance. A staunch supporter of those in need, Msgr. Staud was concerned about such basic needs as utilities, rent and prescription medicine for those who could not afford them. He also supported literacy programs so that those with low reading levels could work to reach their full potential.
Msgr. Staud was one of seven children, all of whom attended Catholic school for 12 years at St. Peter Parish in Fairmont. Msgr. Staud is survived by three sisters: Sr. Marjean Staud, C.S.J., and Sr. Martina Staud, C.S.J., of Wheeling; and Rita Blazek of Cleveland, OH; one brother, Mr. Aloysius

Know that you are in my prayers at this time. I shall miss sharing with Msgr from time to time. He was such a joy for me.

My belated condolences to Msgr. Staud’s family. I was fortunate to have Msgr. Staud at Huntington St. Joe as my teacher, confessor and basketball coach. One thing I will always cherish about his memory is that he worked with Coach Zelma Davis of Douglas High School to start a basketball series between St. Joe and Douglas an African-American school. This occurred before the end of segregated schools. He was ahead of his time in this regard. Thank God for him.

Our prayers are with Msgr. Staud and his family. I was one of his alter boys, in the late 50’s and early 60’s at Our Lady of Victory Church, in Gary.