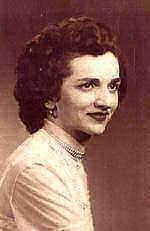 Pelley, Millie C., 87, of Wheeling , W.Va. died Sunday December 18, 2011 in Liza’s Place, Wheeling.
She was born March 7, 1924 in Wheeling, a daughter of the late John and Zarefee Naufel Thomas.
In addition to her parents she was preceded in death by two sisters, Madeline Blaha and Martha Thomas; a grandson, Jacob Pelley.,
Millie was a homemaker, a member of St. Michael’s Catholic Church, Wheeling, and the Christian Mothers. She loved to bake and made excellent bread. Every Saturday she would make breakfast for her brothers. She was also an avid sports fan especially, Notre Dame and the Steelers. Millie was a loving and caring mother, grandmother, and great-grandmother, and will be greatly missed by her family and friends.
Surviving are a son, Jerry Susan Pelley of Wheeling; two daughters; Janice Frank Wilson of Wheeling, and Teri Donald Dodd of Frederick, MD ; two brothers; Samuel Idele Thomas, and George Mary Thomas all of Wheeling, nine grandchildren, two great grandchildren, and several nieces and nephews.
Friends received 4- 8pm Wednesday at the Altmeyer Funeral Home, 1400 Eoff Street, Wheeling, where Rosary service will be held at 5pm.
Mass of Christian Burial will be celebrated at 11am Thursday, December 22, 2011 at St. Michael’s Catholic Church with Rev. William K. Matheny, Jr. as celebrant.
Interment in Greenwood Cemetery, Wheeling at the convenience of the family.
Memorial contributions may be made to Liza’s Place, 100686, State Route 150, Rayland, Ohio, 43943
Online condolences may be made to altmeyer.com

Sorry to hear of your mother death,Iam sure you will miss her a lot.

I am leaving tomorrow morning for a week, will not be able to visit.

Millie was our neighbor on Era Street. She was so very kind to our family. We especially remember her awesome bread!!! Audrey and I would on occasion visit with her in her kitchen and hear stories of her youth. She would often share her mints with the kids and ask about their day as we visited on our porch. She inspired us to be our best. We will miss her physical presence but her memory will remain will us always. May God bring you peace at this time of loss.

You have my deepest sympathy at this time of loss. My thoughts and prayers are with you and your family. Remember, if you ever need to talk, I’m here.