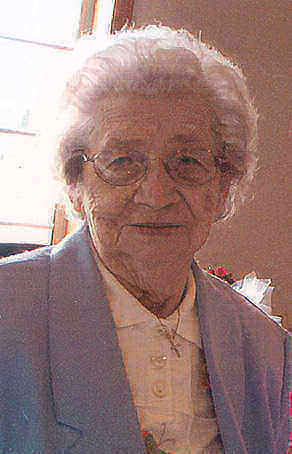 Mary was born February 8, 1920 in Pennsylvania, the daughter of the late Stanley and Anna Gadomski Bugay of Belmont, Ohio.

Mary and her late husband, Ted had lived most of their lives and raised their family in Blaine and had been members of All Saints Catholic Church. After Teds passing, Mary had lived with her son Virgil and his wife Charleen and had attended St. Mary’s Catholic Church in St. Clairsville.

Mary loved to cook and she and her husband Ted enjoyed getting the family together for her fantastic meals.

Mary was preceded in death by her loving and devoted husband Ted, sister, Stella Gaidos of Morristown, Ohio and brothers Walter of Belmont, Stanley of Cambridge, Ohio and John of Flushing, Ohio.

Friends will be received on Thursday from 2-4 and 6-8 pm at Beck-Altmeyer Funeral Home & Crematory , 204 West Main Street, St. Clairsville.

Funeral liturgy with mass will be celebrated on Friday at 10 am at St. Mary Catholic Church with Fr. Michael Gossett as celebrant.

Burial follows in Belmont County Memorial Park Cemetery, St. Clairsville. A vigil service will be held Thursday at 3:45 pm in the funeral home.

Memorial contributions may be made to St. Mary Catholic Church, Alzheimers Association or the donors choice in Mary’s name.

Special thank to those Staff/Caregivers at Forest Hill Retirement Community who gave their love and care of Mary in her final years.

Share your thoughts and memories of Mary with her family at altmeyer.com

Markovich family know of my prayers and thoughs at the passing of Mary. May she rest in peace.

So sorry to hear of your mothers death. I remember her well, sitting on her porch at the Blaine home…Always a wave as I would walk by… She lived a long life and I am sure all your wonderful memories of her will help you through this time.. Just knowing she is in a better place and at peace should help you through your grief…Love and Prayers to you and your family at this time