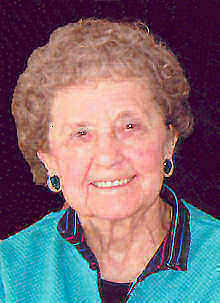 Martinkosky, Mary F. “Mirandy” Gorczyca, 88, of Wheeling, died Friday at OVMC.
She was born in Wheeling WV, on January 10, 1921, daughter of the late Anthony J. and Katherine B. Stepien Gorczyca.
Mirandy was a member of the former St. Ladislaus Catholic Church, Wheeling, a former employee of Stone & Thomas, Sylvania Electric, and Marx Toys. She was also Secretary to Thursday Night Guild and former treasurer of the Polish Roman Catholic Union of America, Society #213. She loved to play bingo, cards and dominoes.
In addition to her parents, she was preceded in death by her husband of 56 years, Teddy P. Martinkosky in 2003; five brothers, Stanley, John, Joseph, Walter, and Frank; three sisters, Helen, Rose and Stephanie; four nephews and a niece.
Surviving are two sons, Richard Martinkosky his wife Phillis of Wheeling, Ronald Martinkosky and his wife Kathleen of Bridgeport Ohio, a daughter, Janet Cunningham and her husband Charlie of Wheeling.
She is also survived by two grandsons, Matt Cunningham and his wife Leah of McMechen and Alex Martinkosky and his wife Christina of Washington DC; four granddaughters, Wendy Tronka and her husband Michael of Lansing Ohio, Carrie Gralinski and her husband Shawn of Martins Ferry, Ohio, Mareesa Cunningham of Wheeling and Amy Martinkosky of New York, NY; four great-grandchildren, Celeste and Colleen Tronka of Bridgeport, Ohio; and Kaden and Kylah Cunningham of McMechen; one sister, Jennie Zelkowski of Wheeling; two brothers, Casimir Gorczyca of Woodsboro, Md; and Edward Gorczyca of Wheeling; and several nieces and nephews.
Friends will be received 2-4 and 6-8 p.m. Monday at the Altmeyer Funeral Home, South Wheeling Chapel, 3828 Jacob Street, Wheeling, where vigil services will be held at 3:30 p.m.
Mass of Christian burial will be celebrated at 10 a.m. Tuesday, September 15, 2009 at St. Alphonsus Catholic Church, Wheeling, with Rev. Chuck McGinnis as celebrant.
Interment in Mt. Calvary Cemetery, Wheeling.
Offer condolences online at altmeyer.com

Dear Family–To let you know so many thoughts and prayers are with you and yours–Take care–Keep the faith and May God Bless you with His Peace and Love–“When someone you love becomes a memory-that memory becomes a treasure!”–Sincerely, Sylvia McNeil aka Bilo/Benwood

I am so sorry to hear about the loss of Mirandy. She was a very special and faithful woman that loved her family, her friends, her church, and the Almighty.

I am very fortunate that while growing up Mirandy and her family played a part in my upbringing. I will always remember those special times together that molded all of us.

Mirandy set a wonderful example that when your children are all grown up that you don’t stop doing things for your community. Also, Mirandy set another example and that was to always help family which she did until unable to.

I am so thankful that one of the last pictures I have of Mirandy and my Mom are of those two walking off with their walkers — what a classic picture! Unfortunately for us, they both walked into the sunset of life this year and left us behind to hold them forever in our hearts.

Please keep the faith during these times and know that she is with the Almighty,’HER MAN’, and all of those that went before her. She is being well cared for and loved.

In Lieu of flowers, there will be a contribution made to Faith in Action in Memory of Mirandy. I am sure that they will send a notification to the family.

Once again — I am so sorry for your loss and please rest assured that “HE” will guide you thru these difficult times.

We are sorry for the loss of your mother. This is a difficult time and God will give you strength to deal with your loss.

My deep sympathy goes out to your family for your loss. Mary was an amazing person. I got to know her and her family by working on a history of the Poles of South Wheeling, and early on she was one of the nicest and most open people in assiting me. From her stories, I could see how her faith and strong community-centered worldview benefitted all those who knew her.

Our heartfelt condolences in your loss. Our thoughts and prayers are with you.

Please accept out deepest sympathy. You know we are here if there is anything we can do.

Rick, I was sorry to hear about your Mom’s Passing. You know my Mom died last September so they can get together and have fun like they used to when they worked together. My thoughts are with you.

Ricky, Ronnie and Janet, So sorry about your mom. I know how difficult this is because I just lost my mom a few months ago. Your mom was a big part of my life growing up and I spent alot of time at her house with her and Carrie and Wendy. I looked up to her and loved being at her house. She always made me feel special and loved. There are so many fond memories of her that she will always be in my heart. Thinking of you all. Char

So sorry to hear about your Mom.

I always had good memories of being

at your home,hearing your Mom tell

Stories about my Dad.You’ll all be

So sorry to hear of Mirandy’s passing. I remember when Janet and I were in high school, I spent a lot of time at their home, and Mirandy was always feeding us and putting up with our nonsense. She had a great sense of humor and was a very kind lady. Condolences to Ronnie, Ricky, Janet, and the whole family..

To the entire family….my thoughts and prayers are with you at this time and all the time…Coici Mecca was a wonderful woman and always treated everyone great…she definitely will be missed. Sorry i could not make it home but know that distance does not really matter…being close to someone is an affair of the heart!!!

I AM SORRY FOR YOUR LOSS, MIRANDY WAS A GREAT PERSON, AS YOU ALL KNOW HOW WONDERFUL SHE WAS. SHE WILL BE TRULY MISS BY ALL. MY HEART GOES OUT TO ALL OF YOU. MAY GOD BLESS.

We are so sorry for your loss, but you are in our thoughts today and always.