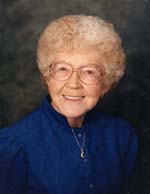 Mary was born August 15, 1922 in Mount Pleasant, Ohio, a daughter of the late William Dunn and Margaret Cotts Whitecotton. She was a homemaker and attended the Assembly of God Church, Valley Grove, W.Va.

Friends will be received from 2-4 and 7-9 pm, Wednesday at Altmeyer Funeral Home, Elm Grove Chapel, 154 Kruger Street, Wheeling, where funeral services will be held at 11 am, Thursday, July 23, 2009, with the Rev. Roger Rakon officiating. Interment will be in Greenwood Cemetery, Wheeling.

Memorial contributions may be made to the American Cancer Society.

DEAR DAVID AND FAMILY, SO SORRY TO HEAR OF YOUR MOTHERS PASSING. SHE WAS SUCH A BEAUTIFUL LADY, AND I SO MUCH ENJOYED TALKING TO HER. MARY JANE SURELY WILL BE MISSED. TAKE CARE OF EACH OTHER. WITH PRAYERS AND LOVE, SUE

SO SORRY TO HEAR ABOUT YOUR

MOM. SHE WAS A SWEET LADY.

GOD BLESS YOU ALL.