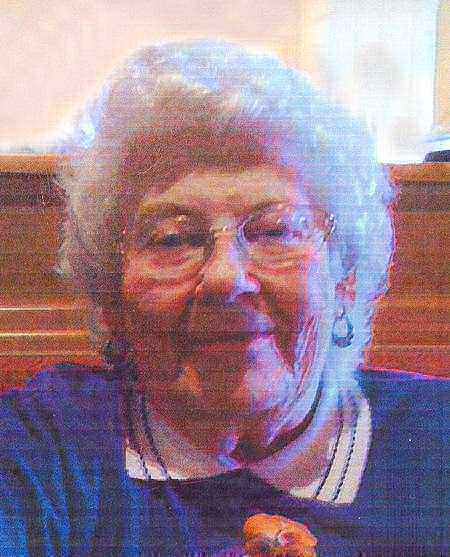 Feist, Mary Eva Wright, 87, of McMechen, WV, passed away on Monday, September 24, 2012 at Ohio Valley Medical Center, after a brief illness.
Mary was born July 14, 1925 in South Wheeling, WV, daughter of the late Raymond and Eva Wright.
She was retired from the West Virginia State Police, having served the state for over 40 years, including being the chief radio operator in the Moundsville barracks. It was her honor to have worked with so many fine state troopers.
Over the years, Mary enjoyed talking with family and friends, trailer traveling with the love of her life, the late Edgar Elwood Feist, her husband of 59 years; caring and loving consecutively for five toy Pomeranians; playing the organ; watching WVU and Pittsburgh Steelers football games; and, in later years, learning how to use her computer and an iPhone. Mary was a member of the McMechen-Benwood United Methodist Church.
In addition to her parents and husband, Mary was preceded in death by her brothers, Raymond Wright and Emory Wright.
Surviving are a sister, Dorothy Wright Kiger of Wheeling; her two daughters, Mary June Kenneth Derbenwick of Ormond Beach, FL and Carol Lee Ralph Strope of Celina, OH; four grandchildren, Keith A. Susannah Derbenwick, Kathy A. Derbenwick Thomack, Steven M. Cynthia Strope and Kevin M. Strope; four great-grandchildren, Kelsey Strope, A.J. Strope, Max Derbenwick and Clara Derbenwick; several nieces and nephews.
Friends will be received from 6-8 pm Wednesday at the Altmeyer Funeral Home, 214 Marshall Street, McMechen, where funeral services will be held at 11:00 am Thursday, September 27, 2012 with Rev. Glen Baker, Jr. officiating.
Interment in Northview Cemetery, New Martinsville, WV.
Online condolences may be expressed at altmeyer.com.

“When someone you love becomes a memory, the memory becomes a treasure”.

In hearing the wonderful stories of her over the years I know she holds a special place in your hearts.

My thoughts and prayers are with you always.

So sorry to hear about your Mother passing away. Please offer our most sincere condolences to your entire family. We will keep you in our prayers. Robin and John Harto

Dear Carol and Mary June To let you know so many thoughts and prayers are with you and yours Take care Keep the faith and May God bless you with His Peace and Love “When someone you love becomes a memory, that memory becomes a treasure!” so very sorry for your loss Sincerely, Sylvia McNeil aka Bilo UHS Class’65 “Band”

Dear Mary June and Carol; I many fond memories of both of your parents living near; your home in McMechen

My thoughts and prays are with you.

Dear Mary June and Carol…I have very fond memories of your parents..we were neighbors for many years.I am so sorry for your loss.

I’m so sorry to hear about Mary. She was like a grandmother to me. My thoughts and prayers go out to all of her family and friends. She will be missed. <3

Mary June and Carol, Vici and I want to express our condolences on the death of your mom. When I lost mom in 2003, it was like looseing my best friend. I will always remember the good time with your family on our visits to your house. Your dad would always buy the best pizza. Your mom would take us to the police station and show us what she did with the radio dispatch.

Mary was like a grandmother to me. My prayers go out to the friends back in McMechen, to Mary June, Ken, Carol, Ralph, Keith, Kathy, Steven, and Kevin. And to the WV State Police family.

My dad, the late Robert “Bob” Stewart, was Eva’s brother. I can remember visiting with Aunt Mary and Uncle Edgar when we would take our annual vacation to West Virginia from our home in Mississippi. My thoughts are with you during this time and my prayer is you will allow God to strengthen and comfort you.

My late father, Robert Stewart Mary’s Uncle Bob and my late Mother Aunt Stella always made a point to stop by visit on our trips back to WV after leaving when I was 8 years old. Many memories come flooding back. Our thoughts and prayers are with the family during this sad time. Rock Bobby and Jayne.

So sorry for your loss. A Mother is such a special person. With you in thoughts and prayers. Sandy