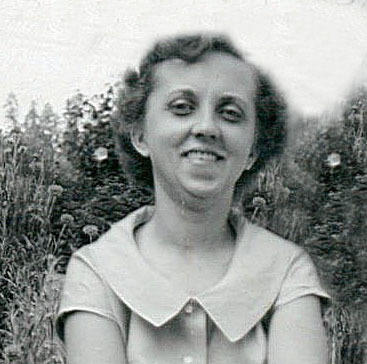 Bugaj, Mary A Golebiewski, 91, of Wheeling, WV, died Wednesday, August 21, 2013 at Good Shepherd Nursing Home.
She was born May 15, 1922 in Wheeling, the daughter of the late John and Veronica Furtak Golebiewski.
Mary was a member of St. Joseph Cathedral, a homemaker, a member of the AARP-Wheeling Senior Citizens. She held various jobs through out her life, she worked at the Hub, Louis Marx Toy Plant and was an Avon Rep. for many years.
In addition to her parents, she is preceded in death by her husband, Walter Stanley Bugaj 1983; son, William “Bill” Bugaj 2003; two brothers, Bernard and Carl Golebiewski and a sister, Stella Yingling.
Mary is survived by her son, Walter Stephanie Bugaj of Wheeling; two grandchildren, John and Rachel Bugaj of Wheeling and several nieces and nephews.
Friends will be received at Altmeyer Funeral Home, Wheeling Chapel, 1400 Eoff Street Friday, August 23 from 9:30am until the time of service.
Mass of Christian Burial will be at 11am Friday, August 23 at St.Joseph Cathedral with Msgr Kevin Quirk serving as celebrant.
Interment will follow at Mt. Calvary Cemetery, Wheeling.
Memorial contributions can be made to the American Lung Association at 1301 Pennsylvania Avenue, NW, Suite 800, Washington DC 20004.
On line condolences can be made to altmeyer.com .

Sorry to hear about your mom Walt. We’ll keep you in our prayers.

Wally and family, I’m so sorry to hear about your loss. I’ll always remember how nice your Mom was to me when I moved to Grandview Street when Jim and I first got married. Those were wonderful memories and wonderful neighbors.

Walt, Stephanie and family so sorry to hear about your Mom. Wish we could have stopped to see you but working, I’m sure you know how that is. Thinking of you and in our prayers.

We are very sorry to hear of the passing of Mrs. Bugaj. She was a special lady. GOD BLESS you and your family.